What a year! Here's what Ireland Googled the most in 2021

Google, the world's most popular search engine, has released its annual "Year in Search" results for Ireland, revealing the trending people, events, and concerns of 2021. 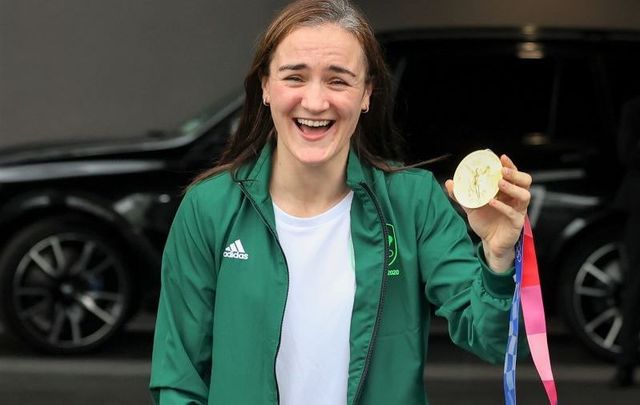 August 10, 2021: Boxer Kellie Harrington returns to Ireland after winning a gold medal at the 2020 Tokyo Olympics. Harrington was one of the most Googled people in Ireland this year. RollingNews.ie

The European Championship, COVID-19, Christian Eriksen, "Bridgerton," and Kellie Harrington were among Ireland's most searched for topics on Google this year.

Google, the world's most popular search engine has released its annual "Year in Search" results, revealing the trending people, events, and concerns of 2021.

"Premier League" was the second most searched for topic of the year, followed by "Coronavirus" and "Seesaw."

COVID-19 and concerns about the pandemic continued to predominate, with "How to register for the COVID-19 vaccine" the top how-to topic Googled in Ireland this year.

"How to do an antigen test" and "How to book a COVID-19 test" also made the top five in the how-to category.

"How to make iced coffee" and "how to get rid of fruit flies" were the other top how-to questions in Ireland.

After Christian Eriksen, the most searched for person was Gordon Elliott, who was banned by the Irish Horseracing Regulatory Board for a picture which circulated online showing him sitting on top of a dead horse, according to BreakingNews.ie.

The third most Googled person in Ireland was actor Alec Baldwin, who was holding the prop gun that accidentally went off on the set of his movie "Rust," killing cinematographer Halyna Hutchins.

He was followed by former UK health secretary, Matt Hancock, who was forced to resign his post after CCTV footage, which showed him breaching social distancing rules by kissing an aide, went viral online, reports The Irish Examiner.

Netflix's "Bridgerton" was the most searched for topic in the television category, followed by "Squid Game," "Love Island," "Eurovision," and "Mare of Eastown."

"Red Notice" topped the movies category, with "Dune" coming is as the second most Googled film of the year. "Eternals" was the third most searched for film, before "No Time to Die" and "Suicide Squad."

The most searched for recipes online were for "Pancakes" at number one, followed by "Waffles," "Shepherd's Pie," "Pizza dough" and "Carbonara."

Globally, "doomscrolling," "affirmations," "how to start a business," and "soulmate" were among the most searched for topics around the world in 2021.