As the introduction of prohibition reaches its 100th anniversary, it is fitting to reflect on what was a turbulent era for a now bustling Irish whiskey industry. 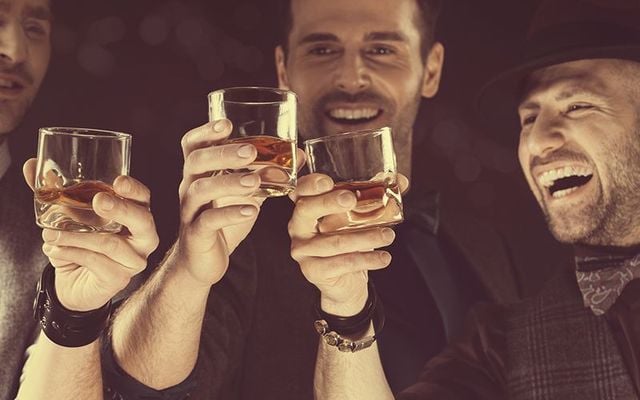 Irish whiskey: The industry was almost decimated by the United States Prohibition. Getty

As the introduction of prohibition reaches its 100th anniversary, it is fitting to reflect on what was a turbulent era for a now bustling Irish whiskey industry.

The 18th Amendment to the United States Constitution, which outlawed the production and sale of alcohol in America for more than 13 years, commonly known as The Prohibition, almost decimated the Irish whiskey industry - an industry that was already close to breaking point.

Prohibition went into effect on January 17, 1920, and ceased after the passage of the 21st Amendment on December 4, 1933 - to this day it is the only amendment to the constitution that has since been reversed.

The law had a pernicious effect on Irish distilleries, who had become increasingly reliant on American trade in the wake of Irish independence.

Prior to Ireland’s break with the British empire, Irish whiskey was by far the most popular whiskey in the world and distilleries and breweries accounted for a whopping 40% of Dublin's employment at the beginning of the 20th Century. Whiskey distillers also enjoyed a strong presence in Derry, Belfast and Cork, with the New Middleton distillery in the Rebel County capable of storing 1.5 million gallons of whiskey.

The Irish whiskey industry reputedly enjoyed a 70% share of the global market and the vast majority of that industry was controlled by four moguls - John Jameson, William Jameson, John Power and George Roe.

However, just 33 years into the 20th Century that dominant industry would lay in tatters due to the coalescing of a number of ill-fated factors.

To understand the fall of Irish whiskey, one must travel back to 1830, almost a century before prohibition was implemented.

Aeneas Coffee, an Irishman, patented a new technology to distill whiskey called the column still. The technology greatly increased the efficiency of whiskey production, but the majority of Irish distillers shunned the new innovation, favoring a traditional pot still. The four main distillers even questioned whether the grain whiskey the column still produced was even whiskey, as opposed to the conventional malt whiskey.

The same cannot be said for their Scottish counterparts, however, who embraced the new invention and saw an eventual boom in the production of scotch whiskey.

A second blow to the Irish whiskey industry came in 1922 with the birth of the Irish Free State.

After ties were severed with Britain, distilleries lost key connections with colonial members again bolstered the Scottish industry which had no such problems.

Then, as now, however, Irish whiskey’s biggest consumer had been the American market.

Read more: World’s finest collection of whiskey to sell for over $8m at auction

The introduction of prohibition at the dawn of the 1920s would signal a death knell for an already dying industry and drive it towards extinction.

The Irish whiskey industry was again beaten by the Scots during America’s 13 dry years.

Scottish distilleries were able to make use of America’s neighbor, Canada - still a British colony during the years of prohibition - to import outlawed whiskey into the US. Irish whiskey producers were afforded no such opportunity and lost a huge portion of the American market to the Scottish. The crushing blow caused the Irish whiskey to go into an unprecedented decline and the end of prohibition brought no reprieve.

Scottish dominance in the American market, coupled with limitations placed on exports by the Irish government, meant that Irish whiskey companies simply could not compete in the United States.

It was the 1980s before Irish whiskey emerged from its downward spiral. By then, only three distilleries remained.

If Irish whiskey’s fall from grace in the 20th was staggering, however, its revival over the last 40 years has been equally mind-boggling.

The number of distilleries on the Emerald Isle has sprouted exponentially to 35 in less than four decades. The number of cases produced on the island has also increased from a nadir of 200,000 crates per year in the 1980s to roughly 12 million now.

By far the most popular Irish whiskey, Jameson sells two out of every three bottles of Irish whiskey sold throughout the world.

Its parent company, Irish distillers, has also led the resurgence of Irish whiskey by providing access to aged stocks and innovative technologies for fledgling distilleries.

With Jameson at the forefront, Irish whiskey is beginning to get back to its rightful place as the world’s leading manufacturer. Here’s hoping it won’t be long before it is the top dog in the United States again.