Ireland’s potatoes save millions from famine and drought in Ethiopia

Ireland’s potatoes save millions from famine and drought in Ethiopia 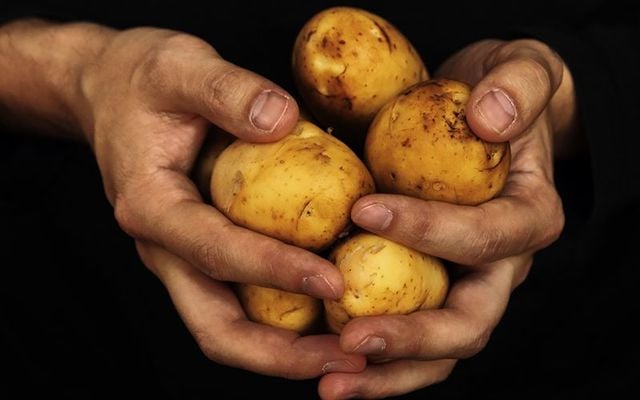 Irish potatoes are being praised for preventing another major humanitarian food crisis in one of the poorest and most remote parts of Ethiopia. iStock

Irish potatoes are being praised for preventing another major humanitarian food crisis in one of the poorest and most remote parts of Ethiopia.

The famed Irish spud is credited with a major drop in food shortages in the drought-prone northern highland regions of South Wollo according to Concern Worldwide who introduced the crop to the region in 2007.

The vegetable is thriving where other crops had failed to grow at 10,000 feet above sea level and improvements in the local economy are also being attributed to the potato after it made harvests more resilient to drought.

The famed Irish spud is credited with a major drop in food shortages in the drought-prone northern highland regions of South Wollo, Ethiopia. Image: Getty

Concern recently received confirmation of the crop's success when four districts, Dessie Zuria, Tenta, Legambo, and Delanta, which were classed as hunger hotspots, were found by a joint UN/Ethiopian government body to no longer be in immediate need of humanitarian assistance.

The four districts have a combined population of over 704,000 people.

The project began 12 years ago, with 16 farmers agreeing to grow the potato and today more than 12,000 farmers have opted for the potato over growing barley.

South Wollo, which is one of 10 zones in the Amhara Region of Ethiopia has now been taken off a UN hunger hotspot list and Concern Worldwide is now planning to phase out its work in the region.

South Wollo, which is one of 10 zones in the Amhara Region of Ethiopia. Image: Google Maps

Eileen Morrow, Concern’s Ethiopia country director, said that the project was a “massive change” for the locals and that nobody had wanted it at the beginning.

“This incredible success has broken the cycle of dependence on emergency relief and restored dignity and hope in areas that have been hit by recurrent disasters," Concern’s Ethiopia Country Director, Eileen Morrow, told the Irish Sun.

Read More: Man eats only potatoes for one year to cure his food addiction and depression

"It is very challenging to increase the yield of crops in high altitudes. Very little can thrive at 10,000 feet, but the Irish potato has proven to be a rare exception."

“When I first visited our projects there in 2016 during a major drought in the country, it was a real surprise to see potatoes growing so successfully at an altitude that had me struggling to breathe.”

Workers move sacks of emergency food supplies in and out of Ethiopia's largest "strategic grain reserve" depot in Adama, on February 13, 2016. Image: Getty

Morrow said the Irish potato was key to solving the biggest challenge faced by the highland population of Ethiopia.

“We improved the varieties of potatoes available, namely Belete, Gudeni, and Jaleni,” she said.

They have turned out to be very resilient and productive in drought-affected highland areas, while other main crop staples like barley withered.

The Irish potato is thriving in South Wollo where other crops had failed to grow at 10,000 feet above sea level

“Initially, potato farming was a hard sell. Families here were used to eating barley and they were dependent on it for their livelihoods.

“We decided to focus on younger generations and eventually we managed to convince 16 youths to pilot potato farming on small plots of land – and now the entire region is reaping the awards.

“Extremely poor people in the highlands who would normally be experiencing extreme food shortages are instead generating profits and are no longer dependent on the government social protection scheme.”

She said that despite this success, many other parts of Ethiopia are still vulnerable to climate change and this year 8.86 million women, men and children are in need of humanitarian assistance due to the effects of drought.

“To break the cycle we need increased investment and Irish Aid and the Irish public have been tremendous supporters of this,” she added.

Read More: How to peel an Irish potato

"Our experience in South Wollo shows that aid works and can dramatically improve people’s lives."

What are your thoughts on the Irish potato being so effective in Ethiopia?
Let us know in the comments below.