How to peel an Irish potato 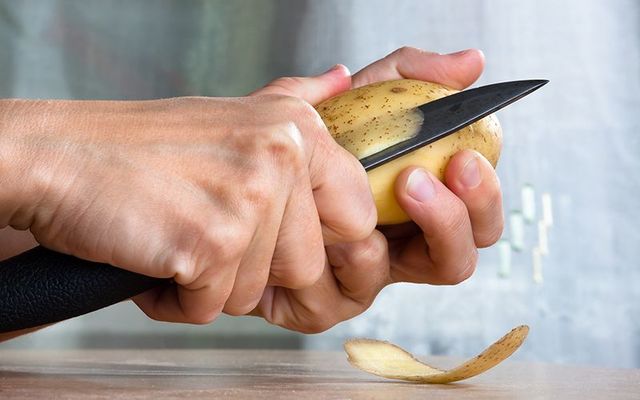 How to peel a spud? "They now have these new-fangled “peelers” that make the job fast and easy. I am against them." Getty

In my old age, confined to my room, all I get to watch on the television is the Food Network. Oh, my God—God forgive me—but what they do to the natural vegetable of Ireland is sinful. Sure, the potato is as natural to Ireland as Eamon de Valera.

And don’t call it a Spud!

Before I go on, I am grateful to the great Niall O’Dowd of IrishCentral for giving me this opportunity to speak out. Obviously, Niall has a low threshold of literary, not to mention culinary, pain.

Since 1937 I have been confined—oh, excuse me, I meant consigned—to St. Colmcille’s Convent in Providence, Rhode Island. I must say, it’s a provident place to be either confined or consigned!

For years I was the cook. Nobody ever called me the chef. Now, when I watch the food network I see this Giada with her big bosoms parading around a pizza and I am disgusted. Then this Bobby Flay comes on and I wonder what the hell—I mean heck—is going on.

I don’t understand this world. I was born in 1930 and entered the convent in 1946. Then I was Sister Immaculate Conception, then they changed, for no reason I can discern, to my real name in 1971. It’s not easy, I assure you, going from an Immaculate Conception to a Madelyn Frances. Everyone in my family thinks it’s hilarious, but I don’t get the humor.

I am here to worship Ireland’s most precious product—the potato. The potato is what our home island of Ireland lived on. Do you know that before the Great Famine, the average Irish peasant ate 14-pounds of potatoes a day! I don’t know how they did it. As we all know in America today, those kinds of carbohydrates will pack the pounds on. What would Atkins think? But, I digress again.

How to peel a Potato

Today they have several ways to peel a potato. Some call it an “Irish Pris,” but I don’t know what they are talking about.

The best way is to take a very sharp paring knife and carefully cut into the skin, just enough to get below the skin, then carefully cut it away. Be careful! It might harm the young potato!

Now there are other theories on how to peel a potato. They now have these new-fangled “peelers” that make the job fast and easy. I am against them because my father, a fine man, told me never to get involved with “peelers,” ever. I don’t know why he was so adamant, but he sure didn’t like “peelers.”

After they are peeled, gently drop them into boiling water—as hot as the Romans put the ancient Christians into to—and let them boil as if they were sinners in hell taking their first shower—and after they fall apart, pull them out.

Now throw the disheartened prátaí into a pot and soak them with butter and milk. It should take about a half-hour to revive them, but then you have the perfect potato that only an Irishman could dream about—watery, soluble, and uneatable.

This is my last culinary tip to my people.

It’s time I read my emails for the day. If it wasn’t for Bill Donohue of the Catholic League and his bulletins of 17th-century Catholic hope, I don’t know how I would get through the 21st century.

* Sister Madelyn Frances O’Malley can be reached at St. Colmcille’s Convent in Providence, Rhode Island, where she is the quartermaster in charge of potatoes. Sister makes a dynamite colcannon, one serving of which will stay in your stomach for months during a cold winter.