Australian man Andrew Taylor loses over a 100 pounds by eating only potatoes for a full year. 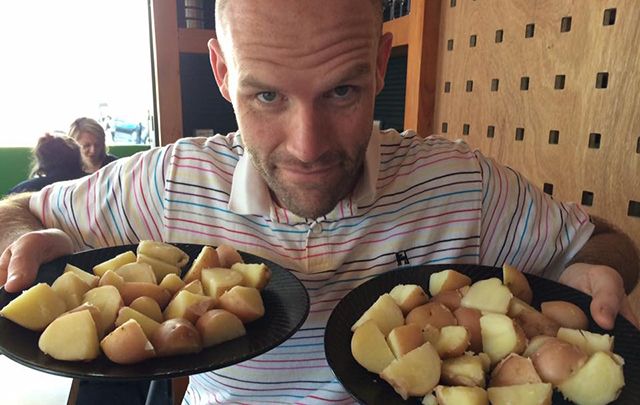 An Australian man spent all of 2016 eating nothing but potatoes in a radical attempt to change his life. At 335 pounds and suffering from depression, Andrew Taylor realized he needed to do something extreme if he was to kick his self-confessed food addiction and picked the spud as his best way to go about it.

Although receiving heavy criticism from health experts upon starting out the diet, Taylor spent the past 52 weeks eating potatoes and only potatoes, consuming anywhere between six and nine pounds of the starchy vegetable a day.

“I had a realization I was a food addict and it got me thinking about how if you’re an alcoholic, you quit alcohol or a drug addict, you quit drugs,” Taylor told an Australian news website.

“You can’t quit food, but I wanted to get as close as possible and wondered if there was one particular food I could eat, and potatoes came up best.

“You literally get everything you need from potatoes. Everybody knows they’ve got lots of carbs, but they have enough protein and fat and potatoes are really good for fiber, vitamin C, and iron.”

Having previously spent his days binging on fast food and soda drinks, and despite being told he would never last the whole year, the Melbourne resident lost 100 pounds since beginning the extreme diet last January 1, chronicling his progress on his Facebook page Spud Fit.

“At first lots of people made fun of me, but we’re Australian, that’s what happens,” he said.

“But as the year went on, people started realizing what sort of relationship I had with food and how much pain and suffering it was causing and they supported me and helped me do it.”

Taylor is not the first person to undergo this extremely Irish-friendly diet. In 2013, Chris Voigt, the head of the Washington State Potato Commission lost 21 pounds in two months while trying to prove to the state the benefits of the vegetable. The state health officials wished to ban potatoes from school meals and Voigt dropped his cholesterol by 60 points on a potato only diet in an attempt to show them that they contain all the right kind of nutrients.

Not only has his potato-only diet helped him with his weight-loss but he now feels happier than ever, beating off depression as his health improved.

“I was clinically depressed last year and eating potatoes has really helped me with that,” he told news.com.au.

“I am not taking any antidepressants and I feel like I’m completely over that and I’m sleeping better, too.

“Over the past 10 years, I’ve had joint pain from football injuries, but that’s gone away. Eating only potatoes has improved my life in more ways than I could ever imagine.

“I was going down a steep slope before the year started and this was about a lot more than losing weight for me. It was about me not being at all happy with the direction I was going in and where my life was headed. I’m really glad I stuck to my guns and did it. I’ve never stuck to anything in my life.

“I’m a much happier, more positive person. I have a lot more energy and am more creative.”

The journey was not always easy and for the first two weeks especially the Australian craved other foods. He stuck to his plan, however, even calling ahead to restaurants he was visiting to make sure he’d be able to have a plate full of potatoes while his friends chowed down on their own meals.

After his year-long endeavor, cravings for other foods have all but stopped and Taylor believes he’ll still be throwing back potatoes when his experiment ends on January 1, 2017.

“I do think the majority of what I eat will still be potatoes. I will have some more interesting toppings, I might make a bean chili or some coleslaw to put on top of the potatoes,” he said.

“Potatoes have been really good to me this year and I plan to continue eating them.”

Despite his cholesterol and blood pressure having improved, the diet was still criticized by his doctor as he went in for regular check ups during the course of the year but Taylor maintains that despite missing out on a range of vitamins and minerals, the potato diet was the best thing for him to do.

“One thing that always comes up is people think what I’ve done is really extreme,” he stated.

“I’d like to point out weighing 151.7 kilograms (335 pounds) is pretty extreme. Being overweight, sick and depressed, that’s an extreme situation to be in and I think desperate times call for desperate measures.

“If you want extreme results, you have to do extreme things. Yes, it’s extreme, but what’s wrong with that?”

Taylor will end his radical diet on January 1, 2017, with a fully catered party for his first real meal in a year but admits he may just stick with a bit of mash. We have some recipes we could recommend!

If you want to try the potato diet for yourself, check out the video below to see what’s involved.

Would you handle eating only potatoes for a full year or is this a dangerous health fad? Let us know your thoughts in the comments section, below?