Patrick Duffy, the man who played Bobby Ewing on "Dallas," and his partner, actress Linda Purl, are doing the rounds all over Ireland for their new show "Finding Ireland". 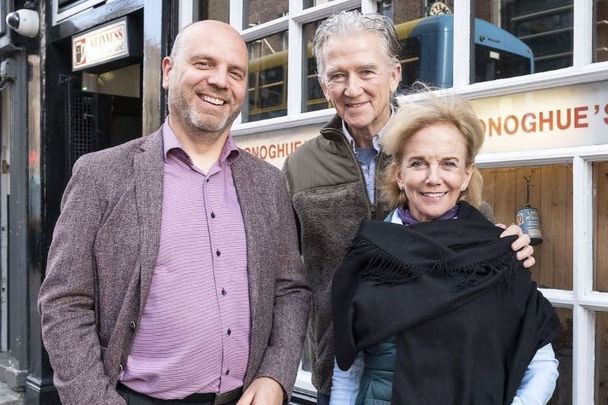 Maybe we’re dating ourselves here a bit, but "Dallas" has to be the greatest prime time soap that ever aired on TV, way before streaming or a zillion cable channels to choose from. It lasted from 1978 till 1991 and gave us the Ewing family, oil barons led by the dastardly JR (Larry Hagman), and his comparatively saintly brother Bobby, played by Patrick Duffy.

The great Hagman passed some years ago, and Duffy thankfully is alive and thriving. He’s currently in Ireland doing research for a roots program with his partner, actress Linda Purl, who he met during Covid lockdown (Zoom), and eventually in person when they worked on a project together. They’ve been happily together ever since and are doing the rounds all over Ireland.

"Finding Ireland" is the title of the show Duffy is working on, and it’s being supported by Tourism Ireland.

"Our aim is to encourage the diaspora in the United States to follow in Patrick and Linda’s footsteps and return to Ireland to trace their roots – and to showcase the wonder of a visit to Ireland to fellow Americans, whether they have Irish DNA in them or not,” Tourism Ireland central marketing director Mark Henry said.

The couple has been spotted at the Merrion Hotel in Dublin, Trinity College, a café in Co Longford, Hayfield Manor in Co Cork, and the parish of Kilmovee in Co Mayo where Duffy’s people came from.

Lovely to see US actor Patrick Duffy (remember Bobby Ewing ?) and his partner Linda Purl (remember Fonzie's girlfriend Ashley in Happy Days?) visiting Ireland this week. Tourism Ireland are working with Patrick to trace his roots in Mayo - a film will air in 2023 in the USA. pic.twitter.com/ru6YuzsbIX

"It seems that just about everybody around here carries the surname Duffy," the 73-year-old star said, according to a report on RTÉ.

That’s no lie. An 1853 valuation showed 70 Duffy property owners in Kilmovee, and Patrick visited an ancient graveyard, closed to the public, where multitudes of Duffys are buried. Duffy’s great grandfather Terence left home sometime in the 1800s.

RTÉ stated that the locals gave the American visitors a mighty welcome, with a meal of boxty, and bacon and cabbage. Father Joseph Gavigan, the local priest, was thrilled with the famous guests.

"Patrick Duffy’s ancestors left Ireland in difficult times. Their success as emigrants is one of the positive stories about the exodus from Ireland in the 19th century,” he said.

There’s a bunch of sightings of Patrick and Linda on social media, and a good few selfies. Each one notes how nice and accommodating the couple has been during their stay.

Former Dallas star Patrick Duffy found himself a four-legged friend on his visit to Kilmovee today!

Here he is pictured with Billy Reid and his dog Tess! Looks like Patrick and Tess have gotten very close 🐶 pic.twitter.com/7c7PMp6FxI

WATCH: We’ve finally got a trailer for Michael Flatley’s “Blackbird”