Will Ferrell has been all smiles in Ireland as he poses for pictures around Kerry, Cork, and Dublin in recent days. 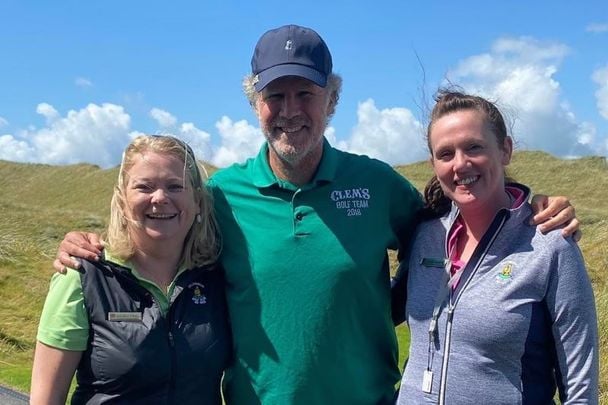 Will Ferrell is the latest Hollywood star to be spending time in Ireland this summer - the Irish American funnyman has been spotted in Dublin, Cork, and Kerry in recent days.

Ferrell made his latest Irish appearance at Ballybunion Golf Club in Co Kerry on Wednesday, where he was pictured having what could only be great craic with staff and golfers.

Earlier, on July 10, Ferrell posed for a picture with American tourist Jill Renee' Hill and her family outside The Spaniard pub in Kinsale, Co Cork.

The “Elf” star was reportedly in Co Cork to take part in the first-ever Hospitality Golf Classic at the Old Head Golf Club.

Will Ferrell has been following us around Ireland all day. We finally said Yes! To a picture. 🤷‍♀️😂

Teens Jamie Hayes and Ian Walsh told the Irish Examiner that they were shocked to bump into Ferrell in Co Cork.

“We were in Cork city, and we were heading home. We missed the bus, so it was like the stars aligned to meet him,” Hayes said.

“As we were pulling up to Kinsale to the town car park, he was literally walking next to the bus as we were getting off. Perfect timing. My friend spotted him yesterday and I was like, ‘isn’t that your man?’"

“We got the picture, and we were looking at each other and like what the f*ck just happened," Hayes said with a laugh.

“He was so nice," Hayes said. "He was genuinely the nicest person ever. All of his friends were nice as well and then he said, ‘yeah, we’ll take a picture with you’. So, we got a picture with him. Happy days.”

“He’s like he is in the movies. He’s just giddy and excited. It was like he met us. He was excited to take a picture with us.”

Last week, Ferrell stopped into Fade Street Social in Dublin, according to this picture shared on Instagram on July 8:

Ferrell has previously spoken of his Co Longford roots and told TV host Jay Leno how he and his family visited there in 2008.

“We took two weeks to travel around the countryside and stopped in County Longford. That’s where all the Farrells are from," he said.

"We wanted to do some research and we were told to go to Eamon Farrell’s pub, which is a real place. We went there in the afternoon and said hello and said we might stop by later that night.

"Well, we came by and there were literally a thousand people there who all said they were Farrells. I must have taken a hundred photos, and we ended up in some guy’s house at three in the morning, my body shaved.”

In 2017, Ferrell famously donned a Longford GAA jersey while doing promo for the movie "Daddy's Home" after he was gifted it by Today FM hosts Dermot and Dave a few years earlier.

Ferrell frequently leans into his Irish American background to draw a good laugh. On St. Patrick's Day 2015, he stopped by The Late Show with David Letterman wearing - of course - leprechaun garb.

In 2018, he apparently made it official and put down roots in Ireland - he is rumored to have purchased a house on the shores of Lough Sheelin in Mountnugent, Co Cavan.