Woods, who is in Ireland after taking part in the JP McManus Pro-Am at Adare Manor earlier in the week, flew into Ballybunion with McIlroy via helicopter on Thursday. 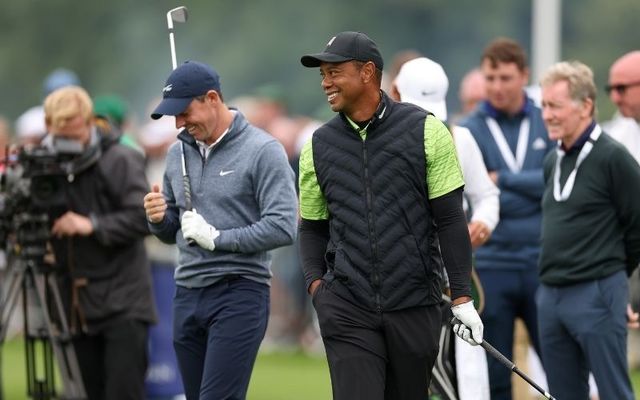 Rory McIlroy and Tiger Woods share a joke at the JP McManus Pro-Am at Adare Manor on July 4. Getty

Golfing superstars Tiger Woods and Rory McIlroy were left hugely impressed by Ballybunion Golf Course after the pair played a round on the Kerry course on Thursday.

Woods, who is in Ireland after taking part in the JP McManus Pro-Am at Adare Manor earlier in the week, flew into Ballybunion with McIlroy via helicopter on Thursday, with the pair looking to get some practice in on a links golf course ahead of next week's British Open at St. Andrew's.

Brian O'Callaghan, head of Professional at Ballybunion, told the Kerryman that the pair were blown away by the course, adding that they "really loved it".

"They loved it, they really loved it. They thought the course was just incredible and it [the course] is in great shape at the moment. They were awestruck by it," O'Callaghan told the Kerryman.

"They loved the whole course. Particularly when they got out onto the seventh tee and you're right out on the water and you hit the coastline, they both just went 'wow'. Rory took one look up the seventh and he just said 'oh god, this is nice'."

O'Callaghan added that both golfers enjoyed the privacy that Ballybunion offered, stating that they were able to play golf "like normal people".

"They were able to just speak among themselves and have nobody ear wigging them. They had a lot of fun out there and they were telling a couple of jokes and they just had a good time."

Earlier in the week, Woods confirmed that he would be staying in Ireland as he prepares for the British Open. He also spoke fondly about his visits to Ireland, recalling "some great times".

"I’ve always loved coming to Ireland. I’ve loved coming here since the first time, I think it was in ’99 when me, Payne, and Marco (Mark O’Meara) were over here and we were fishing down in Waterville here. We played Ballybunion. Payne made a hole-in-one. We’ve had some great times," Woods said after the JP McManus Pro-Am.

This was Woods' second time to take on Ballybunion and McIlroy's first.

Fifty Shades of weird for Dakota Johnson and Jamie Dornan