Tiger Woods, international pro-golfers, and a rake of celebrities received a warm céad mile fáilte at Adare Manor in Co Limerick this week for the JP McManus Pro-Am charity tournament. 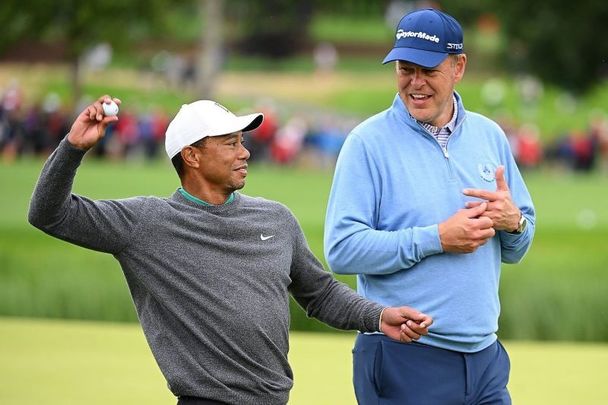 July 5, 2022: British entrepreneur Peter Jones (R) with playing partner Tiger Woods as they finish their round during Day Two of the JP McManus Pro-Am at Adare Manor in Limerick, Ireland Getty Images

Irish billionaire gambler and horse owner JP McManus’ Pro-Am event attracted 40,000 spectators on Monday and again on Tuesday to watch the golf action from 10 of the world’s top 11, led by Tiger Woods, who teed off alongside showbiz celebrities like actor/comedian Bill Murray, Belfast star Jamie Dornan, and singers Niall Horan from One Direction and Shane Filan from Westlife.

The welcome mat was rolled out for the celebrities at Adare Manor but the most exuberant céad mile fáilte – a hundred thousand welcomes – greeted Monday’s arrival of Woods, the real star of the show for the Irish crowd. He has attended the McManus Pro-Am for many years.

Woods, who survived a near-fatal crash in Los Angeles last year, told the Irish Independent, “It’s great to be back. This is a totally relaxed atmosphere. This is all about charity. This is about having fun and doing something for the local communities, and what JP has done over the years has been truly remarkable and we are here to support him.”

McManus’ Pro-Am started at Limerick Golf Club in 1990 and moved to the McManus-owned Adare Manor in 2005 with a total of €140 million raised for charity in five previous tournaments, the last one in 2010. More than €40 million is expected to roll in to the charities from this year’s event.

World number one golfer Scottie Scheffler was joined at the event by the likes of Rory McIlroy, Jordan Spieth, Padraig Harrington, Shane Lowry, and Seamus Power.

Shane Lowry signed the bald head of a fan at the JP McManus Pro-Am 😆 pic.twitter.com/dz6RQVChpl

Cavan’s Leona Maguire was the only lady champion golfer in the tournament. She quipped, “There was none the last time, so every year there is progress.”

The JP McManus Pro-Am tournament is under way in Adare Manor, Co Limerick. 36 teams will go out on the course, with some of the world's top golfers paired up with celebrity amateurs for the competition. pic.twitter.com/nEvSkW2VVB

Horan shared a message online ahead of the tournament. When asked how he felt about teeing up with stars such as Murray and Dornan, the singer, who has played with Murray before, said, “Can’t wait. If the golf isn’t any good, we’ll still have a laugh.”

Fans were awe-struck at such close quarters with the celebs. Two local girls, teenagers Ellen and Niamh Hayes, stopped by after Horan’s tee shot to take a selfie. The exhilarated girls turned to their father and said, “Well, that’s our year made.”

Former Ireland rugby player Keith Wood was overheard saying on Monday, “I hit one into the crowd and they slagged the hell out of me for it.”

Murray made several previous trips to Ireland and advertised its golf courses. He turned Limerick supporter with the county’s green jersey when he attended Sunday’s All-Ireland hurling semifinal against Galway.

Fantastic morning so far! Great to see some familiar faces take to the course ⛳️#JPProAm2022 pic.twitter.com/EFQHYG8gAB