How to make bacon and cabbage, Ireland's favorite dinner

Bacon and cabbage has long been enjoyed by Irish people both in Ireland and abroad - learn how to make it here! 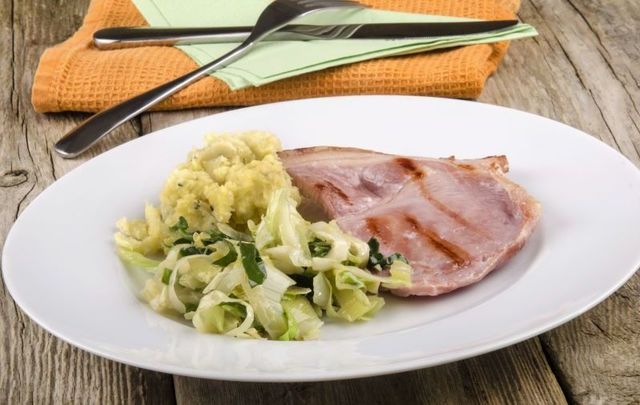 Bacon and cabbage is a taste of home for Irish people all around the globe. Getty Images

Bacon and cabbage is considered one of the most popular traditional Irish dishes - learn how to make it here!

Bacon and cabbage has been found to be Ireland's most popular dinner, according to Ireland's food board Bord Bia.

The wholesome, hearty, and old-fashioned meal is most certainly close to the Irish people’s heart: Bord Bia found that 64 percent of Irish adults consider bacon and cabbage the meal most synonymous with Ireland and that 30 percent of Irish people crave the dish while traveling abroad.

Irish Americans share a similar affinity for the traditional Irish meal. In the US, it’s still very much a tradition to eat corned beef and cabbage, which evolved from the traditional bacon as it was difficult for Irish immigrants to get their hands on the meat at the time.

But in the name of tradition, here's a traditional recipe for Irish bacon and cabbage with mustard sauce:

Place the joint in a large saucepan.

Bring to the boil, then simmer gently for approximately 20 minutes per ½ kg.

Remove the joint from the saucepan.

Remove the rind and score the fat.

Place the joint on a roasting dish.

Spread with mustard and bread crumbs, sugar and a knob of butter.

To make the sauce:

Melt the butter, add the flour and mustard.

Cook for a minute or two.

Whisk in the cooking liquid and cream.

Bring to the boil. Reduce the heat and simmer for 3-4 minutes.

The sauce should have the consistency of thin cream.

To cook the cabbage:

Place the cabbage in a saucepan and barely cover with some of the reserved cooking liquid.

Bring to the boil.

Reduce to a simmer and cook for 2-3 minutes.

Drain well and toss in butter.

Slice the bacon and serve on the bed of cabbage, a little of the mustard sauce, and of course floury potatoes.