Boxty is the perfect solution for leftover mashed potatoes and is sure to put a smile on any Irish person's face! 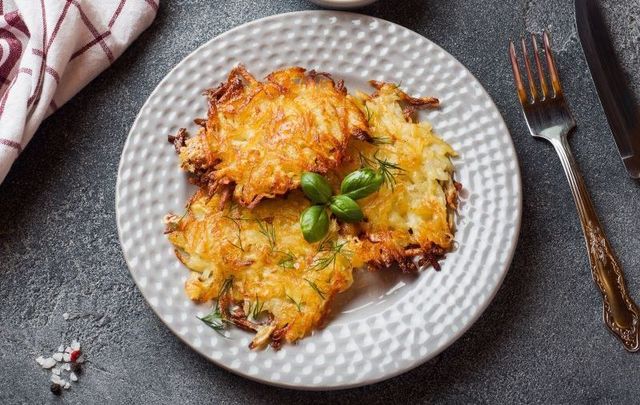 Traditional Irish potato cakes, Boxty - Delicious and simple style of potatoes dates back to the Irish famine and is now having a culinary revival. Gett

Dating back to Ireland's Great Hunger boxty this traditional Irish recipe can be easily jazzed up or enjoyed in the plain old griddled style.

Traditional Irish potato cakes, or boxty, are mostly associated with the north midlands of Ireland in Connacht and Ulster. The people of Mayo, Sligo, Donegal, Fermanagh, Longford, Leitrim, and Cavan are particularly big fans of this delicious and simple style of potatoes.

It is thought that boxty dates back to the days of the Irish Famine, presumably to make the potatoes stretch further. There are a couple of different recipes, but all contain finely grated, raw potatoes served fried.

There are some variations on the classic recipe, such as boiling the patty like a dumpling or baking it like a loaf. With the demands of the modern palate being more diverse, some people add spices or vegetables into the mix. However, the plain old griddled style is the original and is wonderfully tasty.

Over the last couple of years, as the Irish have become more interested in their own cuisine, the popularity of boxty has risen. It's now quite normal to see boxty on a menu in a restaurant in Ireland, whereas a decade ago it would have still been considered a 'peasant dish.' However, boxty has always been popular as part of Irish home cooking.

As one traditional (if woefully out-dated) rhyme explains:

Boxty on the griddle,
Boxty in the pan,
If you can't make boxty,
You'll never get your man.

Place the grated raw potatoes in a clean cloth and twist to remove excess moisture.

Combine the flour mixture with the raw potatoes, the leftover mashed potatoes, and the eggs.

Heat a heavy skillet over medium heat and add butter or oil.

Drop potato batter by the tablespoon into the hot pan.

Brown on both sides (about 4 minutes per side).

Butter each boxty and serve hot with or without sugar.