"They were part of their community and they embraced being part of the weird, diverse, wonderful community." 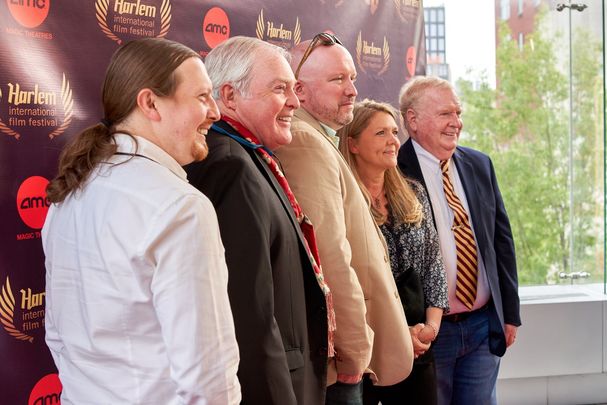 The bar owners and filmmakers behind the new documentary, "Coogan's Way".

The bell finally tolled for Coogan's storied Irish bar and restaurant in Washington Heights in March 2020, but its story and legacy are far from over, as a new film by director Glenn Osten Anderson makes clear.

Saint Patrick's Day 2020 was a haunted affair in New York City and nowhere more so than at Coogan's bar and restaurant in Washington Heights, a venue known far and wide as a kind of City Hall north.

Famous for its hearty multiethnic welcome, which included both the patrons and staff, it represented the very best of what the American dream stands for, a diverse community from various backgrounds working and playing together for the benefit of all.

But then the pandemic finally did what even the exploding New York rents couldn't, making the bars overheads impossible to meet, so with an irony that you couldn't miss this most famous of Irish bars finally closed on the day it should have been celebrating, March 17, 2020.

Now a new documentary film by director Glenn Osten Anderson titled Coogan's Way will tell the story of how the Irish bar and restaurant, which opened in 1985, in a real way tells the wider story of the community it served and the city it reflected.

In the early 2000's Anderson, then a NYU film student first became aware of Coogan's when he was running the video board at the nearby Armory. Coogan's became his after-work place to go get a drink.

“I was studying how to be a documentary filmmaker and that was my place for wrap parties, first dates, or to get dinner when my parents came to town, it really was my favorite spot in New York City. So when I heard about the first impending closing in 2018 I was crestfallen, I just always thought it would be there,” Anderson tells IrishCentral.

Now living in Washington DC where he's a professor at the Catholic University of America, he reached out to co-owner Peter Walsh when he heard the news of its threatened closure and its near-miraculous return.

“I said you probably don't remember me because I was  23 and 24 when I was a regular there, but he did remember me. One of those great skills of the saloonkeeper is that they remember their patrons or at least pretend to. I told him I was now a journalist and a documentarian and a professor. And I asked him if I could come up and make a film about Coogan's.” 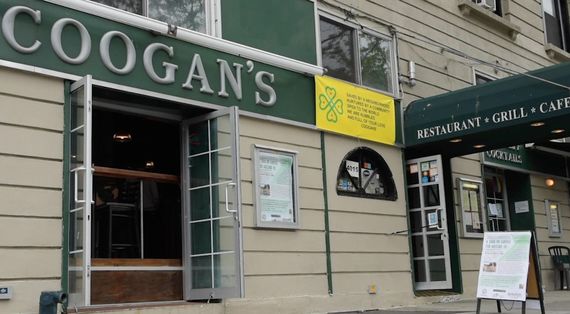 Coogan's was considered City Hall uptown by many.

This was in 2018 after the premises had just been saved from eviction after a stratospheric rent raise attempt. The eleventh-hour rescue looked to Anderson like a feel-good Mom and pop prevails against big real estate story.

“But when you start digging into the story, there was a much bigger story to tell there,” Anderson continues. “I originally intended this as a short film, certainly under 40 minutes. I was aiming for maybe 20 minutes about how this little tiny 3000 square foot restaurant was saved by Lin Manuel Miranda and a New York Times article by Pulitzer Prize-winning author Jim Dwyer.

By the time he had finished the film, it concluded with the owners thanking everyone who had helped to save it, with Walsh adding he didn't realize how much everyone had cared. “It was this really beautiful moment and everything was fine and then Covid 19 came along just as we were wrapping up.”

Anderson had intended to release his film a year earlier than he has but the pandemic drastically changed the overheads of the bar and to make matters worse he knew he couldn't shoot another scene.

“I'm a very severe asthmatic and I couldn't come up to New York and film and put myself at risk covering this latest wrinkle in the story. So instead I had to get really creative. I hired local people who would go in with full-on hazmat suits to fill in the blanks for me, with other contributions via Facebook (the pub has a community group) and FaceTime.”

To direct a documentary remotely was a strange experience he admits. “But that final sequence, I think it's some of the best filmmaking I ever did and I never really touched the camera. It was all due to archive footage and clips that people were giving me and conversations over FaceTime. But it just felt so real and so tangible because it was happening in the moment. That's the kind of thing that filmmakers dream of, that something truly dramatic happens mid filming. And I don't know if it's poetic justice or poetic irony that the last day of Coogan's was St. Patrick's Day.”

What were the chances, I ask? “If I wrote that in a screenplay, people would say I was laying it on a little thick, you know what I mean?” Anderson agrees.
To those who knew it, and all of political and journalistic New York City did, Coogan's was ground zero for campaign launches and power meetings.

But it was also a place to socialize and as the film avers, it was a neutral territory where the power struggles in the neighborhood were successfully thrashed out.

Right there on 169th and Broadway was the American dream. It was what every politician dreams about in terms of the true rich diversity of America.”

When I ask him what the ultimate message of Coogan's Way is for him he replies: “I grew up in a successful small family business, and those are hard on families. It's hard to compete with corporations and everything. And yet this was a successful small business that did it the right way. They were part of their community and they embraced being part of the weird, diverse, wonderful community that is Washington Heights."

“I don't want the film to be a eulogy. I want to remind people that we can do it again. We still can have Irish places like this. Not everything needs to be sanitized and corporatized. There can be great small, independent businesses that are successful and represent their community well. This doesn't have to be the end. In other words, this can still be done.” 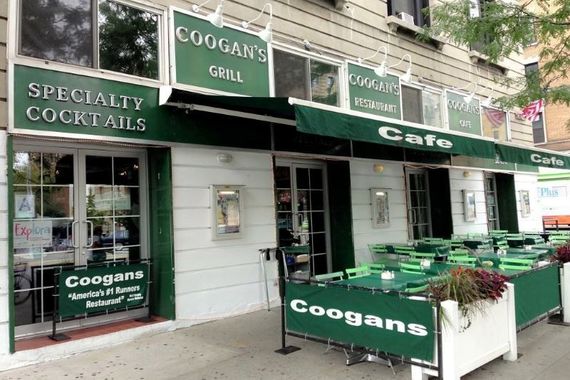 Coogan's is gone but not forgotten in the new documentary Coogan's Way.

Coogan's laid a blueprint for how a business can be a good citizen, Anderson adds. In the 80's it galvanized the local community to push back against the all-powerful drug lords, saving it from a predicted downward spiral. Coogan's was the place where people said, no in fact, we're going to stay and fight. And that message is huge.

Coogan's was the safe zone. Nobody wanted to mess with Coogan's because why would you mess with the best party in town? It was rough in those early days when Peter and Dave were throwing people out of the bathroom for doing drug deals. But soon the rough elements of the neighborhood realized you don't mess with that place. That place is sacred. That place is special.”

The film also includes some commentary from the late Jim Dwyer, whose journalism was a huge part of saving Coogan's. “We anchored the story around Jim knowing the neighborhood and telling us its story. Jim's is the first voice you hear after the cold open. And that was very intentional because Jim represents New York. I've become friendly with his brothers and I've sent them advances of the film. Dedicating Coogan's Way to Jim is the least I could do as a thank you for everything Jim did for New York.”

Coogan's Way recently premiered at the Harlem International Film Festival and will compete in more documentary festivals before its general release later in the summer.