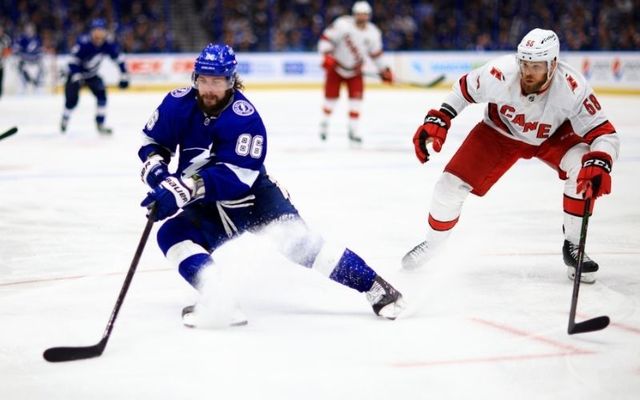 The Carolina Hurricanes take on the Tampa Bay Lightning in the second round of the Stanley Cup play-offs this year. Getty

How many people know that hurling is the game where ice hockey sprang from?

Hundreds of thousands of Irish emigrated to Canada over the past two hundred years and they brought their beloved centuries-old game of hurling with them. The freezing winters made them adapt the game, which became ice hockey

It not surprising really, the Irish created many aspects of American sport and culture, distinctive music and dance, and games.

In a 2017 film, ‘Poc na nGael,’  hurling legend Ger Loughnane took a trip to Canada to explore the hidden link between ice hockey and hurling.

The filmmakers made some fascinating discoveries. “We found out that 250 years ago an Irish principal in a school in Nova Scotia was doing training in games of hurling at the school,”  film director Éamonn Ó Cualáin told the42.ie in 2017.

“His name was William Cochran and he was originally from Omagh in Tyrone. It was the people from Northern Ireland that first brought hurling to Canada.

“Because of the weather conditions out there, that soon changed to ice hurling. The type of hurling stick at the time was a thin, narrow stick rather than the rounded one we have today. It was fairly similar to the hockey sticks of today.

He told “It was narrower at the top as it was more of a ground hurling game we played in Ireland 250 years ago.

Ó Cualáin continues: “The seed of the game came from hurling and ice hurling and then the game just took off. It holds a lot of the same characteristics as hurling. That’s what stood out to Ger – the speed, the passion, the skill.

“After hurling took to the ice and became ice hurling, it took a new life of its own. A new sport. The Canadians are definitely as passionate about ice hockey as we are about hurling.”

The film reveals that “one-third of the Canadian population were  Irish-born or first-generation Irish. Ice hurling became ice hockey, and quickly took hold across Canada.”

“The Toronto Maple Leafs were originally the Toronto St Pat’s. The biggest club in ice hockey came from an Irish team.

“The Montreal Canadiens, which are the second biggest club in Canada were originally called the Montreal Shamrocks. The roots to all these big clubs and what hockey is today came from.”