Coogan's on the Upper West Side of Manhattan issued a "fond farewell" this week when they announced they will not being reopening. 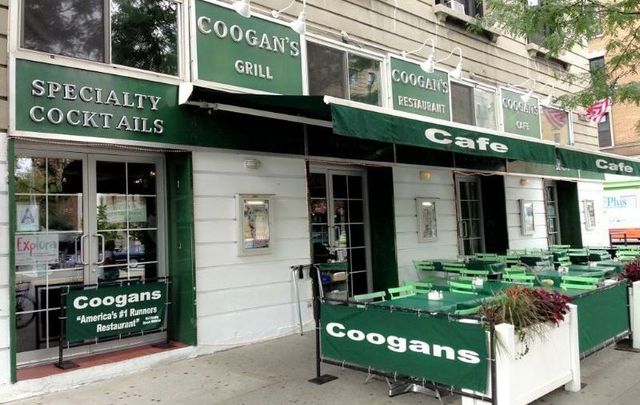 The owners of NYC Irish pub Coogan's announced this week they will not reopen after the coronavirus pandemic passes. Coogan's NYC, Facebook

Coogan's, on the Upper West Side of Manhattan, announced this week that they will be unable to reopen after closing on St. Patrick's Day amidst coronavirus shutdowns.

The economic tsunami caused by Covid-19 has claimed another business in New York City with the permanent closure of Coogan’s bar and restaurant in Washington Heights.

A beloved institution since 1985, located on Broadway and 169th Street by New York-Presbyterian Hospital, the owners of Coogan’s made the sad announcement on Facebook on Monday. The bar closed on March 17, St. Patrick’s Day, usually its busiest day of the year, and plans to eventually reopen when the city returned to some semblance of normal will never come to pass thanks to fixed monthly costs that proved impossible to carry.

“To all our Coogan’s family that extends from a corner in New York’s Washington Heights to so many in near and distant places, we offer love and best wishes that you remain safe, strong and healthy for now and ever,” Coogan’s owners Dave Hunt, Tess O’Connor McDade, and Peter Walsh wrote in a letter dated April 21, 2020.

A fond farewell from Coogan's NYC

“Our first priority will be the security and future of our staff. We encourage our friends to contact us to help this quality group of the best possible people in talent, hard work and integrity to obtain jobs and employment. For over 35 years we have given and received more than is usual in a working experience.”

They added, “What was made at Coogan’s were warm relationships, easy smiles and hearty laughter. If you came in a stranger, you immediately became a friend and left as an ‘old timer.’  We were able to share a full glass of love with a large plate of honesty in a neighborhood full of the most wonderful people you could ever hope to meet.

“To many of us, Coogan’s was a public house, a meeting place, a table to break bread and solve problems. We were a place of celebration and remembrance. We were a bar full of life…a place to listen and a place to talk. We were a place to leave behind the burdens of everyday life and, more often than not, inherit new ones when we volunteered to help a neighbor in need, a kid in search of himself, or a stranger down on his luck.

“We were people of different races, creeds and ideas, all with the same dream to be secure and love. We were a place to find out you weren’t alone but if you wanted to be, your space was sacred. And together at Coogan’s we became stronger and powerful, with an urge to share and offer ourselves with deeds that gave us, in return, the realization of life and the essence of beauty.

They signed their letter "Gracias, sláinte and thank you."

Jim Dwyer of The New York Times reported on Tuesday that New York-Presbyterian, Coogan’s landlords, agreed not to charge rent during the shutdown, but other costs for kitchen equipment rentals and insurance remained in place at more than $20,000 a month, an impossible burden to meet without daily cash flow.

“Coogan’s was the promise of New York incarnate: multiethnic, friendly, welcoming, smart. The premise of the business was the opposite of social distancing,” Dwyer wrote.