In 1999, the Irish American late-night host took his show to Ireland to help re-discover his Irish roots. 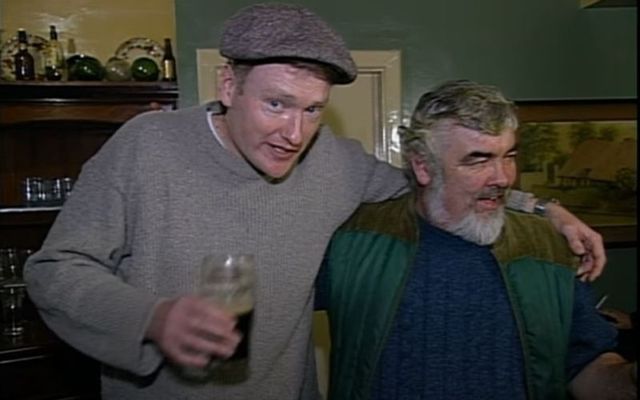 We can only hope that Conan O'Brien is playing a character in this bit!

Conan O’Brien played a clueless yet eager Irish American tourist during his show’s 1999 visit to Ireland.

In a segment that aired on St. Patrick’s Day 1999, Conan O’Brien wandered the Irish countryside in hopes of finding some long-lost relatives and getting back in touch with his roots.

O'Brien, who was raised in Boston, has been pretty vocal about his Irish Catholic upbringing, so here's hoping that his segment in Ireland is mostly in jest.

“It’s very customary for Irish Americans to come back to Ireland to try and find their roots,” says O’Brien opening the segment from Co Limerick.

The funnyman then embarks on a deep dive of all the typical Irish American tourist stereotypes.

(More than 20 years later, it should be noted, the stereotypes has yet to dissipate!)

“I’m gonna go out, and try to connect with my past,” says O’Brien.

The footage then shows O’Brien, beclad in a cabbeen hat, wandering the Irish countryside looking rather lost with a map in his hands.

In fairness to O’Brien and his fair skin and red hair, he doesn’t look too out of place in Ireland.

In a small town, O’Brien then begins to approach Irish passersby for information about his long lost relatives.

“There’s a lot of O’Briens in Ireland,” says one man named Paddy.

“What county?” asks another man, to which O’Brien could only say “it was very green.”

What do you think of Conan O'Brien's visit to Ireland? Let us know in the comments!