Conan O'Brien says that his visit to Chicago's Irish American Heritage Center where he learned to Irish dance is one of his favorite "Conan" moments. 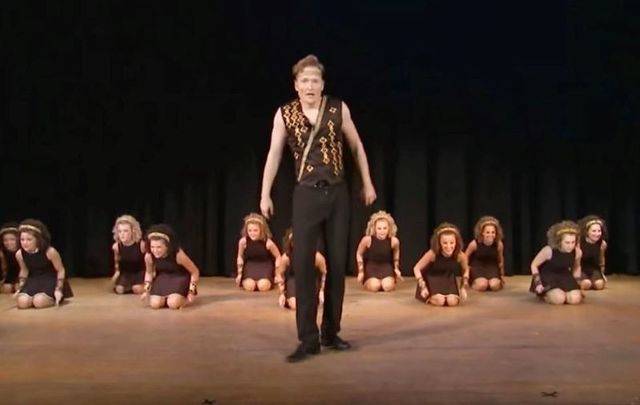 Conan O'Brien got in touch with his Irish roots during a visit to Chicago's Irish American Heritage Center. YouTube/TEAM COCO

O'Brien is saying goodbye to his TBS show "Conan" this month after 10 seasons on TBS and moving to HBO Max, where he will host a weekly variety series.

As he wraps up 1,400 episodes, the comedian and television host has been reminiscing about some of his favorite moments on the show.

Addressing his second live audience in the past 15 months, O'Brien said: "One thing we're doing these last two weeks is taking a look at some of my favorite moments from our time here at TBS.

"Tonight, I'd like to show you a remote segment from 2012 when I visited the Irish American Heritage Center in Chicago - I went to Chicago and learned the sacred Irish art of step dancing."

Back in 2012, O'Brien took a tour of the Irish American Heritage Center in Chicago where he attempted to get in touch with his Irish roots and learn Irish step dancing.

After touring the Heritage Center (which was once a former elementary school but now has a whopping six bars), and examining the Tayto and Irish turf for sale in the gift shop, O’Brien stopped for a dance lesson from the world-renowned Trinity Irish Dancers.

Afterward, O’Brien donned a Michael Flatley-inspired costume and joined the professionals on stage for a performance, where he accidentally kicked a young Irish dancer in the face.

O'Brien's Irish roots run deep. Although he was born and raised in Massachusetts, his family history shows that his ancestors immigrated from Ireland, most likely Co Waterford, in the 1850s.

The funny man enjoys joking about his Irishness. He's previously joked that he resembles Clonycavan Man, a bog body with red hair found in Co Meath in 2003. He shared a photo of the ancient bog body and said “It looks just like me when I forget to moisturize.”

And last year, while appearing on The Late Show with Stephen Colbert, O’Brien said his recent DNA test results surprised his doctor.

“I’ve never, ever, ever had a DNA result like this before,” the doctor told him, according to O’Brien, “and I’ve been doing this for ten years.”

The last episode of "Conan" will air on TBS on June 24.