Fifty Shades of weird for Dakota Johnson and Jamie Dornan

Dakota Johnson opens up about her relationship with Jamie Dornan and their "weird" experience filming the blockbuster "Fifty Shades" trilogy. 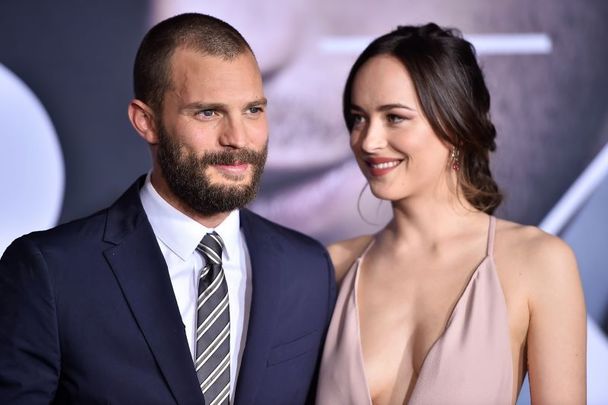 Dakota Johnson is calling BS on the rumors that she and her "Fifty Shades" trilogy co-star Jamie Dornan didn’t see eye to eye on the sets of the hugely successful films, which combined earned more than a billion box office bucks.

In a new Vanity Fair interview, Johnson says she and Dornan banded together on what proved to be a difficult assignment, dispelling rumors that the two stars had some sort of a feud going on.

“There was never a time when we didn’t get along,” she says. “I know it’s weird, but he’s like a brother to me. I love him so, so, so much. And we were really there for each other. We had to really trust each other and protect each other.”

E. L. James, the author of the "Fifty Shades" books, had one vision for the films; the producers had another. And the directors another. It was all a bit of a behind-the-scenes mish-mash, so it was important for Johnson and Dornan to stay united.

“We were doing the weirdest things for years, and we needed to be a team: ‘We’re not doing that,’ or ‘You can’t do that camera angle.’

“But both Jamie and I were treated really well. Erika is a very nice woman, and she was always kind to me and I am grateful she wanted me to be in those movies.”

She added: “Look, it was great for our careers. So amazing. So lucky. But it was weird. So, so weird.”

You can check out Johnson chatting about her and Dornan's time on "Fifty Shades" with Vanity Fair here: