Belfast native Jamie Dornan gave US viewers a demonstration of how he makes his perfect "Tayto smashie" during an appearance on Jimmy Kimmel Live. 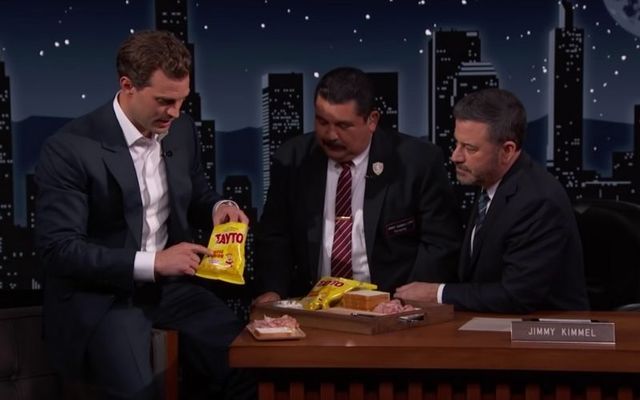 Northern Irish actor Jamie Dornan has divided opinion after he made a Tayto crisp sandwich during an appearance on Jimmy Kimmel Live.

Dornan, who appeared on the show to discuss his role in the newly-released television series "The Tourist", gave US viewers a demonstration of how he makes his perfect "Tayto smashie".

"Ideally you get the cheapest white bread you can find. There used to be a bread back home called Mighty White which is like sugary death," he told Kimmel.

"You go heavy on the mayo both sides. You don’t muck around with light Mayonnaise either, you do the real stuff.

"Regular ham, the cheaper the better. It all comes from the same animal. You go quite heavy on there, five or six slices. Then you get Tayto cheese and onion, they’re a company in the North of Ireland where I’m from, their cheese and onion are the best crisps they do."

Dornan then pressed down on the sandwich, explaining that the resulting crunch is the "most exciting thing that will happen in your day, your year, your life".

The sandwich won Kimmel's seal of approval, with the host describing it as "about six times more delicious than I imagined".

Irish viewers were less impressed, however, with many taking issue with Dornan's use of mayonnaise and the Northern Irish version of Tayto.

"Jamie Dornan putting HAM AND MAYO on a #Tayto sandwich!" One Twitter user said. "NO!!!! Just no.

Another said: "Mayo on a Tayto sandwich? I feel compelled to speak! No mayo, no ketchup.. just white bread and Tayto. That's the tradition."

Another Twitter user said Dornan's Irish passport should be revoked for making the sandwich.

"That Tayto 'smashie' abomination he made on Kimmel is a crime."

Others complained about Dornan describing Tayto as a Northern Irish company.

Tayto was first launched in Ireland by Joe Murphy in 1954, while the Northern Irish company was launched two years later in County Armagh.