Chelsea Clinton spoke in Belfast about her "magical day" filming "Derry Girls" in New York and her fond memories of Ireland. 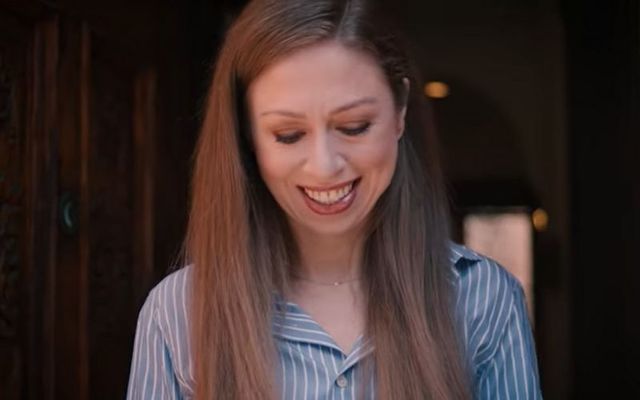 Chelsea Clinton in the finale of "Derry Girls". Channel 4, YouTube

"Derry Girls" wrapped its third and final season in May, and the wildly popular comedy series featured a surprise appearance by none other than Chelsea Clinton.

Clinton is a huge fan of the show and says she loved her time on set.

The former First Daughgter was in Belfast last week to take part in the Our Place in Space festival. She also sat for an interview with one of the co-stars of "Derry Girls", Tara Lynne O’Neill, to discuss the show.

“It was such a magical day when she (writer Lisa McGee) and the crew came and we filmed in New York,” Clinton said.

“It was a bright, beautiful sunny day. I was so proud and excited that I was not only at the end of the series but I was at the last day of filming on the entire show.

“It was just a joy. I had even more fun than I expected to have. I cried when I watched it, even though I knew what was going to happen.”

The final episode of "Derry Girls" centered on the signing of the Good Friday Agreement which Chelsea’s dad, former president Bill Clinton, played such a huge part in creating. In an interview with the Belfast Telegraph, Clinton said that the pact remains important to her family.

“I have these vivid memories of my dad and my mum trying to help and all the hard work that went on. Americans feel great affection for this place and great pride that the country played even a small role in trying to reach the Good Friday Accords,” she said.

“Also, my dad feels keenly that not only should the Good Friday Accords persist in whatever the appropriate configuration is that at least the majority of people can get behind, but also that the lessons from that time are remembered.”

Still no word from Netflix on when season three of "Derry Girls", a production of UK network Channel 4, will air in the US, but no doubt it’ll be soon.

In the meantime, check out the trailer for "Derry Girls" season three here: