Liam Neeson takes on the "Derry Girls" gang and Uncle Colm during his surprise appearance in the debut episode of the hit show's final season. 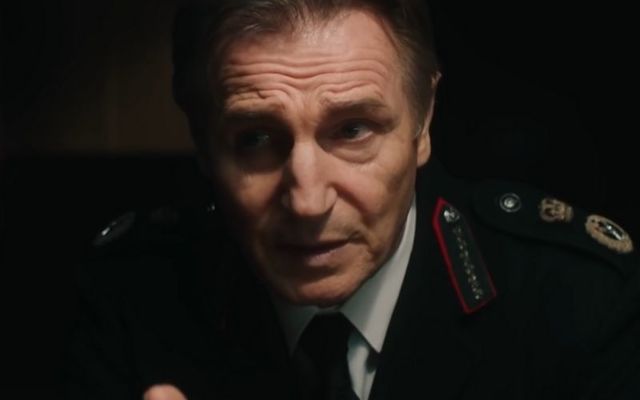 Liam Neeson faces his toughest challenge yet in the debut episode of series three of "Derry Girls." Channel 4, YouTube

We suppose it was only a matter of time before Liam Neeson made a guest appearance on “Derry Girls!”

Neeson - aka ‘The Big Fella’ - showed up on screen in the debut episode of the final series of “Derry Girls,” which aired last night, April 12.

In the surprise appearance, which delighted legions of fans across Twitter, Liam Neeson plays Chief Constable Byers, who is tasked with questioning the gang after they were caught on school grounds that evening.

In typical fashion, Erin, Clare, Orla, Michelle, and the wee English fella James panic as they’re seated across from the steely-faced police officer.

However, when asked if they have an adult that can come down to the station, Erin comes up with a brilliant solution.

“What if we wear them down first,” she posits with a mischievous grin. “I know who we should call.”

The scene then cuts to the endlessly-dull Uncle Colm speaking with Chief Constable Byers, who can hardly keep his eyes open in the face of pure boredom.

Elsewhere in the hilarious scene, Neeson reveals Sister Michael's full name to be "Sister George Michael," and manages to work in a shout-out to his hometown of Ballymena in Co Antrim.

After the widely well-received episode aired on Tuesday night, the show’s creator Lisa McGee took to Twitter revealing the code-name used for Neeson, a nod to his turn in the 1996 film “Michael Collins.”

Thanks for watching lads! Our code name for Liam during the shoot was ‘ the big fella’ arguably quite an easily cracked code. What an honour to have him in our wee show. Our very own Northern Star

Needless to say, Irish Twitter was greatly excited about not only the long-awaited return of "Derry Girls," but Neeson's surprise appearance.

This Twitter user succinctly summed up the reaction to Neeson showing up onscreen:

Jesus, Mary and Joseph and the wee donkey: Liam Neeson stole the show with his #DerryGirls cameo. @LisaMMcGee also gave him the best line. How many Catholic officers are in the RUC, Erin asked him. “Well, if you count the Jewish fella from Ballymena, 3.” #ThereIsNoTape pic.twitter.com/f2ykH3tW3E

Of course, the "Taken" puns were aplenty:

This person on Twitter rightly pointed out that audiences were "spoiled" with the Liam Neeson - Uncle Colm matchup:

Another person pointed out how the Liam Neeson cameo will go down as one of Derry's best-kept secrets:

Keeping Liam Neeson's guest appearance under wraps for this must have been the best kept secret in Derry...#DerryGirls

Even Domino's Pizza waded into the convo:

And perhaps the highest of compliments was paid to "Derry Girls" by this Twitter user who asserts that it's better than "Father Ted."

OK. Hear me out. Derry Girls is better than Father Ted. Fight me.