A new episode of The Simpsons included a subtle nod to Derry Girls, giving the smash hit sitcom set in Derry the ultimate pop culture reference. 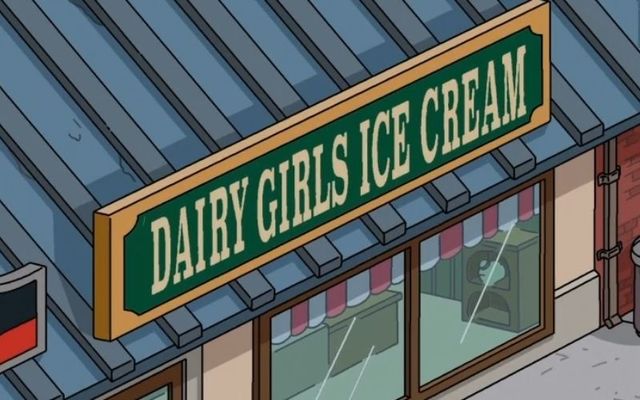 Lisa McGee, the creator of Derry Girls, shared this screengrab of "Dairy Girls Ice Cream" from The Simpsons on Twitter. FOX

The Simpsons made an exciting nod to Derry Girls in the recently-aired episode entitled "You Won't Believe What This Episode Is About – Act Three Will Shock You!"

In the March 13 episode, Homer Simpson takes his dog Santa's Little Helper to an ice cream parlor named none other than "Dairy Girls Ice Cream."

A screengrab of the episode quickly caught the attention of Lisa McGee, the creator of the hit show Derry Girls.

Matt Selman, the Executive Producer for The Simpsons, soon after confirmed that "Dairy Girls" was indeed a nod to Derry Girls.

Of course, McGee was shocked at Selman's confirmation, saying simply "I. Am. Dead."

It's the least we could do!

Marie-Louise Muir from the Talking Derry Girls podcast told BBC Radio Foyle that a reference in The Simpsons was "almost like a papal blessing".

"The Simpsons, in terms of popular culture, is up there, to have Derry Girls referenced in the Simpsons is huge," Muir told BBC Radio Foyle.

Derry Girls has proved a major hit since its debut in 2018, drawing a consolidated audience of 3.2 million viewers for the second season premiere. The season two premiere also proved to be Channel 4's most popular comedy launch in 15 years.

However, a release date for season three of Derry Girls has yet to be confirmed.

This is not the first time that The Simpsons have made a reference to Derry. In the 2009 St. Patrick's Day special, the famous family traveled to Ireland aboard a "Derry Air" aircraft.

The famous sitcom is the longest-running comedy in US history and is renowned for its frequent pop culture references.