"Derry Girls" ended with a 45-minute special on May 18, concluding with a poignant five-minute montage about the historic Good Friday Agreement in 1998. 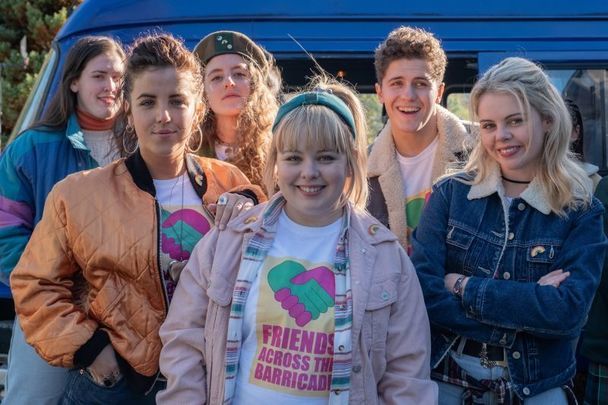 British fans of "Derry Girls" took to Twitter to claim that Wednesday night's series finale taught them more about the Good Friday Agreement than the UK education system did.

The hugely popular sitcom ended with a 45-minute special on Wednesday, concluding with a poignant five-minute montage about the historic Good Friday Agreement in 1998.

Signed on April 10, 1998, the agreement effectively brought the Troubles to an end in Northern Ireland and set the region on the way to power-sharing between nationalist and unionist parties.

The historic agreement, which prevents the installation of a hard border on the island of Ireland, has come under threat since Britain voted to leave the European Union in 2016.

"Derry Girls" viewers took to Twitter following Wednesday's extended finale to praise the series for covering the issue so thoroughly.

"I learned more about the Good Friday agreement in the five-minute closing Derry Girls montage than I learned in the entirety of my education in the UK, and that is literally not an exaggeration in the least," Manchester artist Dan Hett wrote on Twitter.

I learned more about the Good Friday agreement in the five minute closing #DerryGirls montage than I learned in the entirety of my education in the UK, and that is literally not an exaggeration in the least

"Derry Girls has educated me about the Good Friday Agreement better than my (British) school did," wrote another Twitter user.

"As a child of the 90s, #DerryGirls gave me more insight into the politics of Northern Ireland and the Good Friday Agreement than school ever did. And has motivated me to go away, learn more and understand better. All while making me laugh and cry. Incredible program," said another Derry Girls fan.

Irish viewers also took to Twitter to praise the show for covering the issue of the Good Friday Agreement so thoroughly.

"Sometimes there are no words that can adequately capture the emotion and significance of something as horrific as Bloody Sunday or important as the Good Friday Agreement," Irish woman Sarah Doran wrote:

I'm just here tweeting about a TV show. I grew up in the Republic of Ireland and never really understood the full extent of what was going on as a child of the 90s, but we all knew the whole thing was beyond complicated and the GFA was really important. That ending made me bawl.

"So many people have tried to educate British people on the importance of The Good Friday Agreement and hopefully Derry Girls has succeeded," wrote the Dublin-based Twisted Doodles account.

"Lessons from #DerryGirls tonight. Protect Channel 4 from the Tories. Explain the Good Friday Agreement to the Tories," Declan Cashin remarked on the social media platform.

Protect Channel 4 from the Tories.

Explain the Good Friday Agreement to the Tories.