We have really no idea why but Jan 12 is categorized as the Feast of Fabulous Wild Men Day and we are all in! Who doesn't love a wild Irish fella! 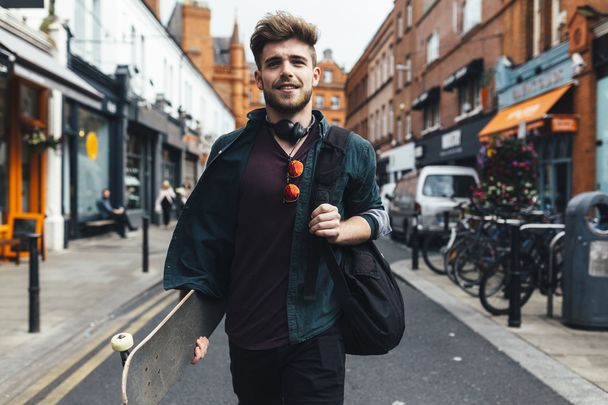 A look at American women's fascination with Irish men for "Feast of the Fabulous Wild Men Day!" Getty

Great sense of humor, an edge of wildness, that red beard! Americans just love Irish men. This Feast of Fabulous Wild Men Day we give a little appreciation for our Irish chaps and find out why exactly they're so very much in demand in the US!

*Editor's Note: In 2011, IrishCentral talked to men, women, and some experts, including the Millionaire Matchmaker Patti Stanger, about the everlasting appeal of the rogue Irish man.

When Patti Stanger was 19 she fell in love with an Irish bartender.

“The accent totally got me, he looked like Gabriel Byrne and I remember he was the best kisser,” the U.S. dating expert told the Irish Voice newspaper, IrishCentral's sister publication based in New York City.

Stanger, a third-generation matchmaker, CEO, and star of the hit Bravo TV show Millionaire Matchmaker, says she can easily see why Irish men prove so popular in a U.S. context.

“They are rugged, tall, sexy and they take charge. You feel like a woman next to them,” she says.

“I would rather have an Irishman than a pretty Wall Street feminine man who makes a lot of money,” she revealed.

The former director of marketing for Great Expectations, the oldest dating service in the U.S., Stanger recalls even in high school in New Jersey that she liked the Irish guys the most. She describes the Kennedy brothers as the “epitome of an Irish American who we all drooled over.”

In one of the world’s largest melting pots such as New York, an Irishman’s brogue will provide endless opportunities with the ladies.

Stanger, who has made her fortune through matchmaking for the wealthy, says her advice for an Irish man wooing that special woman is to “put the whiskey down and don’t drink the whole bottle.”

“I always wanted to attend and see that,” she said.

The Dubliner, who met his American girlfriend while working as bartender, says Irish heritage is a big windfall on the dating scene.

“We are new, unknown territory with a good reputation for boozing and banter,” he summed up.

“We are also polar opposites of American men, so in a way we are a niche market.”

Since trading his life behind the taps for a career in finance, Power reflects that most Irish men are equally in awe of American women.

Monaghan man, Brian O’Reilly works as a bartender in Eamonn Doran's bar in Brooklyn and admits he has been known to use his Irish charisma to win over the ladies.

“It helps quite a bit to be honest. They ask, ‘Where are you from,’ and when I say ‘Ireland’ it’s an ice breaker right away,” he told the Irish Voice.

“Basically the big difference is the same type of woman at home wouldn't look at you. Being Irish you have an advantage.” O’Reilly, who grew up with five sisters, says from an early age he was taught how to treat his female companions.

“You learn to be polite to women and how to treat them they way you want your sisters to be treated,” he said before admitting that “Mammy is number one!”

As he prepared for a date that night with his latest U.S. love interest, O’Reilly reflected that the dating scene in New York is completely different to back home.

“At the beginning it would be hard to get used to the fact that dating was not ‘going out’ with anybody, but I adjusted really fast,” he laughs.

After living in New York for over five years the Monaghan man says he approaches dates with American women in a different way.

“American women don’t drink as much as Irish women so I would take them to the park or a movie or to see sites,” he says.

After spending a semester studying in Ireland, Megan Lynch from Geneva in upstate New York has come to some conclusions concerning Irish men.

“Irish guys are much more forward, they are confident in a less arrogant way,” she told the Irish Voice.

“When they approach you it’s in a fun, friendly way and you feel comfortable right away, but here in the U.S. guys can be more arrogant about it,” she added.

Aesthetically she says American men win over, but it’s the Irish charm that really catches the attention.

“Good looking American men are easy to come by, but once you find a good looking Irish man their personality makes them even more attractive, once you are around them and see their true potential,” she maintains.

With leading Irish actors such as Gabriel Byrne, Liam Neeson, and Colin Farrell now household names in the U.S., dating coach David Wygant, says that Hollywood has done a lot to enhance the appeal of modern Irish men.

Wygant says Gerard Butler’s portrayal of an Irish man in the film PS I Love You is just one depiction of a romantic Irish man which would make most American women swoon.

“Hollywood is making the Irish man the new flavor of the month,” Wygant, who is based in Los Angeles, told the Irish Voice.

“Irish guys are more charming because of their voice.

“You can take the same sentence spoken by an Irish man and an American man, but women will swoon over the accent,” he said.

Describing Dublin as “one of the most beautiful cities in the world,” the dating expert said he was pleasantly surprised by how Irish men reacted to women in bars.

“The men weren’t staring at women like they hadn’t seen meat in 14 years,’ he recalls. “American guys can be very lecherous.”

Dating an Irishman for the past year, Steph King from Virginia says in her experience the drinking stereotype concerning the Irish is accurate.

“Yes, the cliché is actually true. They also drink during the day, more than any American men I’ve dated or known,” says the digital marketer, who is not turned off by her boyfriend’s drinking habits.

“I’ve noticed that sure Irish men drink often, but they aren’t half as loud as a group of American men can be,” she added.

One drawback she says is their obsession with the American brand Abercrombie and Fitch, something the Virginian adds most U.S. guys grow out of in their teenage years.

“Unfortunately Irishmen wear a lot of Abercrombie. American teenage boys wear Abercrombie, but men do not, so that was something I noticed was very popular with an older age set of Irish guys.

“It would be odd to see an American guy over the age of 20 wearing Abercrombie,” she added.

Despite the occasional drunken slur and odd fashion faux pas, it seems the appeal of the rogue Irish man in the U.S. is popular as ever.

“I would say over the past couple of years we have seen more of a demand for Irish men,” she told the Irish Voice.

Winner of Best of Long Island Matchmaker and Dating Service for the third year running and with over 1,000 clients on her books, Nelson admits she can see why her female clients are so attracted to Irishmen and suggests a good upbringing has a lot to do with it.

“One of the great advantages and why they make such great husbands is that they are brought up to be great sons,” she says, adding the accent is “the icing on the cake."

Are you an American who only has eyes for the Irish when it comes to romance? Tell us why in the comments!