Why Irish bars in New York City are something special

Old or new, every Irish bar in New York City has its own story, its own identity. 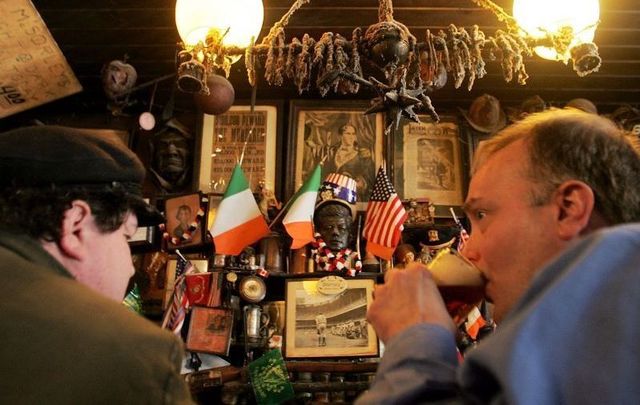 Old or new, every New York City Irish bar has an identity

Irish bars can be found on nearly every avenue, cross-street, and corner in bustling New York City.

Spanning all the way down to Brooklyn, out to Queens, and even all the way to the top of the Bronx, New York City's bars come in all shapes and sizes ranging from small haunts that are perfect for a quiet pint, to posh establishments, all the way up to the big dance clubs where you can really let your hair down for the night.

The city has a long and colorful history with immigrants directly from Ireland, as well as the many following generations who, albeit sometimes tenuously, claim some fraction of Irish heritage. It’s no surprise then that the Irish - known the world over for their funloving spirit - have left a big mark on the New York City bar scene.

Ahead of St. Patrick’s Day in 2018, Steven H. Jaffe, PhD, a curator at the Museum of the City of New York spoke with Edible Manhattan about the unique identity of New York City’s Irish bars.

Reflecting on the influx of Irish immigrants into New York City during Ireland’s Great Hunger, Dr. Jaffe says: “The neighborhood ‘saloon’ really became a community center for these folks.”

“It was where you could unwind over whiskey or beer after a hard day’s work as a cart driver, longshoreman, factory hand or laundress. But it was also where you could learn the latest news from the old country, find a job and make other social connections that could help you survive.”

“As a result, saloon keepers became important figures in Irish neighborhoods like Five Points, Hell’s Kitchen, and across the river in Brooklyn.”

Dr. Jaffe explains how political careers were often born in many Irish bars in the city: “Running a bar often was the first step in a political career. Tammany Hall, the Democratic Party machine in New York, promoted saloon keepers to important positions and ran them for political office. In fact, by the early 1900s, Tammany was being run by a saloon keeper, ‘Silent Charlie’ Murphy, one of the most powerful politicians in America.”

That sense of community in Irish bars remains today. Speaking with amny in 2019, Mike O'Sullivan, who co-owns both Grace’s and Hartley’s in NYC with fellow Irishman Dan Grace, said they tried to keep something in mind when opening their bars: “We have a saying in Ireland, 'From docker to doctor': you leave your job at the door and you're the same as the next person. It's the culture of community."

One of New York City’s most popular bars today is downtown Manhattan’s The Dead Rabbit, whose name is a nod to the Irish American gang from the mid-19th century around the same time as Ireland’s Great Hunger.

“Our narrative is to bring the Irish pub into the 21st century. Like Irish whiskey, the Irish pub has been pigeonholed as an inferior product,” owner Jack McGarry told Edible Manhattan.

“We pay homage to Irish history, but we’re not living in the past, nor are we afraid to evolve."

While some Irish bars carefully craft their “narrative,” others are just aiming for a bit of craic. Looking for a wild night out? Follow the J1’ers to The Mean Fiddler, New York City’s answer to Dublin’s Copper Face Jacks.

If you're feeling particularly adventurous, grab a cab or hop a train up to Woodlawn in the Bronx where Katonah Avenue and McLean Avenue have a thriving nightlife and no shortage of Irish pubs.

Other Irish bars, however, find a happy medium between old and new. Paddy Reilly’s on 2nd Avenue typically hosts a full roster of pure traditional Irish music but also has open-mic nights and Bluegrass nights. Celebrities are no strangers in this small bar either; Jimmy Fallon and Post Malone had a late-night singsong there in 2018.

Whether opening a week ago - and there never seems to be a shortage of new Irish bars in the city - or opening more than a century ago, like McSorley's, every Irish bar in New York City has its own identity, its own story.

What's your favorite Irish bar in New York City? Let us know in the comments!