Kaitlin O'Brien's touching story about Matty Maher, the late Irish owner of McSorley's in NYC, has gone viral as part of the Humans of New York project. 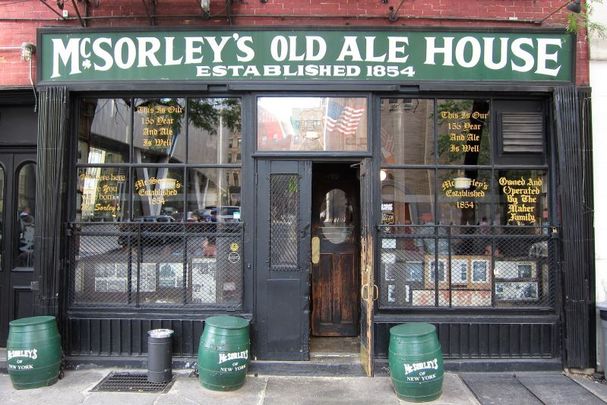 HONY shared O’Brien’s amazing story on its social media accounts on July 7. In her positively feel-good story, O’Brien says that for her sixth birthday, her father promised her “anything you want.”

When she requested a visit to New York City, and her father obliged.

Her special birthday trip to the Big Apple featured a visit to the American Girl Store and lunch at Balthazar, but O’Brien’s father made a special stop at the historic McSorley’s Ale House.

“He’s not a creepy alcoholic father or anything,” O’Brien told HONY of her father, “He designs bars for a living, and he’s always looking for inspiration.”

The father and daughter ventured downtown to pay the Irish pub a visit in the early afternoon.

O’Brien says: “My dad ordered a beer, and an old man came and sat down at our table. He looked very Irish: suspenders, loose pants, red face. And he was very, very kind.

“He showed us a few card tricks. He loved that my last name was O’Brien. He kept calling me a ‘real life Irish princess.’”

“At the end of our visit we took a photo together. And as he was leaving, he told me: ‘I’m Matty Maher. The owner of this bar. And I’ll be expecting to see you again on your 21st birthday.’”

“My dad said we could do something special for my 6th birthday. ‘Anything you want,’ he told me. I think he thought I...

Matty Maher, a native of Co Kilkenny, passed away in New York in 2020 at the age of 80. He had owned McSorley's, which is considered New York City's longest continually operated Irish pub, for nearly five decades. His story is that of the American Dream mixed with, of course, a bit of Irish luck.

In 1964, Harry Kirwan, the then-owner of McSorley’s, was visiting Ireland when his car broke down. 25-year-old Maher came to his assistance on the roadside, and Kirwan told Maher to call in if he was ever in New York City and promised the young Irish man a job.

Maher took Kirwan up on his offer and immigrated to New York City. There, he began as a waiter and bartender at McSorley’s, slowly climbing the ranks before eventually buying the business from Kirwan’s son Danny in 1977.

O’Brien told Humans of New York that her father mailed Maher their photo as soon as they returned home. She says she and her dad visited McSorley’s a few more times over the years whenever they happened to be in New York.

“I’d always send Matty a postcard in advance, to let him know we were coming,” O’Brien said. “But after a while, I wasn’t a little kid anymore. The bouncer got less and less excited about letting me inside, so we stopped going.”

O’Brien didn’t see Maher for several years, but when her 21st birthday came around, her father took her on one last trip to New York City.

“I sent Matty a postcard to let him know we were coming, but I wasn’t sure he’d remember me,” O’Brien admits.

She and her father headed to McSorley’s, but Maher was nowhere to be seen and O’Brien, coming down with strep throat, was ready to leave.

“But it was just like a movie. The doors swung open, and Matty came in like a ray of sunshine. He brought a plate of cupcakes over to our table.

"He showed me a framed photograph of the two of us—it had been hanging in his office all these years.

“And then he gave me a birthday card. Inside he had written: ‘I’ve finally met a woman who keeps her word.’”

On the Humans of New York Facebook page, O’Brien’s sentimental story about Matty Maher has drawn more than 320k likes in the first few hours of being posted. Amongst the thousands of comments are plenty of kind words about the beloved Irish bartender, and many promising to raise a toast to O'Brien and Maher.