WATCH: Colin Farrell and Brendan Gleeson reveal what it's like to drink fake Guinness

Colin Farrell and Brendan Gleeson said that before Guinness 0, which they used on set for "The Banshees of Inisherin," they had to drink "ghastly" pints of fake Guinness while filming. 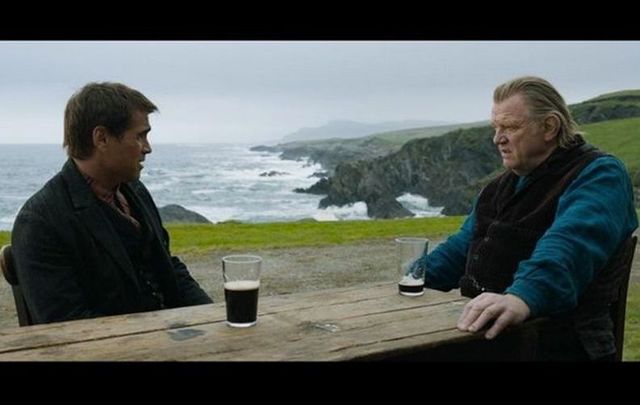 Colin Farrell and Brendan Gleeson, stars of Martin McDonagh's upcoming film "The Banshees of Inisherin," revealed the struggles of having to drink fake Guinness while filming.

Farrell and Gleeson revealed on a recent episode of "Late Night with Seth Meyers" that before a non-alcoholic version of Guinness was created, they would have to drink a fake concoction made up of "all sorts of unspeakables" to recreate the look of the iconic stout onscreen.

"Everything was ghastly," said Gleeson, 67. "It was actual cream…"

Farrell, 46, added, "Grape juice with cream! All sorts of drink you shouldn't be mixing," and noted that the cream itself was often "curdled" too.

"Flat Coke and stuff like that with all sorts of unspeakables on top of it," said Gleeson.

"It was okay, but if you had a lot of takes, and you had to drink in it, it was just… I mean, Il faut souffrir, they say. It's important to suffer… for art. And this was suffering."

When it came to shooting "The Banshees of Inisherin," the two Dublin actors said they were thankful they could now drink the nonalcoholic Guinness 0 on set.

"On the production, we would've had to drink just an unutterable amount of [bleep]. And it's not [bleep]. It's actually really tasty, the Guinness 0.

"It's a bit sweet for his tongue," Farrell said, referring to Gleeson's palate, "because he likes the proper stuff."

"I've given it to a few other people who are, you know, stout aficionados who are like, 'Jesus, that's an eight.' So, I loved it."

Farrell, who has been sober for more than a decade, went on to say that thanks to nonalcoholic Guinness, he was able to join his mates in the pub for a few pints for the first time in years. "It was fantastic," he remarked.

"The Banshees of Inisherin" brings the Farrell and Gleeson together on screen for the first time in 14 years since they co-starred in McDonagh’s 2008 comedy "In Bruges." The new Irish film will open in cinemas on Friday, October 21.