WATCH: Brendan Gleeson's gnarly SNL promo has us hyped for his hosting gig

Brendan Gleeson reveals that he's really a skater in the bizarre and hilarious SNL promo ahead of his hosting gig this Saturday, October 8. 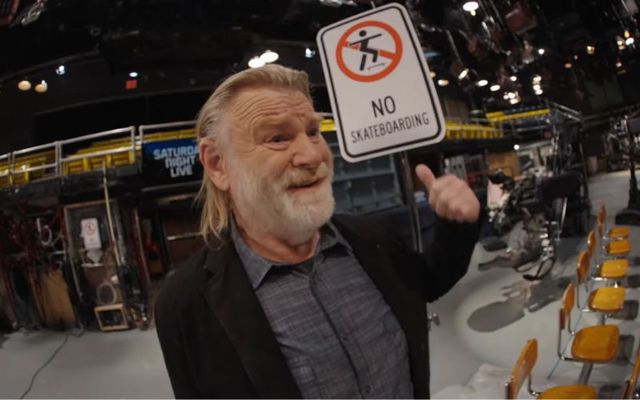 “Watch SNL this Saturday, motherf---ers,” Brendan Gleeson demands in his brief yet highly entertaining promo ahead of his Saturday Night Live hosting gig this Saturday, October 8.

“I’m Brendan Gleeson,” the legendary Irish actor says at the opening of the SNL promo that's going viral. “Most people know me as an actor, but the real me is a skater.”

The 67-year-old Dublin native shreds and kick-flips his way through the famous Studio 8H, at least until a security guard catches up with him.

“Up yours, copper,” Gleeson tells the guard, before adding: "'Thrasher Mag' can kiss my a--."

“I’m so sick of these posers!” Gleeson says in the bizarre but hilarious spot:

The SNL promo's unexpected angle is winning praise, likely because it's so enjoyable to see Gleeson, noted for his more dramatic roles, leaning into his comedic side.

"Best promo in a long time," one person wrote on Twitter.

"Can you just do an hour or whatever of Gleeson boarding," another person wrote.

Gleeson is taking over SNL hosting duties as part of the promotional push for his new Irish movie "The Banshees of Inisherin" which arrives in theaters on October 21.

A stunned Padraic, aided by his sister Siobhan (Kerry Condon) and troubled young islander Dominic (Barry Keoghan), endeavors to repair the relationship, refusing to take no for an answer. But Padraic's repeated efforts only strengthen his former friend’s resolve and when Colm delivers a desperate ultimatum, events swiftly escalate, with shocking consequences.

Gleeson might have gotten some SNL pointers from his co-star Farrell, who hosted the long-running show way back in 2003 when he starred in "Gladiator."

Gleeson will be the first Irish person to take on SNL hosting duties since Saoirse Ronan graced the stage back in 2017. (Though, in fairness, she's actually Irish American!) Other previous Irish hosts include Liam Neeson and Gabriel Byrne.

With proud Irish man Gleeson as this week's guest host, the SNL writers are likely already firing up their always, eh, shrewd takes on Irish culture, as this round-up of SNL's St. Patrick's Day sketches illustrates: