Barry Keoghan has confirmed that he has wrapped filming "The Banshees of Inisherin," also starring Colin Farrell and Brendan Gleeson! 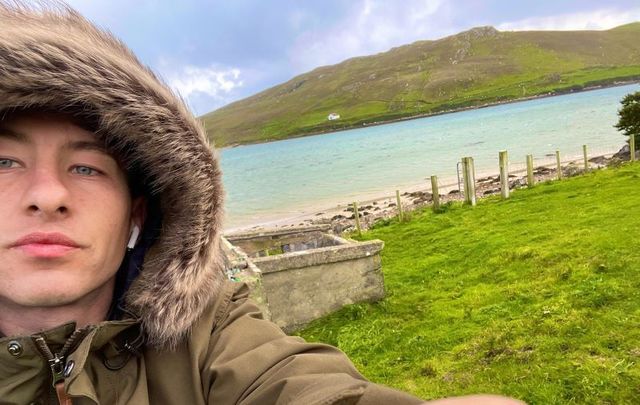 Barry Keoghan shared this selfie on Twitter on October 23 confirming that "Banshees of Inisherin" has wrapped filming. @BarryKeoghan, Twitter

Barry Keoghan’s long-wished-for role in a Marvel film finally arrives in theaters on November 5 when "Eternals" opens, but the Dubliner hasn’t been at some of the splashy global premieres that have taken place alongside his co-stars including Angelina Jolie, Salma Hayek, and Kit Harrington.

And we may know why – on Saturday, October 23, he posted a selfie of himself on his Twitter account, taken in Co. Mayo and captioned, “THE BANSHEES OF INISHERIN (sic) Wrapped.”

"Banshees" is the upcoming Martin McDonagh film that stars Keoghan, Colin Farrell, and Brendan Gleeson. It had been shooting for several weeks in Achill Island off the coast of Co Mayo, and apparently, it’s now in the can for McDonagh to work his magic on.

The full-court press for "Eternals" will undoubtedly continue till it’s released to the public, so it’s likely we’ll see Barry join the promo trail to plug his role as Druig. The critic from the Los Angeles Times called his performance “terrifically dry” – there are a good few reviews out there, and they seem to be mixed, but Eternals will likely do just fine at the box office where it counts.

ETERNALS
This is DRUIG
🐺☘️🐺
This is a moment! Gratitude and Proud

Meanwhile, back on the "Banshees" front, Farrell charmed the locals in Mayo, happily posing for selfies and behaving like a totally normal Irish person which includes doing his own grocery shopping.

One shopper met Colin holding a basket full of goodies like sliced pan and he stood for a photo, with many of his fellow Irish citizens lauding him on Twitter for his culinary choices which included yummy Bird’s Eye potato waffles.

I am not sure why this brings me so much joy, but Colin Farrell buying Birds Eye Potato Waffles on Achill just makes me so happy pic.twitter.com/CTaZkWSMU3