Colin Farrell admitted that it was his fault that he was kicked by one of his "tricky" co-stars while filming "The Banshees of Inisherin" in Ireland. 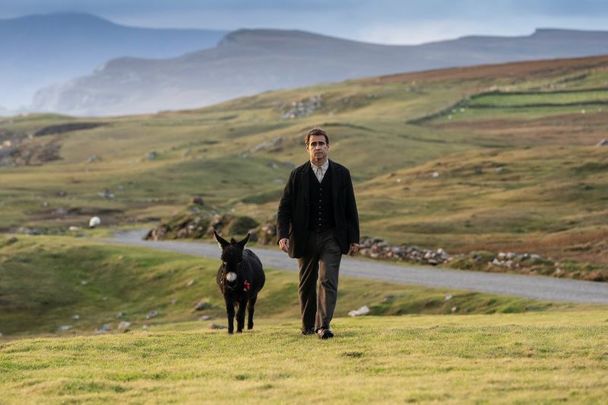 Colin Farrell reveals he was both kicked by a donkey and bitten by a dog while filming "The Banshees of Inisherin."

Farrell joined his "Banshees" co-star Brendan Gleeson and director Martin McDonagh for an interview with Empire ahead of the highly-anticipated Irish film's theatrical debut.

Farrell plays Pádraic, who keeps a donkey as a pet, in the new movie that's set in 1920s Ireland.

“Ah, Jenny was tricky,” Farrell said of his donkey co-star in the recent interview with Empire.

“It was her first film, but she acted like it was her 100th. She was kind of over it. Kind of jaded,” he joked.

“She didn’t like her nose being touched, I found out. She kicked me in the knee. But that was my fault. I got too close to her.”

"The Banshees of Inisherin," set on a remote island off the west coast of Ireland, follows lifelong friends Padraic (Farrell) and Colm (Gleeson), who find themselves at an impasse when Colm unexpectedly puts an end to their friendship.

A stunned Padraic, aided by his sister Siobhan (Kerry Condon) and troubled young islander Dominic (Barry Keoghan), endeavors to repair the relationship, refusing to take no for an answer.

But Padraic's repeated efforts only strengthen his former friend’s resolve and when Colm delivers a desperate ultimatum, events swiftly escalate, with shocking consequences.

In "Banshees," Farrell reunites with his "In Bruges" co-star and fellow Dublin native Brendan Gleeson as well as director and screenwriter Martin McDonagh.

The Irish movie, which is getting serious Oscar buzz, already has two awards to its name - it won the Best Screenplay and Best Actor (Farrell) awards at the Venice International Film Festival.

"The Banshees Of Inisherin" will arrive in theaters on October 21.