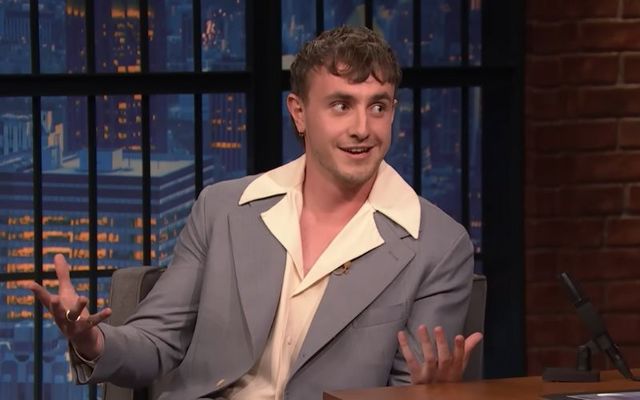 Paul Mescal, who rocketed to fame after starring in the Irish series “Normal People,” stopped by "Late Night with Seth Meyers" last week to do some promo for his buzzy new film “Aftersun.”

"I guess this isn’t technically rugby?" Meyers asked Mescal on the late-night talk show while holding up a picture of Mescal in some serious Gaelic football action.

“This is Gaelic? Gaelic football? How would you describe it for us who maybe are not up on the latest?” Meyers asked.

“You represent your parish or where you come from. It’s non-professional so it’s very much spirited, I would say.”

Intrigued, Meyers asked: "So it's not that there's a different rule? It's just that people are maybe more prone to fight?"

Mescal chuckled: “It depends on which town you’re playing against.”

Mescal said he played for Maynooth as well as his county Kildare.

When asked if he was prone to injury, Mescal said: “I broke my nose and my jaw. I broke my jaw two days before starting my final year in drama school.

“So I was like, I’m going to probably give it a break for the last year.

"I found out that they don’t really go hand in hand, you can’t really act with a broken jaw.”

Mescal admits he didn’t disclose his injuries occurred on the pitch, instead telling his acting teachers that he “got mugged at work.”

You can watch Paul Mescal on Late Night with Seth Meyers here:

Mescal, who played GAA with Kildare minors and under-21s, had a promising Gaelic football career before turning his focus fully to acting.

"Who can say anything for certain but my personal belief is that Paul would have went on to have a very long and impressive career," former Kildare manager Cian O’Neill told the Irish Times in 2020.

Despite no longer playing, Mescal's passion for GAA remains. In 2020, he sported a pair of O'Neill's Kildare GAA shorts in a spread for GQ.

Great to see our 'Vintage Shorts' feature in @GQMagazine. An ideal stocking filler this Christmas⬇️ https://t.co/1GwwdVyhFL