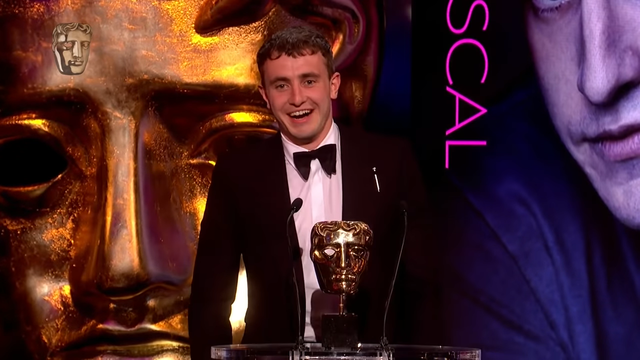 The Irish actor dedicated his award to his co-star Daisy Edgar-Jones, who was nominated in the Leading Actress category, but lost out to Michaela Coel who starred in I May Destroy You.

Mescal, a native of Co Kildare, skyrocketed to fame upon last year's debut of the BBC Three / Hulu mini-series Normal People, which was adapted from Irish author Sally Rooney's award-winning novel of the same name.

The show smashed streaming records for BBC Three and became the most-watched opening of a drama series on Ireland's RTÉ Player. While the show enjoyed great commercial success, it was also critically well-received and garnered three Primetime Emmy nominations in 2020 and two Golden Globe nominations this year.

"It's a role that has totally changed my life," Mescal said after his win on Sunday.

Asked about the appeal of Normal People, Mescal said: "It's quite a simple premise. It trusts an audience to engage and be challenged by it. It's a show that focuses on the normal human society and treats their joys and traumas and tribulations with utter respect.

"It's seeing two people who viewers feel they can relate to, seeing how they navigate life."

Mescal also told reporters on Sunday he "would love to do a Normal People season 2.

"I would work with Daisy [Edgar-Jones] again in a heartbeat and regardless of working with her again, I'm just really excited to see her so we can see each other again. It would be great.

However, the Kildare native did tease: "I think there's going to be hopefully an announcement, I imagine, in the next week or two. I'm going away for work. I'm really excited about it. It's a film and I really like the script.

"I've already probably said too much but I'm excited about it."