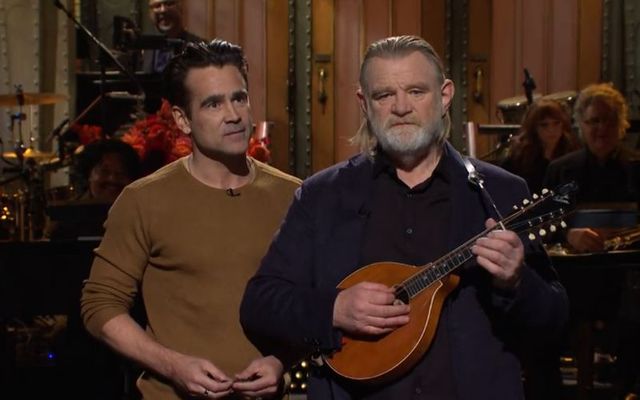 Brendan Gleeson was joined by his "Banshees of Inisherin" co-star Colin Farrell during his first-ever appearance as Saturday Night Live host on Saturday night.

Gleeson then listed some of the films that audience members might recognize him from, including "Braveheart", "Harry Potter", and Joel Cohn's "Macbeth".

Boasting slick-back hair, the Irish actor admitted that he wasn't "really used to telling jokes" and asked for a mandolin to be brought out on stage.

He revealed that the mandolin once belonged to Barney McKenna, a member of the legendary Irish band the Dubliners, and began to tune the instrument while telling stories about his family's musicality.

His aunt Nell, for example, had a voice so high-pitched that she could shatter glass, which he said usually frightened the children of the family, especially those wearing glasses.

Farrell emerged on stage boasting a ludicrous fake mustache after Gleeson had jokingly introduced him as being a "little too needy".

Farrell proceeded to ask Gleeson who was "his most favorite co-star" he'd ever worked with, to which Gleeson replied "Paddington Bear".