Ireland has been named the Best European Destination for Groups

Ireland has been named the Best European Destination for Groups at this year's Group Travel Awards. 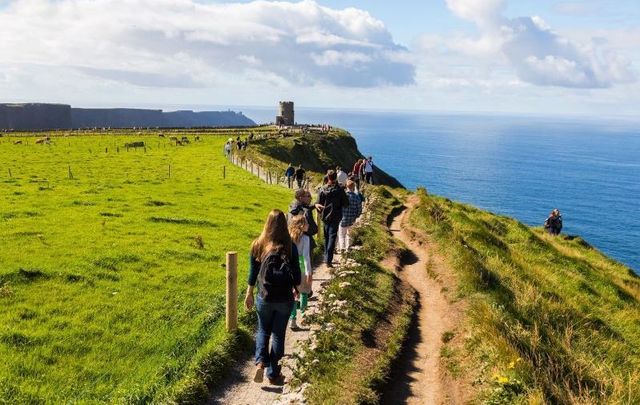 Ireland has been named the Best European Destination at this year's Group Travel Awards. Getty Images

Dublin’s Guinness Storehouse was also named among the best destinations

Ireland has been named the Best European Destination for Groups at this year’s Group Travel Awards.

Read More: Five things to do in the West of Ireland when the sun is shining

The 2019 Group Travel Awards saw Ireland as a whole, as well as Dublin’s Guinness Storehouse, take home awards that were voted upon by readers of GTO Magazine and Group Travel Grapevine.

Ireland was named as the Best European Destination for Groups, with Germany being named as the runner-up. Belgium, Brussels, Cyprus, Prague, and Switzerland were also nominated in the category that Ireland has won for three consecutive years.

While Disneyland Paris took home the award for the Best European Attraction for Groups, Dublin’s own Guinness Storehouse was named the runner up. The Cologne Cathedral in Germany, the Keukenhof Gardens in the Netherlands, The Notre Dame Cathedral in France, and the Titanic Belfast in Northern Ireland were also nominated.

The Guinness Storehouse in Dublin

Read More: Aer Lingus celebrates its newest direct route to the US this week

Tourism Ireland said: “The island of Ireland is a premier destination for coach and group holidays and this year your clients are sure to be inspired by the unique and iconic experiences on offer along the Wild Atlantic Way, throughout Ireland’s Ancient East, in and around Dublin and across Northern Ireland.”

Juno Thompson from Tourism Ireland said: “We are delighted to have been voted Best European Destination for Groups for a third consecutive year in the highly prestigious 2019 Group Travel Awards. We would like to take this opportunity to thank all the group travel trade who voted for us. We appreciate your continued engagement and support keeping the island of Ireland in the forefront of traveler’s minds.”

Julie Wakley, Tourism Ireland’s Head of Great Britain, said: “We are delighted that Ireland has been voted Best European Destination once again at the Group Travel Awards and we would like to take this opportunity to thank all the group travel organizers who voted for us. Travelers nowadays have tremendous choice, which makes it more important than ever for us to ensure the island of Ireland stands out from other destinations.”

Did you know that IrishCentral has a sister travel company called Irish Studio Travel who can help you vacation in Ireland, no matter your budget? With Irish Studio Travel, you can now book your entire vacation with us, which means we do all the hard work.

Where is your favorite place to travel to Ireland? Let us know in the comments!