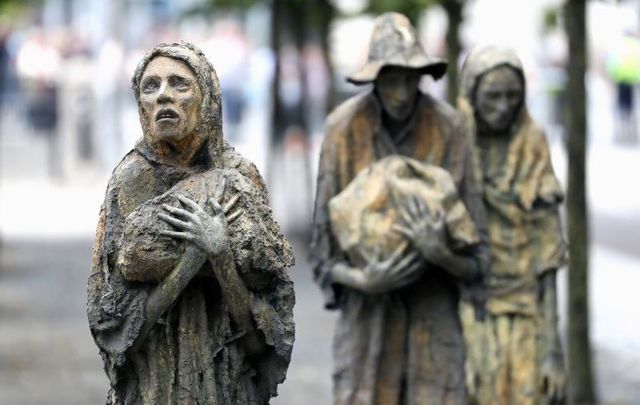 Ireland is known for its rich historical past.

No stranger to conquests, hunger, and tyranny, here are the top ten eras when living on the Emerald Isle was treacherous.

The Vikings arrived in Ireland in June 795 AD from Denmark and Norway and attacked their first Irish monastery in Rathlin Island near Co. Antrim. For decades following they continued to attack monasteries and slay anyone that got in their way.

The Black Death first arrived in Ireland visa ships landing on the east coast in July 1348. Today we know it as the bubonic plague and it was spread by fleas on rats.  Before long, the epidemic was raging in Dublin, Drogheda, and Dundalk. By fall, the plague had spread inland in Co. Meath. In Waterford Franciscan Friar John Clyn kept a chronicle of the deaths and recorded that by Christmas, 14,000 had perished in Dublin alone.

For many centuries Munster was dominated by two families, the Butlers of Ormonde and the Fitzgeralds of Desmond. The two clans were continuously at the battle, and during the height of their dispute, their strategy of scorched earth warfare is believed to have killed up to 30,000 people in the region.

After the war between the two families had ended the effects of the scorched earth warfare continued to have a drastic impact. The combining effects of the warfare and the plague caused the Irish population to decrease from 2.1 million to 1.7 million.

A severe weather front hit Ireland in one of the coldest winters in Irish history in 1740. The great frost wiped out an estimated 400,000 as temperatures plummeted and the cold intensified. The cold weather led to food riots, famine and epidemic, and death.

Excessive rain and cold temperatures ruined both the grain and potato crops in 1817 which left the poor hungry and cold. A lack of hygiene and little to no ventilation meant that typhus spread like wildfire throughout the country. Some 65,000 people are thought to have died as a result.

The first of several cholera outbreaks began in Dublin in the spring of 1832. The city was overcrowded with slums, and so became the perfect breeding ground for the disease.  Temporary hospitals were set up across the city as the disease struck people down in a matter of hours.

When potato blight struck Ireland in 1845, millions of people who were completely dependent on potatoes were left starving. The population of the country was depleted as one million people died, while one million emigrated to the U.S. and other countries.  A significant proportion also died from typhus and cholera on coffin ships as they attempted to flee the Famine.

During April and May of 1941, Belfast was the target of German air raids which killed almost 1,000 people. On April 14, Belfast suffered the greatest loss of life in a single raid on a U.K. city outside of London, and 100,000 people of a 425,000 people were left homeless.