Ireland has a long history of horrific disasters. 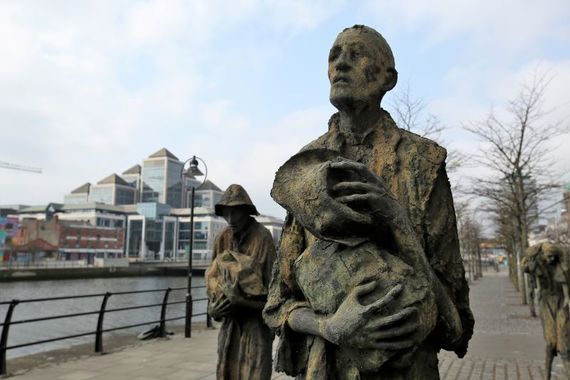 WHILE about 2,500 Irish are projected to die as a result of the Covid-19 pandemic, the numbers are minuscule compared to other natural and man-made disasters in Irish history.

In 2016 journalist Eoghan Corry wrote Top Ten of Ireland, 250 Lists from the Emerald Isle, an excellent book dealing with Ireland’s 10 worst disasters as well as other notable top 10 lists.

What strikes the reader immediately is the huge numbers and sheer horror of the disasters.

The Black Death, for instance, lasted from 1348 to 1349.  It came aboard ships from Europe landing on Ireland’s East Coast. They were rat-infested and the rats had fleas which led to rampant disease.

Today we know of it as the bubonic plague and it killed 14,000 in Dublin alone, a huge number for the times.  It is estimated that 40 percent of those living in towns and cities died from it as it thrived on tightly packed, unsanitary urban areas.

In 1740 a severe winter like none ever experienced in Irish history hit.  The Great Frost wiped out an estimated 400,000 as temperatures plummeted and the cold intensified. The cold weather led to food riots, famine, epidemics, and death.

As a local historian put it, “The Great Frost struck between December 1739 and September 1741, after a decade of relatively mild winters. Its cause remains unknown.  During the ramp-up to the crisis in January 1740, the winds and terrible cold intensified, yet barely any snow fell.

“Ireland was locked into a stable and vast high-pressure system which affected most of Europe, from Scandinavia and Russia to northern Italy, in a broadly similar way. Rivers, lakes and waterfalls froze and fish died in these first weeks of the Great Frost.

"Up to 38 percent of the people are said to have perished and it kicked off the first great migration to America.”

In 1817-1819 famine and typhus hit Ireland.  Before the Great Famine, there were many smaller incidences of famine and disease. One of the worst of them was in 1817 when hunger and typhus struck.

Excessive rain and cold temperatures ruined both the grain and potato crops in 1817 which left the poor hungry and cold. A lack of hygiene and little to no ventilation meant that typhus spread like wildfire throughout the country. Some 65,000 people are thought to have died as a result.

In 1832 a huge cholera outbreak began.  The first of several devastating outbreaks began in Dublin in the spring of 1832.  The city was overcrowded with slums and so became the perfect breeding ground for the disease.  Temporary hospitals were set up across the city as the disease struck people down in a matter of hours.  The town of Sligo was especially devastated.

No one had seen what was later described as Asiatic cholera before, and none suspected it was in the very water they were drinking. Tens of thousands died all around Ireland before it abated.

From 1845-1849, of course, came the Great Hunger, the biggest tragedy of all. When potato blight struck Ireland in 1845, millions of people who were completely dependent on potatoes were left starving.

The population of the country was depleted as one million people died, while one million immigrated to the U.S. and other countries.  A significant proportion also died from typhus and cholera on coffin ships as they attempted to flee the Famine.

Finally in, 1918 there was the influenza pandemic.

As frightening and deadly as Covid-19 is, Ireland has clearly survived worse.