The "Book of Common Prayer" was discovered in a Church of Ireland rectory in Monkstown after being stolen from Marsh's Library in 1840. 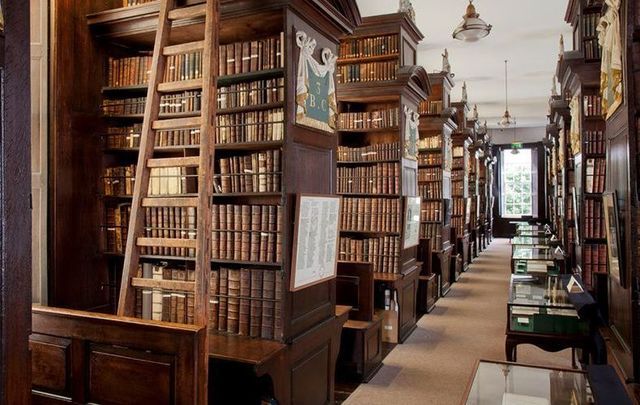 The interior of Marsh's Library, the oldest library on Ireland. Tourism Ireland

A prayer book missing from Ireland’s oldest library has been returned to the reading room after almost two whole centuries. Marsh’s Library in Dublin greatly suffered with theft throughout the 18th and 19th centuries but books such as this one have been discovered over the years and returned.

The “Book of Common Prayer,” first printed in 1666, was discovered in a Church of Ireland Rectory in Monkstown after the church’s reverend checked through a series of old books there and discovered the Marsh Library stamp in its cover.

The religious book had first gone missing from the Marsh Library in 1840 but has now been returned after 177 years.

Reverend Roy Byrne had visited an ongoing exhibition in the library about the various books that have been stolen and returned to them. He was looking through the various books when he recalled seeing an old collection of books in the rectory in Monkstown when he moved in and began to wonder if there could be a similar culprit among them.

“He [Rev Byrne] was in looking at the exhibition and it sort of sparked a memory that when he moved into the rectory there was a whole series of books and he went back and checked. One of them had the Marsh’s Library stamp on it,” Jason McElligott, the library’s keeper, told the Irish Times.

“They turn up in the weirdest of places," Mr McElligott added.

“The books are lying in attics or have been passed down through families.

“About four years ago somebody came in with a book wrapped up in The Irish Times and he said ‘I think this belongs to you’ and it did.

“He had found it in a junk shop in Harold’s Cross and it was a medical book from 1538 that had been stolen sometime in the nineteenth century. The books are out there, it’s interesting to see where they turn up.”

The library introduced cages at one point in its history, such were the difficulties they had in dealing with book theft but the robbery still continued as the readers simply hid the books about their person. It is believed that around 1,200 books were stolen throughout the 18th and 19th centuries.

The doors in the aisles of Marsh's Library. Image: Tourism Ireland.

“They brought in cages that they used to lock readers into but the theft still continued with people putting the books into their bags or up their coats,” said McElligott.

“The book that was returned is unusual because most of the books that were stolen weren’t religious or theological books. They were literature, books about Irish history or ones with maps. Anything to do with travel just walked off the shelves.”

While still holding a hefty sum for a book, the recently returned “Book of Common Prayer” is priced at just €1,000 ($1,100), small change compared to the large figures placed on the purchase of other stolen books that are still at large. Half a million is the price placed on “The Sceptical Chymist” (1661) by Robert Boyle, that was stolen from the library in 1767.

The oldest library in Ireland and one of the only 18th-century buildings in Dublin still being used for its original purpose, Marsh’s library was founded in the early eighteenth century by Archbishop Narcissus Marsh. In fact, many of the collections in the Library are still kept on the shelves allocated to them by Marsh and by Elias Bouhéreau, the first librarian.

Now 300 years old, the beautiful interior of the Library and its dark oak bookcases remain largely unchanged and it the owner of many rare collections. Open to the public, Marsh’s Library is home to more than 25,000 rare and fascinating books.

Have you ever visited Marsh's Library? Let us know what you thought of the collection.