From supersized hymn books to an early version of the Táin: Trinity College Dublin public lecture series and digitization project 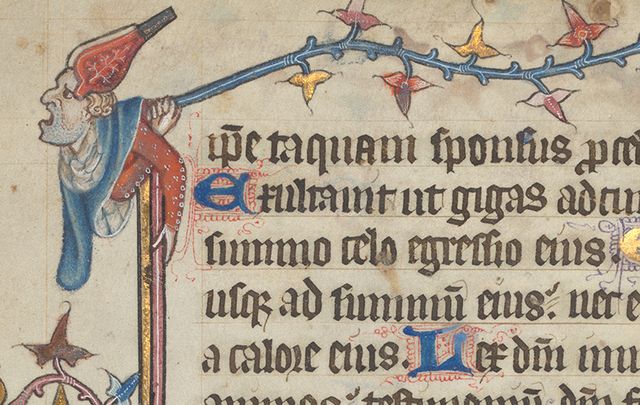 A man with a pair of bellows on his head and several reptilian beasts adorn the frame of Psalms 18 and 19 in this fourteenth-century Psalter. Trinity College

From supersized hymn books to an early version of the Táin: Trinity College Dublin public lecture series and digitization project

Manuscripts teeming with grotesque beasts, heretical English translations of the bible and the precious book that introduced St Patrick to the world are among medieval manuscripts to be introduced to a global audience next month as part of a lecture series and accompanying digitization project at Trinity College Dublin.

To over 600,000 visitors a year Trinity is synonymous with the Book of Kells. But that ninth-century manuscript is only part of the story.

The Library at Trinity College is home to six hundred medieval manuscripts ranging in date from the fifth century to the sixteenth. This comprehensive collection offers a rare window into the mysterious world of medieval thought.

Starting from October 2017 Irish and international experts will introduce the public to eight of these rarely-seen medieval texts through a free monthly public lecture series entitled “Beyond the Book of Kells” commencing on Tuesday, October 3rd in Trinity Long Room Hub Arts and Humanities Research Institute. In addition, the eight manuscripts are being digitized in full to coincide with the series and will be published online before each lecture to allow the public to examine them in advance.

Posted by IrishCentral.com on Tuesday, 26 September 2017

The “Beyond the Book of Kells” monthly lecture series will commence on October 3 with a lecture by Dr Laura Cleaver, Ussher lecturer in Medieval Art, on TCD MS. 92: An Illuminated Psalter and Hours – a lavishly illustrated manuscript that offers a window into complex religiosity of the late medieval English aristocracy. All lectures in the series will be available via podcast after the event.

The full digital copy of the “Illuminated Psalter and Hours”, the manuscript to be featured in the first lecture, has been posted up already and can be viewed via tcd.ie.

Other manuscripts included in the “Beyond the Book of Kells” project include a half meter tall 15th century choir book which, before the invention of the printing press, allowed members of the choir to sing from the same hymn sheet.  Other manuscripts include the Book of Armagh – the medieval text that tells us most of what we know about St Patrick – and the Book of Leinster which contains the largest collection of Irish myth and history from before the 12th century including one of three surviving copies of the Táin.

There’s the historical manuscript made for a late medieval Anglo-Irish family with its margin notes about the treachery of their colonial subjects and the late medieval translations of the Bible into English, controversial if not illegal at the time, which predate Vatican II’s rejection of Latin in the 1960s by almost 600 years. Also included is the copy of the sprawling Middle English poem Piers Ploughman with a biographical note at the end, without which its author William Langland would be little more than a name. 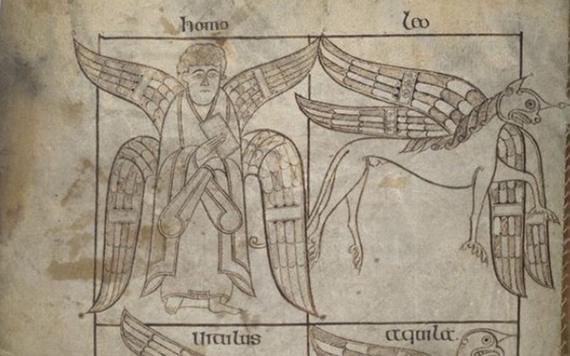 A man and a lion, representing Matthew and Mark, prefacing the Gospels in the ninth-century Book of Armagh. This is the earliest copy of the New Testament to survive from Ireland.

Dr Mark Faulkner, Usher Assistant Professor, School of English, Trinity, commented: “Trinity’s extraordinary collection of medieval manuscripts survive mostly thanks to James Ussher, a Dublin native and scholar who rose to become primate of Ireland as archbishop of Armagh. Unlike other manuscript collectors who often bought everything they could lay their hands on, Ussher worked more like a stamp collector, eager to have one of every type. As a consequence, Trinity’s collection of manuscripts is unusually coherent, embodying in microcosm the entire breadth of medieval thought.”

Helen Shenton, Librarian and College Archivist, Trinity, added: “We’re committed to widening knowledge of, and virtual access to, this great collection of medieval manuscripts which Trinity College Dublin stewards on behalf of the nation. Each volume is written by hand and is uniquely illustrated. Each newly digitised volume reveals hidden layers of history, politics, art history, philosophy, morality, religion which both illuminate our past and have unexpected resonance for today.” 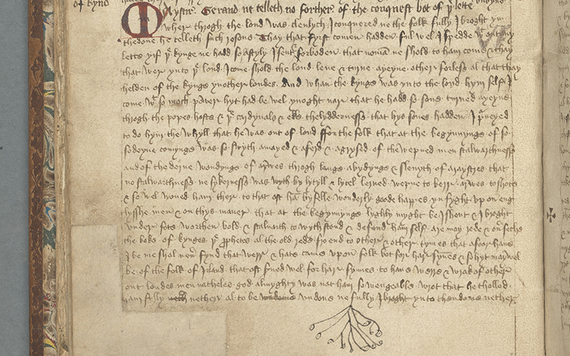 'Be aware that Irish men are naturally dishonest’ an annotator warns subsequent readers in the margin of this historical manuscript produced for an Anglo-Irish family in the late Middle Ages.

Manuscripts featured in the project include:

The Book of Leinster

This manuscript contains the largest collections of Irish myth and history from before the twelfth century, including one of three surviving copies of the Táin and the earliest personal letter in Irish. It is an unparalleled witness to Irish learning before the arrival of the English.

The Book of Armagh

As probably Trinity’s most important manuscript after the Book of Kells, the ninth century Book of Armagh contains not only the earliest text of the New Testament from Ireland, but also a suite of works without which Ireland’s patron saint, Patrick, would be almost unknown.

Almost half a meter tall, this manuscript is a fine example of a late medieval choir book, one of the few to survive from Ireland. Beside music for services for saints Patrick, Canice and Bridget, it records the commemorations of numerous other all but forgotten Irish saints, including Magnan of Kilmainham. 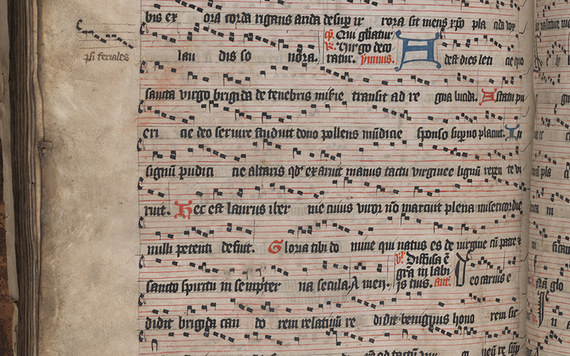 Music for the feast of St Bridget on 1 February from an enormous choir book, probably used in Kilkenny Cathedral in the fifteenth century.

Teeming with dragons, monkeys and grotesque beasts this lavish manuscript offers a window into complex religiosity of the late medieval English aristocracy.

This manuscript, which introduces the fundamental tenets of the Christian faith and text of the psalms in English, represents an early attempt to democratize access to scripture, at a time when there was the danger such activity would be condemned as heretical.

Gerald of Wales was perhaps the principal propagandist of the twelfth-century English invasion of Ireland. This 15thcentury translation, apparently written for an Anglo-Irish audience, comes complete with marginal notes offering warnings against Irish treachery.

Perhaps the greatest medieval English poem, William Langland’s Piers Plowman is an astonishingly rich and searching exploration of what it takes to live rightly in a society corrupt and corrupting. This manuscript is especially significant for containing early biographical information about the poet himself. 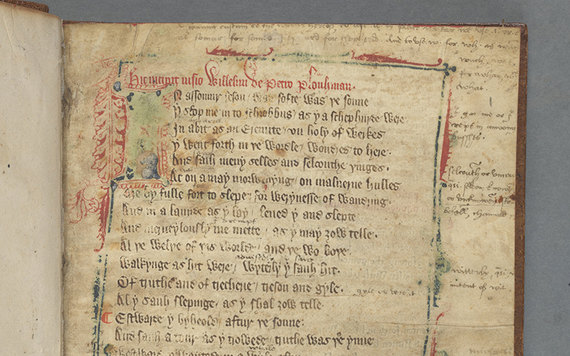 ‘Here begins the dream of William [Langland] about Piers Ploughman’. So starts one of the great medieval English poems, a sprawling account of a dream the poet had while napping on the Malvern Hills in Worcestershire.

A 12th-century Bede from Bury

Bede’s eighth-century Ecclesiastical History of the English People and an eleventh-century treatise on the resting places of English saints – was typical of the type of works which English monasteries filled their libraries with after the Norman Conquest being central to the Norman invaders’ interactions with the religious history of their new territory, providing nothing less than a holy geography of England.

The lecture series is led by Dr Faulkner from the School of English and is part of the Manuscript, Print, and Book Cultures research theme, in association with the Trinity Long Room Hub Arts and Humanities Research Institute, the Faculty of Arts, Humanities, and Social Sciences, and the Library of Trinity College Dublin.