On This Day: John McCormack, tenor and papal count, was born in Athlone

John McCormack was born on June 14, 1884. The Irish tenor is considered one of the world's first radio megastars. 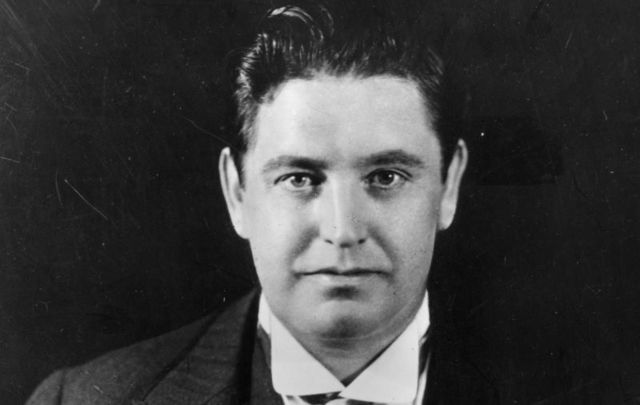 Born in Westmeath in 1884, John McCormack shattered box office records in the US and was said to be "the best-paid concert singer in history.”

The year was 1906. The setting was a stage in Savona, Italy, a northwestern port town south of Milan. The opera to be performed that particular evening was L’Amico Fritz by Pietro Mascagni, with a fresh-faced 21-year-old named Giovanni Foli included among the cast members.

Though he had only a supporting role, Foli earned quite a bit of attention for his performance. This should not be surprising. After all, this performer would go on to conquer the world, becoming one of the most popular singers of the first half of the 20th century.

He shattered box office records during his many trips to the U.S., where he became one of radio’s first mega-stars, and was, according to one account, “the best-paid concert singer in history.”

If you can’t recall any popular singers named Giovanni Foli, that’s because it was a decidedly operatic stage name for the acclaimed Irish tenor John McCormack (1884 – 1945).

“Almost everybody who owned a talking machine in the days of World War I was sure to have, along with Caruso’s Pagliacci, John McCormack’s ‘Mother Machree,’” Time noted after McCormack died at the age of 61.  “He sang up & down the land, and was always good for a benefit — for the Irish, the Red Cross, the Catholics, the U.S. (he sold a half-million dollars worth of Liberty Bonds).”

To some, McCormack is simply Ireland’s greatest musical artist. Others have compared his massive U.S. popularity in the 1920s to that of Elvis Presley in the 1950s.  McCormack also paved the way for later crooning stars such as Bing Crosby and Frank Sinatra.

But while audiences and critics remain fascinated with Elvis, Sinatra, and Crosby, McCormack’s light has dimmed somewhat.  In terms of sheer talent and popularity, however, McCormack should always be remembered — especially by the Irish in America.

In 1929 McCormack had one of his most important concerts, this one in Dublin.  That year the Irish were celebrating the 100th anniversary of Catholic emancipation. The world, of course, would soon be sinking into the Great Depression. Ireland itself was only a few years removed from a grueling Civil War.

But McCormack was able to transcend these divisions, blending art, faith, and history through his powerful music, which one critic has said: “speaks from the heart, to the heart.”

So who, exactly, was John McCormack? How did a fellow dub Giovanni Foli become the first in a long line of popular Irish tenors? And what role did he play in cultivating Irish American pride? 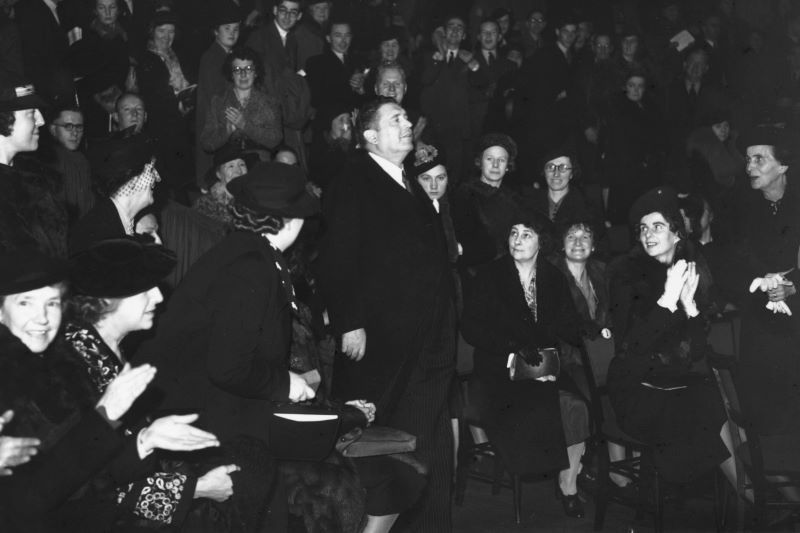 John McCormack at the Royal Albert Hall in 1939 (Getty Images)

McCormack was born on June 14, 1884, the fourth of 11 children, and baptized at St. Mary’s Church in Athlone, County Westmeath. McCormack’s parents worked in nearby mills, but despite this working-class upbringing, young John was able to cultivate his impressive singing talents.

Though countries such as Italy are better known for producing opera singers, Ireland’s musical tradition served McCormack well. John sang in the church choir as did his father Andrew. He went to the 1903 Feis Ceoil (the Irish National Music Festival) in Dublin and emerged as a gold medal winner.

McCormack first gained U.S. attention while performing at the Irish Village section of the 1904 World Exposition in St. Louis. His engagement was short-lived as he objected to the “stage-Irish” aspect of the show. He quit, but not before he met the love of his life, Lily Foley, also a member of the troupe, whom he would marry two years later. It was a performance by another towering artist the following year that left a lasting impression upon McCormack. At London’s Covent Garden, McCormack watched Enrico Caruso in La Boheme. “The best lesson I ever received,” McCormack later said.

McCormack now knew what he wanted to do, and also knew he had the raw talent.  So, he traveled to Italy, where the acclaimed Vincenzo Sabatini was charged with honing the Irishman’s technical singing skills. McCormack then made his famous debut in Savano, before, in the fall of 1907, he made his London debut. McCormack was just 23 years old, making him the youngest principal tenor ever to sing at Covent Garden, according to the John McCormack Society, founded in 1960 to preserve the Irish tenor’s great achievements.

A Hit Around The World

McCormack quickly showed he had the stuff to be an international star, selling out shows in Ireland, England, the U.S., and Australia. This wide appeal can be explained, in part, by the fact that McCormack blended high artistic music and more popular, accessible singing.

In fact, McCormack biographer Gordon Ledbetter believes the tenor was the last singer to successfully bring together such divergent styles. Attempting to convey McCormack’s widespread fan base to contemporary audiences, another biographer said John McCormack was Pavarotti, Madonna, and Johnny Carson all rolled up into one.

Though he was a hit around the world, Irish songs were always a favorite of McCormack’s. Given the events of the day as well as his Irish background, it makes sense that McCormack’s was the first well-received version of “It’s a Long Way to Tipperary,” recorded after World War I broke out in 1914.

McCormack also recorded nationalist songs, such as “The Wearing of the Green,” which did cost him some British fans. But the singer’s devotion to his adopted country (he became a U.S. citizen) could never be questioned. McCormack donated thousands of dollars to the U.S. effort during World War I, after America entered the war in 1917. This begins to illustrate why McCormack may have been so popular among Irish-Americans.

“Growing up, almost every Irish household in New York would have a John McCormack record,” a distant McCormack relative (found driving a taxi cab in New York City) told one documentary filmmaker.

But McCormack was not merely a great singer who happened to have been born in Ireland. The era in which McCormack performed was also important for the Irish. After all, many Irish nationalists on both sides of the Atlantic were skeptical about or openly opposed to U.S. involvement in World War I. This rekindled the old charge that Irish Catholics could never become truly American. U.S. President Woodrow Wilson was among those who suggested “hyphenated Americans” were inherently disloyal to the U.S. – especially the Irish, given their anger towards the British, who were America’s ally in World War I.

Enjoying McCormack’s music was one way Irish Americans could prove they were patriotic, while also displaying pride in their native land.

Of course, it was not just the Irish who embraced McCormack. He sold out venues all over the country, and when he came to any large city, he was greeted by their most famous residents, such as Detroit’s Henry Ford. By the time Caruso died in 1921, it was widely believed McCormack was not just the most popular, but also the most talented, singer alive.

As sales of recorded music increased, and the reach of radio widened, McCormack was there to ride the new technological wave. He also crossed over into the movies. In 1929, he was paid $500,000 to appear in a stage-Irish film entitled Song O’ My Heart.

At various times McCormack had an apartment on Park Avenue, a farm in Connecticut, and a home in the Hollywood Hills. But despite his nearly global reach – he also toured Asia to great acclaim – McCormack never forgot where he came from.

In 1925, the McCormacks spent their summers on a large estate in Kildare. That same year he honored his parents at a Dublin concert, singing “When You Are Old and Grey” to his father while serenading his mother with his show-stopper “Mother Machree.”

Understanding how blessed he was, McCormack also dedicated his life to helping others. The Red Cross and various Catholic charities were among the many causes to which he donated vast sums of money. Following his performance at the 100th centennial of Catholic Emancipation in Dublin, McCormack was named a Count of the Holy Roman Empire, an honor he cherished. So dedicated to these causes was McCormack that at times he failed to take his own health into account, touring until he was exhausted. By 1938, McCormack had more or less retired, performing only at his son’s wedding in 1941. 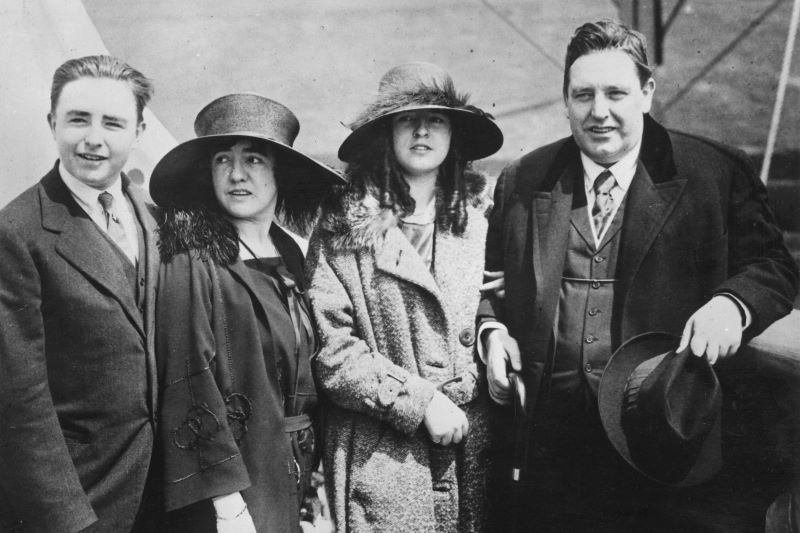 John McCormack pictured with his wife and children boarding a ship to Ireland. (Getty Images)

McCormack died a few years later but his legacy clearly lives on.  “The Irish tenor” is now a beloved brand on the international music scene, thanks to the trail first blazed by John McCormack.  Meanwhile, every time the latest pop singer or rap star crosses over into movies or television, they should be reminded that McCormack did it almost a century earlier.  Not only that, he worked tirelessly to return the many blessings he’d received. Not bad for a young kid from Athlone named Giovanni . . . uh, John, that is.

Visiting Ardmore, in Waterford, is about more than dramatic scenery