Review of "John Hume in America: From Derry to DC" by Maurice Fitzpatrick. 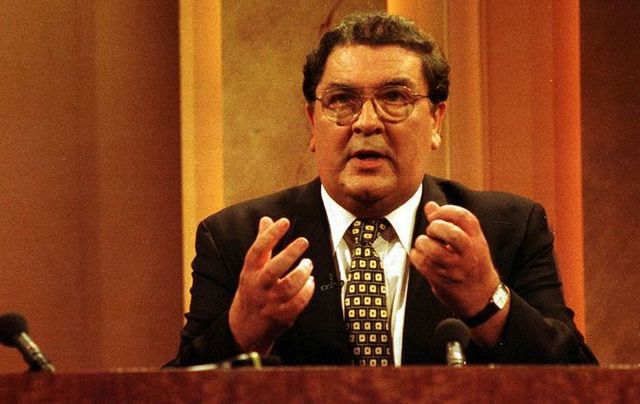 Review of "John Hume in America: From Derry to DC" by Maurice Fitzpatrick.

*Editor's Note: This review by Cahir O'Doherty was originally written in 2018. We are resharing it as we commemorate the life of the great Irish peacemaker John Hume, who passed away on August 3, 2020.

It's time to consider the great contribution made by Derry-born politician John Hume, 87, to peace in the North because, simply put, it was inestimable.

In John Hume in America: From Derry to DC, author Maurice Fitzpatrick sets out, in prose clear as glass, just how hard Hume struggled to achieve that peace, and how much we are all now indebted to him.  What was once his political strategy is now our political reality.

But now, in a new political moment when Sinn Fein and the DUP have reached an impasse with no last moment breakthrough on the horizon, it's also time to consider just how much we all stand to lose if the process that Hume made his life's work is allowed to falter or collapse over the latest line in the sand ideological squabble.

Fitzpatrick's book, a companion piece to his acclaimed film In the Name of Peace: John Hume in America, reminds us how in the early 1990s the Clinton administration and top-level American political players were all individually persuaded by Hume to commit to a push for peace in the North. He had approached them for the simplest reason imaginable: there was literally nowhere else to go.

In the beginning, the British were still very reluctant to challenge the unionist veto since that had been the touchpaper that had ignited The Troubles in the first place. Dublin, however, wanted a renewed push for a new political process but it knew it could not make the request alone. That left the U.S. to apply the needed political pressure on the unionists.

That Hume succeeded in this regard must now be seen for the remarkable political heavy lifting it was. He was asking for decades of tradition to be upended, in particular decades of the longstanding political and diplomatic traditions between the U.S. and Britain. At the time the request was as groundbreaking as its deliverance.

America was becoming the key to it all. It began with the Ireland Fund, a President Carter initiative that created jobs and eventually fair employment legislation, which in turn eventually led to a dramatic change in the way the North was policed.

Kennedy in particular helped shepherd Hume and his efforts though the House and Senate, and arranged for key meetings with the Clinton administration when the time came to take the renewed campaign to the highest levels.

The gambit worked and it worked continuously. Margaret Thatcher famously remarked that she had only signed the Anglo-Irish Agreement in 1985 because her hand had been forced by the Americans. Later John Major and Tony Blair also found their efforts being lauded or leaned on by the U.S.

When Bill Clinton appointed Senator George Mitchell as United States special envoy for Northern Ireland the British were initially infuriated. They understood immediately that the position would not simply be tokenism, but would represent the Oval Office's deep involvement with and interest in events on the ground.

Fitzpatrick lets us see each one of Hume's contributions. He did not care who got the credit as long as the wider plan was saving people's lives. He understood that one side could never hope to vanquish the other, that the war had failed on both sides and there was no choice, in other words, but to make peace.

Fitzpatrick quotes Hume: “Ireland is not a romantic dream; it is not a flag; it is 4.5 million people divided into two powerful traditions. The solution will be found not on the basis of victory for either, but on the basis of agreement and a partnership between both. The real division of Ireland is not a line drawn on the map but in the minds and hearts of its people.”

Dismantling that division was truly Hume’s life work. Peace can only be attained through power-sharing, partnership, and the principle of consent he taught us. Hume understood that it was a lesson that needs to be continuously recalled.

So we all stand on his shoulders now regardless of where you come down politically, and we can all agree that his efforts have changed Ireland forever. There was a greatness about his political life. It's time we got to grips with it and with his legacy.