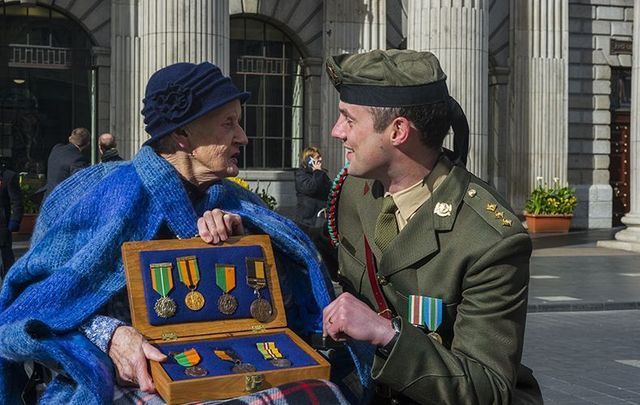 Many feared the Easter Rising centenary commemorations last year would be divisive and lead to rancor and discord.

Instead, they became a grassroots success. The Government proposed, but the people disposed. The commemorations were one of the biggest acts of mass participation entered into by the Irish people at home and abroad.

Some 3,500 events alone were organized in Ireland with at least another 1,000 abroad. They ranged from the big set piece Irish state events of Easter weekend in Dublin to local communities reclaiming the historical legacy for themselves. 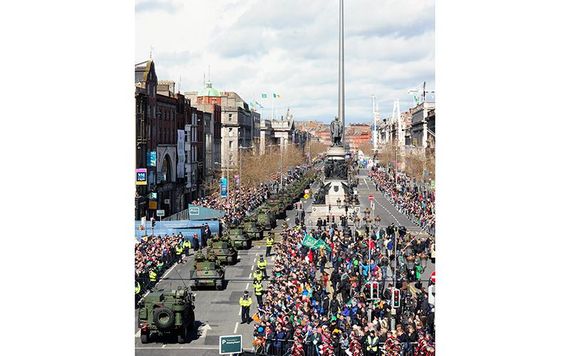 Children too embraced the commemorations with the Flags for Schools initiative giving them a new perspective on the tricolor. Thousands of schoolchildren also took the opportunity to write a Proclamation for a new generation.

Last summer the Minister for Culture, Heritage and the Gaeltacht Heather Humphreys sanctioned a commemorative book to mark the year. I had the honor to be appointed editor. The Royal Irish Academy came on board as a partner – a wise choice given its track record of producing not just books of substance, but beautiful publications. 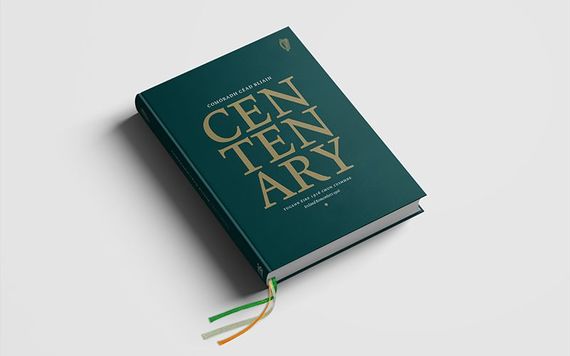 Together we were set a goal of producing a book that was an accurate and comprehensive chronicle of the year. We were fortunate to have at our disposal the work of so many talented photographers, artists and performers.  It is the images that tell the story of the commemoration year. The words supply the context.

It was the year, as Fintan O’Toole put it, that “official Ireland trusted artists”. The results are evident in this book.

The Easter Rising was an event of international significance. It presaged many of the independence movements which led to the redrawing of the map of Europe after the First World War. It also provided the inspiration for many ex-colonies to win their independence.

The diaspora was one of seven strands to the commemoration program identified by the Irish Government. Recognizing the role of the diaspora was also an imperative for us involved in the production of the book.

Nowhere outside Ireland were the commemorations embraced as widely as they were in the United States. The Proclamation borrowed heavily from the Declaration of Independence. The Easter Rising could not have happened without “our exiled children in America” nor would the Irish Free State have emerged as it did without the political and financial support of Irish America.

Though different in scale, Ireland and the United States were ex-British colonies which won their freedom through armed rebellion. We are countries founded on ideals as expressed in the Proclamation and the Declaration of Independence. Those ideals remain potent today even if we have fallen short in many aspects.

In March last year US Vice President Joe Biden launched the Ireland 100 program in Washington DC’s John F. Kennedy Center for the Performing Arts. Ireland and the United States, he said, were countries “divided by distance but united by history”.

The commemoration year was one in which Biden rediscovered his Irish roots on his mother’s side visiting Louth and Mayo.

Ireland 100 was the biggest event of the global diaspora program with 500 artists and 30 productions, many of whom were sold out. It features as a chapter in the book.

Ireland 100 festival at the JFK Center for the Performing Arts, Washington D.C.

Springfield, Massachusetts unveiled a commemorative garden, New York named a street Easter Rising Way, Grace Cathedral in San Francisco remembered the leaders of the Rising in a commemorative concert, Butte, Montana staged a major conference on Irish studies and the University of Notre Dame produced 1916: the Irish Rebellion, a documentary which was screened around the world and on American Public Television. 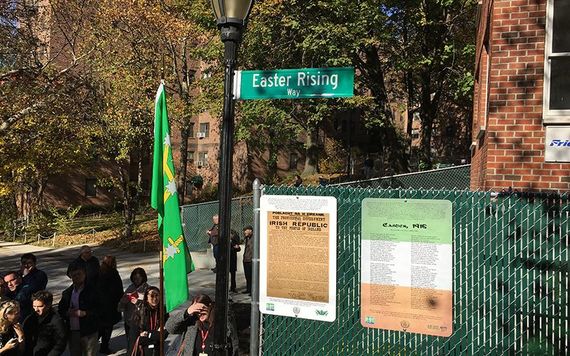 There were so many events in the United States alone that it was impossible to list them all. They are represented in the book by dots in a map which show the scale and range of places where Easter Rising commemoration events took place around the world. There were events in more than 150 cities and 60 countries. 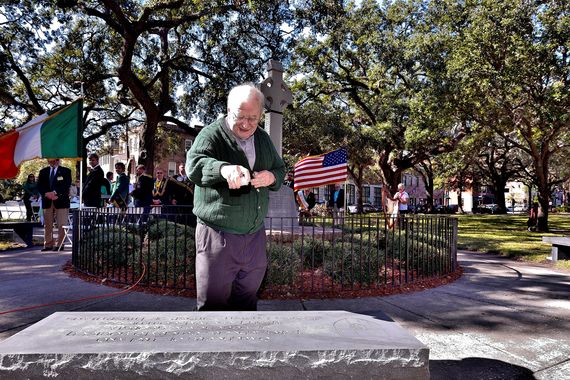 A feature of the book is 50 individual testimonies from those who played a part in the commemorations. Most are relatives for whom the commemoration year was a matter of deep personal pride. Williams Rossa Cole from New York recalled how the looming centenary inspired him to make a documentary about his great-grandfather Jeremiah O’Donovan Rossa.

His is as much an American story as it is an Irish one. He witnessed the Famine, was later imprisoned in Britain for his Fenian activities and exiled to America.

On the centenary of his death, a service was held at St Peter’s Church in Staten Island, the same church where the original funeral mass took place.

Some are well known figures such as Senator George Mitchell who spoke at an event in the Abbey Theatre remembering how the history of modern Ireland is bookended by events that happened at Easter - the Rising and the signing of the Good Friday Agreement.

Melissa Mark-Viverito, the speaker of the New York City Council, writes in the book about how the rebellion “declared to the world that self-determination and sovereignty were inalienable rights”.

The commemorations in 2016 brought some pride back to the country following the collapse of the Celtic Tiger and the subsequent loss of economic sovereignty.

On the walls of the Garden of Remembrance in Dublin are inscribed the words from the poem by Liam Mac Uistin.

In 2016 Irish people everywhere remembered the generations of the vision.

* Ronan McGreevy is the editor of Centenary – Ireland remembers 1916. Centenary can be purchased on Amazon.com.