The face of the 1916 rebel Countess Markievicz project on to the GPO on O'Connell Street for the International HerStory Light Festival. Twitter / HerStoryIreland

Over the ten years of IrishCentral.com we’ve always been heartened, come the start of spring, that our passionately Irish-loving audience from around the world has a profound interest in St. Brigid, the oft-forgotten female patron Saint of Ireland and formerly the Pagan goddess linked to the Celtic holiday of Imbolc. In the age of #MeToo and Time’s Up it seemed only right that IrishCentral team up with HerStory in the run-up to St. Brigid and celebrate strong Irish women from history, some of whom you may never have heard of.

Herstory was founded in 2016 when it’s Founder and Director, Melanie Lynch the lack of women in Ireland’s narrative. As the movement’s website states “in contrast to the handful of women we learn about in Irish schools, Herstory discovered that there are over one thousand remarkable women featured in the Dictionary of Irish Biography. Countless names are missing. The amnesia of women’s stories is not just an Irish problem - this is a global phenomenon.”

Lynch tells IrishCentral “Herstory is a compassionate feminist movement. Our focus is empowering the feminine through storytelling, whilst healing the rift between the masculine and feminine.” And what better week than St. Brigid’s Day week to feature just some of these stories on IrishCentral. 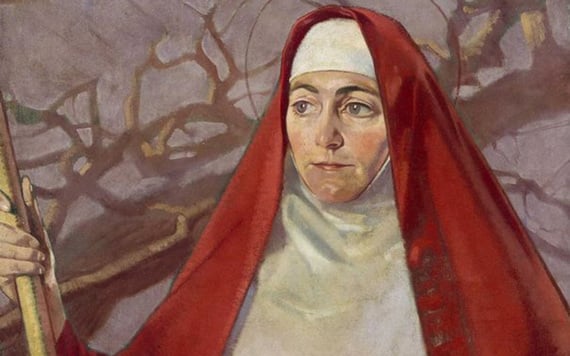 A painting of Saint Brigid.

Lynch delved into the significance of St. Brigid to the Herstory movement pointing out that while the saint from Kildare is Ireland Matron Saint, the Goddess Bríd, the Celtic pagan triple goddess who was re-appropriated by the Church.

The Founder of Herstory went on to tell IrishCentral “The Goddess Bríd is a key feminine icon in Irish mythology. In the context of modern Ireland, she stands as a liberal icon, transcending doctrine and dogma.

“Truth be told, Brigid was the first recorded abortionist, as documented in the Irish annals. She was also a lesbian. What a contradictory and radical character for a Catholic Saint! I’m surprised she wasn’t made into an icon of the both the Marriage Equality Referendum and the Referendum to Repeal the Eighth Amendment.”

“What I love about Brigid is it’s impossible to put her into a box.”

What could be more fitting a figure for modern times than that!

A statue dedicated to St. Brigid.

Lynch agreed with IrishCentral in the thought that the Irish should give more focus than St. Brigid’s Day.

“I think you only have to look at the global success of St. Patrick’s Day, the celebration of Ireland’s patron saint, to see how the Irish - at home and abroad - have neglected the feminine and St. Brigid, our matron saint.

The good news is this is changing, slowly but surely. Just like St. Patrick’s Day was regenerated by the Irish diaspora, Irish Embassies and Irish cultural centers around the world are leading the way and starting to make a point of celebrating St. Brigid’s Day. Back home in Ireland, we have some catching up to do.”

Having worked with Lynch over the last three years here are just some of the stories we’ve featured over the years:

The three famous Pegs of Irish history and telling Herstory

- Amazing Irish American female journalist who covered US elections since 1936

The face of the 1916 rebel Countess Markievicz project on to the GPO on O'Connell Street for the International HerStory Light Festival. Twitter / HerStoryIreland