Brendan Finucane, aka "Spitfire Paddy," was the youngest pilot ever to rise to the rank of Wing Commander and one of the highest kill rates in RAF history. 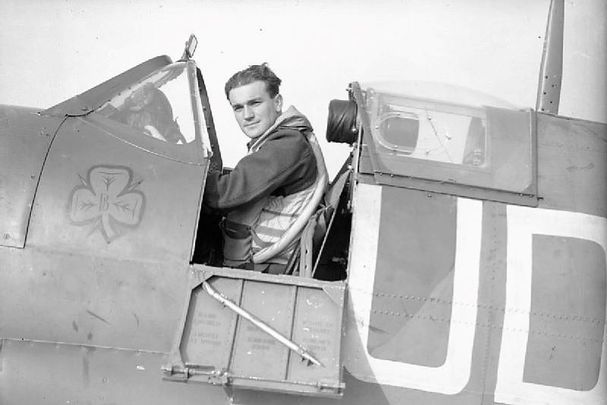 1941: Flight Lieutenant Brendan 'Paddy' Finucane DFC, an Irishman who flew with the Royal Air Force, seated in the cockpit of his Supermarine Spitfire at RAF Kenley while serving with No.452 Squadron RAAF. Public Domain/WikiCommons

Son of an Irish rebel, Brendan Finucane, more commonly known by his nickname “Spitfire Paddy,” was a legendary fighter pilot for the Royal Air Force who blasted his German opponents out of the air in the Battle of Britain during World War II.

Born in Dublin in 1920, Finucane still owns the record of the youngest pilot ever to hold the rank of Wing Commander, rising to the position at just 21 years of age, and has one of the highest kill rates in RAF history.

The fighter pilot’s story is an incredible one and it’s no wonder he was revered as a hero by the British and Americans alike for the bravery and skill he showed fighting in a war that many of his countrymen and indeed, his country, had chosen to remain neutral in.

As it happened, his family had a history of fighting against the British, not with them, as his father accompanied former Irish President and revolutionary leader Éamon de Valera into battle in the 1916 Easter Rising, fighting from Boland’s Mills.

Finucane acquired a passion for flying at a young age at Baldonnel Airfield near Dublin where he took pleasure flights on an army plane before the family relocated to England in 1936.

When it became apparent that Germany was becoming a major threat, Finucane then 17, volunteered to join the Royal Air Force (RAF) and use his passion for flying for the better. He even wrote “[flew] as passenger in army plane at Baldonnel, Co. Dublin” on his RAF application, referring to his experiences in Dublin as a boy.

He was quickly in action and flying Spitfires when the Battle of Britain began in 1940 (one of nine Irish men who flew in the battle), shooting down his first German fighter on August 1 of that year.

The hits quickly ran up, as Spitfire Paddy blasted his foes. He was easily recognizable to his friends, thanks to the bright green shamrock painted under the cockpit of his plane.

His skill and the number of German fighters he hit meant that he was quickly promoted through the ranks, reaching wing commander at an incredibly young age.

Finucane became the poster boy for the RAF during the war, especially when he shot down the famed German fighter pilot Adolph Galland.

“I shoot to hit the machine, not the lad in it,” Finucane once said.

“At least I hold him no grudge, but I have to let him have it. See him first before he sees you, hit him when you fire as you might not have a second chance.”

After being interviewed in England by the BBC and across the Atlantic in the US, his star shot up through the sky, but he never forgot Ireland

He once told an interviewer how precious he considered his Irish blood: "The cockpit was awash with blood. It was not until I was feeling a bit sick and dizzy did it dawn on me that it was my blood!"

"It was good Dublin blood which, I thought, should not be wasted.

"How I even managed to land without a crack-up will never be known. The luck of the Irish triumphed that day."

Heralded as “The Fighting Gael” and "Flying Shamrock terror of the Nazis” by the US press, Finucane and his bravery has been generally forgotten in Ireland until the past number of years and a reawakening of interest in the stories of those Irish men who fought for the British despite the years of conflict between the two countries.

"My uncle was probably the most preeminent of that generation of Irishmen who volunteered to come and fight (with Britain) in the Second World War," said his nephew, Brendan Finucane QC.

"His story was not told in Ireland because of censorship there during the war and because it was ignored in the years following."

"My uncle was a combination of being a true Irishman, but also realising he was fighting for the Royal Air Force and for Britain.

"As he was awarded some of the highest honors for gallantry by the king, he clearly also knew he was fighting for the Crown itself," he continued.

Aged just 22 years old, Spitfire Paddy was hit by machine-gun fire while flying low over a beach at Pointe du Touquet, France. He was too low in the sky to allow him to bail out. Finucane faced into the sea and left his squadron with the words, “This is it, Chaps.”

Preview piece ahead of a BBCI documentary tonight on "Spitfire Paddy", the Irish ace who gave his all in Battl... http://t.co/8ZvmCQl03W

Spitfire Paddy: the flying Irish ace who gave his all in Battle of Britain http://t.co/bL0GCe9Imr pic.twitter.com/sIW4deYzF8