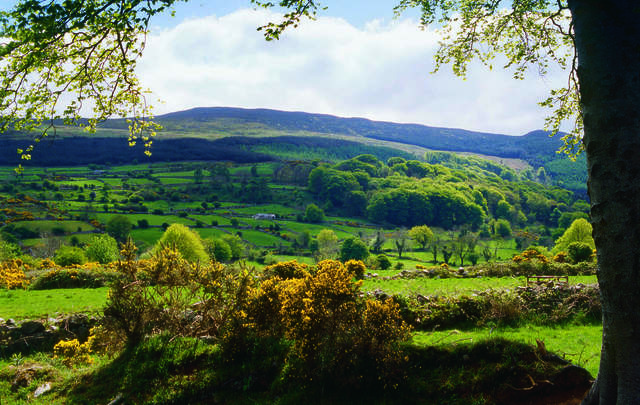 Redmond O’Hanlon was born circa 1640 near Poyntzpass, County Antrim, or at the foot of nearby Slieve Gullion. His family lost its lands to the English Crown over a period spanning from about 1560 to 1653. These events kindled the fire and fury in O’Hanlon’s soul which set him on his rebel path.

This article was originally published in Ireland of the Welcomes, in the July / August issue, 2018. Subscribe today for more.

There isn’t a complete picture of Redmond O’Hanlon’s early life, but he reportedly attended school in England where he mastered upper-class ways and manners and the English language. He worked as a foot-boy and was sacked for attempting to sell a stolen horse by disguising it with an artificial tail. Supposedly present during a quarrel that resulted in the murder of a man, O’Hanlon fled abroad, eventually to France where he joined the army. His military service, heritage, and education led the French to refer to him as Count O’Hanlon.

O’Hanlon returned to Ireland sometime following the ascension of Charles II to the kingships of Britain and Ireland in 1660. Stuart-supporting landowners such as the O’Hanlons soon discovered that their properties would not be returned under the new King, leading some such as O’Hanlon to strike out into the hills and mountains and join the Tories.

O’Hanlon was now fluent not only in Gaelic and English but also in French. His linguistic ability, military experience, and refinement along with his talent for mimicry made O’Hanlon adept at impersonating characters from all walks of Irish society, be they countrymen, merchants, or king’s officers. Indeed, O’Hanlon’s talents and accomplishments made him ideally equipped to be a formidable highwayman and guerrilla fighter in Ireland at the time.

O’Hanlon’s hideouts included woods around Slieve Gullion, the Mourne Mountains, and the Fews Mountains of South Ulster. He applied military precision and organisation to the operations of his gang of about 50 men. He ran a protection scheme in counties Armagh, Down, and Tyrone, extorting money from landowners, rich merchants, and sometimes from members of the general population. He levied a fee of 2s 6d on farmers to assure the safety of their livestock and horses. Some travelers, such as pedlars, required a pass issued by O’Hanlon in order to journey unmolested through his lands. O’Hanlon protected the animals of those who paid the annual fee, retrieving and returning those which had been rustled, and paying for those which he failed to recover.

Small-time criminals of the area rarely meddled in O’Hanlon’s doings or broke his rules, such was his reputation and his near-sovereignty of his territory. Those who did violate his laws received warnings for the first two offenses and a death sentence for the third. O’Hanlon was known to scrupulously keep his end of any bargain or agreement.

As with other famed highwaymen, O’Hanlon was known for his cleverness and ingenious stratagems. In one escapade, O’Hanlon disguised himself as a country gentleman and requested of the authorities that he be granted a military escort. He claimed that he feared a highwayman would steal the gold he was carrying. O’Hanlon had his request granted, and the group set out on the journey. At a prearranged location, O’Hanlon’s gang set upon the military men and confiscated their arms, money, and clothes.

In another episode, a disguised O’Hanlon got the soldiers of a Mullaghbane landlord’s army escort drunk. Once they were in a celebratory mood, O’Hanlon convinced them to fire off their guns to mark the happy occasion. After their firearms were emptied, O’Hanlon’s gang pounced, robbing the landlord and taking the soldier’s uniforms.

On one occasion, a young man did outsmart O’Hanlon. He’d been entrusted with a large amount of money to be delivered to his master. Suspecting that O’Hanlon would hold him up, the young man filled a second purse with either a lesser sum or simply junk and stones. He chose an especially disagreeable horse to ride on his errand. As anticipated, O’Hanlon accosted the young man at gunpoint and demanded the purse of money. The would-be victim threw the second purse into an adjacent marsh and told the highwayman to fetch it. While O’Hanlon searched the marsh, the young man dismounted, leaped on the Tory’s horse, and fled, leaving O’Hanlon with the disagreeable mount, and so unlikely to give chase.

Living by the philosophy that loyalty inspires loyalty, O’Hanlon was known to disperse his funds amongst his followers and supporters, rather than hoard them for himself. He allowed his men to eat well and drink good liquor, while he practiced temperance and frugality. These habits were partially intended to be conducive to self-preservation.

Price on his head

The rise in highwaymen made bounty hunting a popular activity. According to tradition, members of the Johnstons, a planter family, once pursued O’Hanlon to the edge of Carlingford Lough. Faced with no option but to swim for his life, O’Hanlon plunged into the waters, and the Johnstons sent in a massive hound after him. The dog caught up to the outlaw and the two fought in the water until O’Hanlon drowned the beast, and then made his escape.

Those who attempted throughout the 1670s to apprehend O’Hanlon were always outmaneuvered. Dublin authorities put a £10 price on O’Hanlon’s head in 1674. It is at this point where the outlaw steps out of legend and into the official records of Irish history. In 1676 wanted posters advertised for the outlaw’s capture, dead or alive.

Archbishop Oliver Plunkett directed Father Edmund Murphy, a Catholic priest based at Killeavy, County Armagh, to deliver anti-O’Hanlon sermons from the pulpit. Murphy alleged that O’Hanlon warned the priest to cease in this activity, but Murphy ignored the caution. O’Hanlon then issued a threat to parishioners to avoid Murphy’s services, warning that a third offense would result in death. When this fate befell two Killeavy residents, Murphy vowed revenge against O’Hanlon.

Murphy plotted with one of O’Hanlon’s former co-conspirators, a man named O’Murphy, to capture or murder him. O’Murphy had already been rebelling against O’Hanlon by robbing the traveling pedlars despite them carrying the Tory’s passes.

To Father Murphy’s astonishment, those in command of the local British Army garrison were disinclined to provide him support due to their own mutually profitable agreements with O’Hanlon. The plan came to naught, as O’Murphy was murdered by another associate before the scheme against O’Hanlon could be enacted.

In 1679, landowners tried to get O’Hanlon out in the open by cutting down his Poyntzpass hideout, Glen Woods, but to no avail.

In May of that year, landlords of Armagh, Down, and Monaghan hired 30 mercenaries for three months to track down O’Hanlon and his gang. These soldiers of fortune each earned 9p per day, and the bounties stood at £30 for O’Hanlon and £20 for any one of his men, but when the allotted time ran out, O’Hanlon remained at large.

Henry St. John, an Anglo-Irish landowner was brutal to anyone he suspected of assisting O’Hanlon. O’Hanlon retaliated by ordering the highway robbery of St. John’s rent collectors and factors, and the large-scale rustling of his cattle.

In turn, St. John mounted a private war against O’Hanlon, which became more frenzied when St John’s 19-year-old son died from an illness contracted while on a quest for the outlaw.

On 9 September 1679, St John was riding on the Tandragee estate when a gang of outlaws kidnapped him. The raiders warned the vicar accompanying him that a rescue attempt would result in St John’s death. Then a group of St John’s tenants galloped onto the scene and opened fire on the Tories. In the melee, St John was mortally shot in the forehead. It was claimed the shot was fired by the man who was leading St John’s horse, but the rumor amongst the Armagh gentry was that the fatal wound was a result of friendly fire. There were also whispers that St John’s death was just desserts for his dishonorable treatment of the outlaws.

At St. John’s funeral, the vicar denounced the outlaws and all who had dealings with them, and called on Protestants to revolt and eradicate them.

In Ulster's oral tradition, O’Hanlon went to earth at Letterkenny where his family was established as merchants. He stayed in hiding until the furor over the death of St. John subsided. In at least one version of the story, O’Hanlon had a romance with St John’s daughter – a state of affairs that would have added another dimension and numerous complications to the feud between St John and O’Hanlon.

In 1680, the Duke of Ormonde enlisted William Lucas, a County Down Anglo-Irish landlord, for "the Apprehending, Killing, and Destroying of proclaimed Rebels and Tories". Lucas, whose family had long had a profitable relationship with O’Hanlon’s gang, was granted military support for the task. Lucas was further authorized to bestow royal pardons on any men who turned against their brethren and aided in the capture or destruction of them.

Lucas met with Arthur O’Hanlon (reportedly Redmond’s foster brother and lieutenant) and offered him a pardon and half of the bounty (which by then had skyrocketed to £200) for the assassination of Redmond O’Hanlon.

On 25 April 1681, possibly after the two men had had words, Arthur O’Hanlon shot the outlaw leader in the chest with a blunderbuss while he slept in a cabin at Eight Mile Bridge near Hilltown, Co Down.

O’Hanlon’s loyal men removed his head from the body and hid it to prevent it being publicly displayed, but it was discovered and mounted on a spike at Downpatrick Prison.

O’Hanlon’s remains were interred in an unmarked grave at Relicarn Graveyard in the Parish of Ballymore.

Besides sharing the bounty for the deed, Arthur O’Hanlon received the promised full pardon, and Lucas a lieutenant’s commission.

Lucas, with Arthur O’Hanlon’s assistance, continued as a bounty hunter slaughtering many and terrorizing the native Irish in several counties.

According to a 29 May 1681 letter written by a Captain Thomas Whitney to the Duke of Ormonde, the bounty hunting had degenerated into indiscriminate butchery committed under the authority of the Duke.

Sir Walter Scott was so impressed with the tales of O’Hanlon that he planned to write a novel based on his life and adventures. Lady Olivia Sparrow of Tandragee compiled material on O’Hanlon which Scott would have used, but the project never came to fruition.

However, readers interested in a fictionalized account of the story of O’Hanlon can turn to Redmond Count O’Hanlon; The Irish Rapparee, a novel by William Carleton published in 1862.

This article was originally published in Ireland of the Welcomes, in the July / August issue, 2018. Subscribe today for more.