In 1984 an attempted drive-by hit on the Sinn Féin leader was thwarted by a special unit RUC officer. 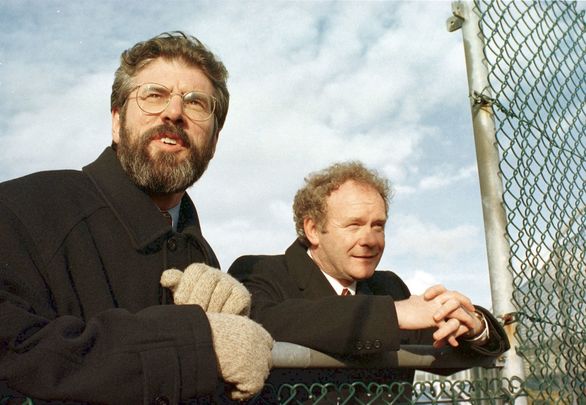 When a group of the Ulster Freedom Fighters attempted to kill the newly elected leader of  Sinn Féin it was an officer from a special unit of the Royal Ulster Constabulary who credit for his life.

Members of an elite RUC squad, E4 HMSU, part of the special branch have claimed on several occasions they saved the leader of the Sinn Féin political party, Gerry Adams, during the Troubles in Northern Ireland.

Following several attacks and deaths within the Irish Republican Army, it became clear that the Sinn Féin President Gerry Adams would be on the hit-list for loyalist paramilitary organizations.

On March 11, 1984, Adams, the newly elected President, then 35-years-old was shot by members of the UFF in the center of Belfast city. Adams was on a lunch break from the Belfast Magistrates Court, where he was appearing for obstruction charges.

The car he was traveling in was ambushed and riddled with 20 bullets. He was shot in the neck, should, and arm. Three other people traveling with Adams were also injured.

The assassination attempt was thwarted by an off-duty RUC officer ad two plainclothes military police officers who were in the vicinity.

Following the attack, a statement from the UFF named Adams as "the chief of staff of the IRA, responsible for the campaign of murder and therefore a legitimate target of war." The statement warned that the UFF would "get him again".

Adams was seriously injured and made a full recovery following surgery at the  Royal Victoria Hospital.

The E4 HMSU (part of the RUC Special Branch) was tasked with protecting Adams. "Jack", a member of the unit, claimed to the Belfast Telegraph "We saved Gerry Adams' life more than once. At least twice, if not three times."

Speaking about another attempt on Adams' life, "Jack" said "The loyalists had a simple plan. It was to be simple and effective. There was a cinema down there (west Belfast) - it's now a hotel - and behind there Adams held court in a wee clinic where people would have been able to bring their problems. He used an armored car - bulletproof except for the roof - and loyalists planned to drive by on a motorbike and plant a limpet mine on the roof.

"We stopped that. We saved Adams' life."

Other E4 HMSU members claimed the RUC group did not discriminate and were only too happy to protect the leader of the republican political party, Sinn Fein. They added that they were not involved in systematic collusion with loyalist paramilitaries.

Another member "Ronnie" said "Collusion? If there had been collusion, we'd have cut off the head of the snake. As it was, we tore a few strips off its body and took away its rattle."

Years after the 1984 attempt the UFF made good on its promise. There was another attempt on Adams' life. On May 20, 1987, Brian Nelson, the UFF's intelligence officer and agent in Britain's Force Research Unit, informed his handlers that an attack was imminent.

Six weeks before Adam's 1984 attack he had said he believed he had a 90 percent chance of been assassinated.

Two loyalist gunmen, including John 'Grugg' Gregg, who was later shot dead during a loyalist feud, were jailed the following year for this attempted murder.

In 2018 Adams said “I have escaped a number of attempts to kill me and so on. I have been blessed by some very incompetent assassins, so there are lots of good things in life."