Learn about how the New York Jewish community made donations to Ireland during the era of the Great Famine. 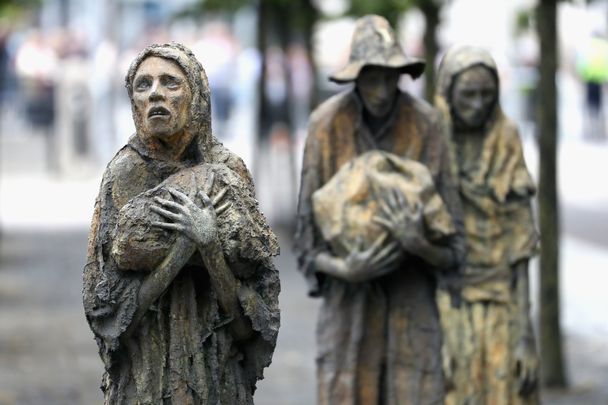 Did you know that New York's Jewish community made substantial contributions to Ireland during the Great Famine?

While there has been major coverage of the Choctaw Indians' donation to Irish famine relief, less well-known is the work of New York Jewish leaders to help the starving Irish.

A previously unknown act of kindness by the Jewish community in New York sending relief for the Irish Famine was uncovered in 2010.

Then President of Ireland Mary McAleese, while visiting New York, attended a ceremony at the Congregation Shearith Israel to mark the generosity of the New York Jewish community to the people of Ireland during the Great Hunger.

While people in Ireland were dying by the day because the potato crop failed in 1846, a Jewish rabbi in New York reached out to his community and raised a substantial sum of money to help the Irish. The money raised was in the $1,000 range, close to $82,000 in today’s money.

A newspaper report around the time stated that New York had contributed as much as $80,000 in total, and claimed that this was "about the same sum that has been contributed at home from all the wealthy classes of Ireland to the Central Relief Committee for all Ireland."

In 2010, Rabbi Hayyim Angel of the Congregation Shearith Israel located at West 70th Street stated that Lyons applied the teachings of the Torah when he reached out and helped the people of Ireland during their toughest era.

Money was also raised by the Temple Shaaray Tefila and an individual contribution of $500 was given by banker August Belmont (founder of Belmont Racetrack).

While Lyons, who was among those who founded the Jews Hospital (now Mount Sinai), recognized that the Jewish community in New York needed dollars for its own internal needs, he insisted that his community reach out to help the people of Ireland.

When questioned about sending aid to those outside their own community, Lyons said, "It is true that there is but one common link between us and the sufferers...That link is humanity.”

He continued, “Its appeal to the heart surmounts every obstacle. Clime, color, sect are barriers which impede not its progress thither.”

Although it is not clear how much funds were actually sent to Ireland from the Jewish community, it is estimated to be about $1,000, a substantial amount at the time.

Angel said, “Reverend Lyons held a fundraising appeal at the Synagogue and had the money sent to Ireland for famine relief, and by doing so he aptly applied what the Torah teaches us about compassion and responsibility for all people, in this case, he applied it to a far-away crisis.”

Angel said the 2010 ceremony to mark the New York Jewish community’s aid to Ireland in the mid-1800s was important because “according to Jewish tradition, there are two fundamental elements in commemorating events of the past.

“Remembering our shared memories helps build our identities and shared understanding. More importantly, however, is that our memories inspire us to continue this beautiful legacy of humanistic concern that transcends boundaries of geography and religion,” said Angel.

Very little has been written or known about the Jewish contributions during that era.

The New York Irish Consul Niall Burgess, through a friend, was made aware of the special relationship the New York Jewish community had with the Irish during the Famine through the Jewish Museum in Dublin.

“There are some stories that are well known about Famine relief contributions, but when you look at some of the specialists works on that period the three Jewish contributions don’t feature very prominently,” said Burgess.

The event with McAleese was of three held on Sunday, May 23, 2010, to mark the Great Hunger.

After the commemorative ceremony at the synagogue, a Mass at St. Patrick’s Cathedral was celebrated by Archbishop Timothy Dolan, and a later event at Battery Park commemorated the hunger memorial.

Burgess said the event at the Congregation Shearith Israel was of particular significance.

“This story and others like it -- like that of the Choctaw Indians -- is the reminder of how when a humanitarian crisis happens, how even in the mid-19th century, there is a sense that this just wasn’t our concern, it was everyone’s concern,” he said.

Did you know about the New York Jewish community's support during the Great Famine? Share in the comments.

Lyndon B. Johnson demanded to be sworn in alongside Jackie Kennedy