On This Day: 21 people killed in Birmingham pub bombings in 1974

On November 21, 1974, bombs were detonated in two pubs in Birmingham the UK, killing 21 people and injuring more than 200 citizens. 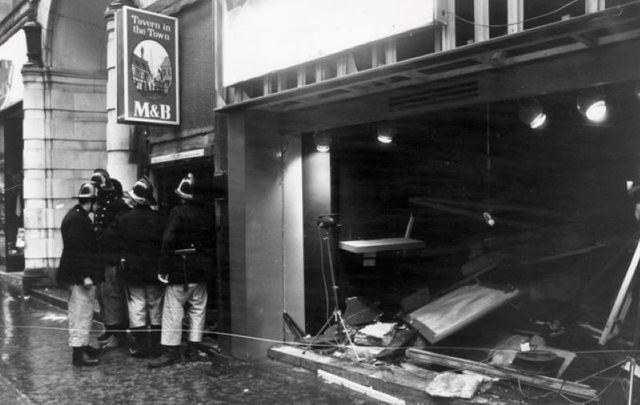 November 22, 1974: Firemen survey the damage outside the Birmingham pub 'Tavern in the Town' Getty Images

On November 21, 1974, bombs were detonated in two pubs in Birmingham the UK, killing 21 people and injuring more than 200. While six Irish men -'The Birmingham Six' - were arrested and sentenced to life in prison shortly after the incident, they were freed in what was deemed a "miscarriage of justice."

A man was arrested in his home in Belfast on Wednesday, November 18 in relation to the 1974 pub bombings in Birmingham in the UK that resulted in the deaths of 21 people.

“A man has been arrested in connection with enquiries into the murders of 21 people in the 1974 pub bombings in Birmingham," the West Midlands Police in the UK said in a statement issued on November 18.

“Officers from Counter Terrorism Policing West Midlands CTU, working with colleagues from the Police Service of Northern Ireland, arrested a 65-year-old man at his home in Belfast today (18 November).

“The man was arrested under the Terrorism Act and a search of his home is being carried out.

"He will be interviewed under caution at a police station in Northern Ireland.”

The arrest comes just a few days before the 46th anniversary of the Birmingham pub bombings, which occurred on November 21, 1974. On that day,  two busy pubs in Birmingham - the Mulberry Bush and the Tavern in the Town - were bombed, killing 22 people and injuring more than 200 others.

Within hours of the attacks, six Irishmen - Hugh Callaghan, Patrick Joseph Hill, Gerard Hunter, Richard McIlkenny, William Power, and John Walker - were arrested. The so-called ‘Birmingham Six’ were sentenced to life imprisonment in 1975, but their convictions were overturned and they were released in March 1991.

With their convictions and imprisonment later deemed a "miscarriage of justice," the six men were awarded compensation ranging from £840,000 to £1.2 million. 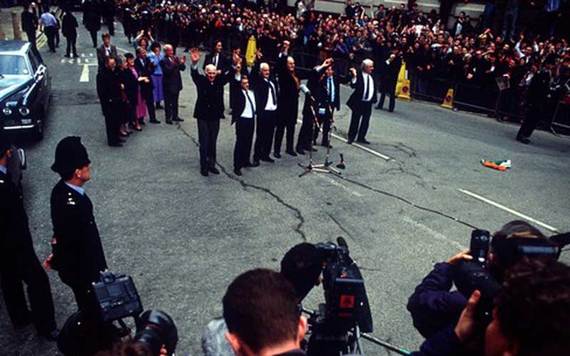 The release of the Birmingham Six. (RollingNews.ie)

In July 2017, Michael Christopher Hayes admitted to being a “participant” in the 1974 attacks and offered an apology to the victims and their families via BBC News, but he refused to say who planted the bombs, insisting he would rather die than reveal the information.

"When we found out what had happened," Hayes said, "we defused the third bomb."

Later, in March 2019, “Witness O,” a former IRA bomber, named four of the people he believed to be responsible for the 1974 attacks, claiming that he had been given permission by the current head of the IRA in Dublin to do so.

In court, Witness O, who was in prison at the time of the bombings, named those responsible as Seamus McLoughlin, Mick Murray, Michael Hayes, and James Gavin. The four men had been previously named as involved with the fatal bombings, but never in a formal setting.

The Guardian reported that on the day before Witness O named those involved, Kieran Conway, the former chief of intelligence for the Dublin IRA, said he did not believe the bombings constituted murder: “No, I don’t agree. I believe it was an IRA operation that went wrong.”

Conway said: “Had the IRA deliberately targeted that pub with the intention of killing civilians then that would have been murder, yes. But in the circumstances, as I have been told, I don’t accept that it was murder.”

In April 2019, a jury ruled that the victims of the IRA's 1974 Birmingham pub bombings were “unlawfully killed" following a six-week inquest, which determined that a botched warning call “caused or contributed” to the deaths of 21 civilians and the injuries of more than 200 others.

In October 2020, the UK’s Home Secretary Priti Patel said she would consider holding a public inquiry in the 1974 Birmingham pub bombings.

Mayor Andy Street, who called the Birmingham attack “the biggest unsolved murder in recent British history,” responded to Patel’s comments saying: “We have been pressing, along with the families, different home secretaries to make this decision.

“I simply sat down with the current home secretary and said 'Priti there is a real issue here, we need you to make this decision'.

“She's examined it herself and she has now decided there is sufficient of a case here to look really thoroughly at the case for a public inquiry.”