Born in Brooklyn and raised in Ireland, William Joyce, a Nazi propagandist, was hanged in Britain for high treason in 1946. 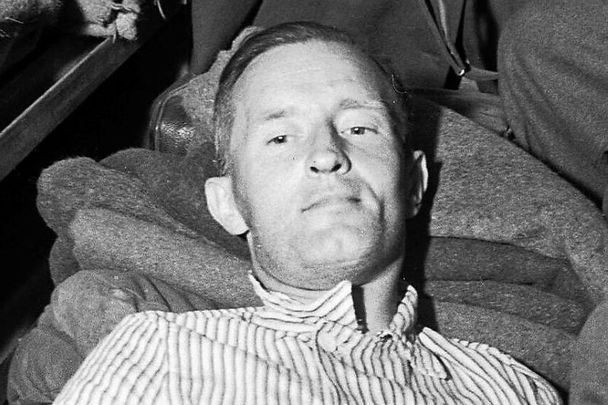 The Capture of William Joyce, Germany, 1945 - William Joyce lies in an ambulance under armed guard before being taken from British 2nd Army Headquarters to hospital. He had been shot in the thigh at the time of his arrest. (Photo: Hardy, Bert, No 5 Army Film & Photographic Unit) Public Domain / Imperial War Museum

William Joyce, who later in life became known as Lord Haw Haw, was born on April 24, 1906.

Derided and reviled for much of his life by those who knew him, William Joyce was Ireland’s most famous Nazi and, after his execution by the British in 1946, one of the most infamous traitors of the whole Second World War.

Nicknamed “Lord Haw Haw” by the British public to whom he broadcast his nightly “Germany Calling, Germany Calling” bulletin of Reich propaganda, he was a proud and defiant Nazi until the very end.

Joyce was born in Brooklyn in 1906 to a Catholic father and a Protestant mother, but the family left New York a few years after his birth to return to his father’s native Galway. Unusually for a Catholic family in the west of Ireland, the Joyces were staunch unionists and it was rumoured in the local area that young William had spied for the Black and Tans during the War of Independence.

In 1921 he moved to England, later claiming that the IRA had tried to assassinate him, and enlisted in the British Army. After his young age was discovered he was discharged by the army. He enrolled at Birkbeck College of the University of London and there he first became interested in fascism. Joyce had a scar on his face which he said was caused by Jews during this time.

After graduation in 1927 he married his sweetheart Hazel Barr, with whom he had two daughters. Initially set upon a career in academia, in 1932 he joined the British Union of Fascists (BUF) and was soon noticed as a charismatic speaker and violent street brawler. The Joyces’ marital home became a den of fascist activity and he moved steadily up the party ranks.

In 1937 he was sacked as a salaried party worker by the BUF after a dismal election. Joyce set up his own National Socialist League with his new wife Margaret; he had divorced his first wife Hazel the previous year.

As the drumbeat of war in Europe grew louder, Joyce maintained contact with numerous Nazi friends and in August 1939 he fled to Berlin with his wife. He was allegedly tipped off by the head of MI5 (the British equivalent of the FBI), Maxwell Knight, that he was about to be arrested and detained under Defence Regulation 18B as a Nazi sympathizer upon the outbreak of war with Germany.

Unemployed and listless in the capital of the Third Reich, a chance encounter with a fellow British fascist in exile lead him to interview at the Nazi propaganda station, Rundfunkhaus, which immediately recruited him to work for their English language service.

Quickly nicknamed “Lord Haw-Haw” by a contemptuous public, at the height of his popularity his nightly “Germany Calling, Germany Calling” bulletin had an estimated six million regular listeners and 18 million occasional listeners. His broadcasts were never officially banned but it was frowned upon by many in society to listen to them. Nevertheless, many continued to listen in intently as Joyce usually beat the heavily censored BBC in delivering news of German victories.

With so many millions of listeners, he gained an almost mythical status in wartime Britain; his strange accent was parodied and he was even the subject of advertising campaigns.

A grateful Nazi Germany quickly made him a citizen of the Reich and in 1944 he was awarded the Cross of War Merit First Class by Hitler.

When not broadcasting he kept himself busy: he wrote a book called "Twilight over England" that compared Nazi Germany favorably to what he maintained was a Britain dominated by the interests of Jewish capitalists. He also enthusiastically attempted to recruit British Prisoners of War into joining Reich’s British Free Corps – a minute regiment of fascist volunteers from the British Empire.

Loyal to the end, he began to drink heavily as the war turned in the Allies’ favor. He made his final broadcast to Britain on the day Hitler committed suicide, April 30, 1945. Clearly drunk, he concluded with a defiant, “Heil Hitler!” and went into hiding with his wife, and occasional fellow broadcaster, Lady Haw Haw.

At large for over a month in occupied Germany, his strange accent raised suspicion and as he reached to retrieve his forged identity papers he was shot in the leg by a British soldier who thought he had a revolver in his pocket.

His capture was greeted with plaudits from London and after a fortnight recuperating in a hospital he was flown back to Britain in chains to face charges of high treason.

However, what prosecutors expected to be a relatively straightforward trial soon floundered over the complex question of Joyce’s nationality. Joyce’s parents had renounced their allegiance to the British Crown to become US citizens and, even though he had fled to Germany on a British passport in 1939, it was clear that he had omitted this key fact when he applied for it. Could a natural born citizen of the United States, raised in Ireland, be tried for treason against a country which his allegiance to was in doubt?

Britain’s Attorney General, Sir Hartley Shawcross, pressed on and argued in court that even if he had fraudulently obtained a British passport, until it expired, he was entitled to British consular assistance and as such was guilty of high treason as, “a person owing allegiance to our Lord the King, and while a war was being carried on by the German Realm against our King, did traitorously adhere to the King's enemies in Germany.”

After a three-day trial, the jury acquitted him on two of three counts; they concluded that none of Joyce’s actions after 1940 when his British passport expired could be judged treasonous as at that point his allegiance was to the United States, not to the British Crown. However, his work for the Nazis between 1939 and 1940 was judged to be treasonous as he had then been in possession of a valid British passport, thus he was found guilty on the third and final count.

Under Britain’s Treason Act of 1945, a guilty verdict returned an automatic death sentence and Joyce was given leave to appeal the verdict.

Curiously, Lady Haw Haw, whose British nationality was unquestioned, was never tried for treason despite having made broadcasts to Britain. Rumors swirled that Joyce had done a deal with prosecutors in order to spare his wife.

His sentence was confirmed in Britain’s Court of Appeal and by the House of Lords – then the nation’s highest court – although his fellow Irishman, Lord Porter from Co Tyrone, dissented on the grounds that there was no evidence that Joyce had kept his British passport for use after September 18, 1939.

With all legal avenues of appeal exhausted Joyce was hanged on January 3, 1946. Unrepentant till the bitter end, his last words were reported as, “In death as in life, I defy the Jews who caused this last war, and I defy the power of darkness which they represent.”

In total, Britain hanged four men as a result of convictions under the 1945 Treason Act but Joyce’s execution was the most controversial. Many people questioned why someone who had never killed anyone was given a death sentence when many high-ranking Nazis escaped with prison sentences.

The dispute about his allegiance to the British Crown also preyed on people’s minds. Norah Elam, his Dublin-born former colleague from the BUF and a staunch Irish nationalist, always argued passionately that Joyce was an Irishman and his conviction should have been quashed as he owed no allegiance to Britain. Conversely, Sir Oswald Mosley – Britain’s most prominent fascist at that time and his former boss – maintained he was a traitor and deserved what he got.

For many years Joyce remained buried in an unmarked grave in Wandsworth Prison where he was executed. However, in 1976, his remains were exhumed at the request of his daughter, Heather Piercey.

Speaking to the Guardian later in life, the retired schoolteacher said the idea of her father’s remains in prison courtyard preyed on her mind. After hearing that the British Government had given permission for Roger Casement, a British diplomat turned Irish republican who was also hanged for treason, to be reburied she petitioned that she be allowed to do the same for her father.

But where could Joyce be buried? Tentatively, Piercey approached Galway County Council about interning her father’s remains in his native land. The county council agreed and one quiet night Joyce’s body was dug up and flown to Ireland for burial in New Cemetery in Bohermore, County Galway.

Speaking to RTÉ radio at the time, Piercey said she was touched by the “warmth” of the local community and by the presence of a number of her father’s school friends at the internment of his coffin in a Protestant section of the cemetery.

A devout Catholic, Piercey returned regularly over the years to tend her father’s grave. “A lot of mould collects on that grave, so I take a plastic bowl, a packet of Ariel, and a scrubbing brush, and it all comes off," she told the Guardian in 2005.

Well into her eighties, Piercey made a final, unsuccessful attempt to have her father’s case reopened in 2011 on the grounds that he could have been a British double agent.

“He was so loyal that every time he heard the national anthem, God Save The King, he stood up,” Piercey told the Daily Express.

“I don’t think he hated Britain at all. He was very pro-Empire. Apparently, when he landed at the airport when he was brought back, he said: ‘Britain, God bless her.’ He was glad to be back on British soil again.

“I don’t have any proof that he was working for the British, but I don’t think that he could have forgotten his pro-British sympathies. It is possible he was a double agent. He never mentioned it in his letters during the war, but then it was the secret service, the silent service.”

But while she wonders whether Joyce was a victim of injustice, Piercey long ago renounced her father's fascist views. She even dated a Jewish man in 1949.

On the twentieth anniversary of her father’s execution, she rang up her local synagogue and asked if she could attend a service. They told her the synagogue always welcomed visitors and ever since she has attended Mass every Sunday and Saturday synagogue twice a month.

"I went as an act of atonement for what had been done. It seemed strange not to hear the name of Jesus mentioned – I'm so used to it – but otherwise I loved the services."

Still, an active member of Britain’s Council of Christians and Jews, the daughter of Hitler’s most famous Irishman and Britain’s most infamous traitor lives a life far removed from the way she was raised.