On this day: Joseph Mary Plunkett Easter Rising leader was born in 1887

The  Easter Rising leader Joseph Mary Plunkett was executed at Kilmainham Gaol in Dublin on May 4, 1916. 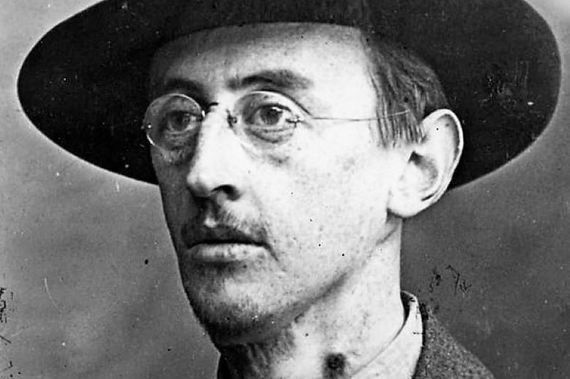 Dubliner, poet, world traveler, the youngest of the signatories. The tale of Joseph Plunkett’s marriage just before his execution has gone down in history. Public Domain

On November 21, 1887, the  Easter Rising leader Joseph Mary Plunkett was born in Dublin.

Between May 3 and 14, 1916 fifteen leaders of the Rising were court-martialed by the British Army under General John Maxwell and convicted. IrishCentral will look at the leaders from James Connolly to Joseph Mary Plunkett and share their stories.

Below Dermot McEvoy takes an in-depth look at the life of Joseph Mary Plunkett and his contribution to Irish history:

Joseph Mary Plunkett was the son of Horace Plunkett, a Papal Count. He was born in Dublin in 1887. If there was one renaissance man involved in the Easter Rising it was Joe Plunkett. He was a poet, editor, world traveler, a bit of a scientist, a pretty good military strategist, and one of the most mysterious of the 1916 leaders. He became a romantic icon with his marriage to Grace Gifford just hours before he was executed. He was also the youngest signatory of the Proclamation.

The Plunketts were a very religious and nationalistic family. (In fact, in the days after the Rising five members of the family – father, mother, and brothers Joe, Jack and George – were all prisoners at Richmond Barracks.) Joe joined the Irish Volunteers when they came into existence and with the onset of the World War traveled to Berlin to make Ireland’s case with the Germans on behalf of the Provisional Government. In June 1915 he produced the “Ireland Report” for the Germans which laid out plans for a German invasion of Ireland to coincide with a Rising. He tried to persuade the Germans that such an invasion would redirect British forces and make it easier for them on the Western Front. The Germans were not convinced and did not back the plan. They did, however, decide to go for Roger Casement’s plan and send rifles to Ireland to be used in the Rising.

Back in Dublin in late 1915, Plunkett was one of the chief military strategists of the Rising. He also became a mentor to a young Volunteer by the name of Michael Collins. Collins had returned to Ireland in late summer 1915 and had gone to work for the Plunketts straightening out their real estate holdings. A close bond developed between Plunkett and Collins and Joe chose Collins as his aide-de-camp and bodyguard during Easter Week.

At the time of the Rising, Plunkett had just had his neck glands operated on in a bid to help him in his battle against tuberculosis. Plunkett had been given six months to live by the doctors.

His illness did not inhibit him in any fashion as he drew his sword and marched into the GPO. During the hellish week, as Pearse sank into something of a funk, Plunkett did his best to keep up the spirits of the men inside the GPO.

Joe Good, a London Irishman and friend of Collins, remembered Plunkett fondly in his wonderful autobiography, 'Enchanted by Dreams.'

“As time dragged on,” wrote Good, “our morale would have begun to weaken, I’m sure if it hadn’t been for Joseph Plunkett. Pearse seems to have shot his bolt. Connolly was gravely wounded, out of action, and out of sight…but Joe moved amongst us all the time, his eloquent comforting words at odds with his bizarre, eccentric appearance, his dangling sabre and jeweled fingers. We all somehow, and in many different ways responded to his gentle sayings and praise. He was greatly loved. Most of us knew that he had risen from his deathbed to lead us…[His] high collar didn’t any longer hide that bandaged throat.”

After the surrender, despite his condition, Plunkett was forced to march from the Rotunda Garden to Richmond Barracks, which nearly killed him. “This man,” wrote General Maxwell to Prime Minister Asquith, “being of good education, exercised great influence for evil over the other members.” He was put on trial and found guilty.

It is at this point that the romantic legend of Joseph Plunkett develops. He was supposed to be married in a double wedding ceremony (with his sister and her fiancé) on Easter Sunday, but could not because of the Rising. He was engaged to Grace Gifford of the politically bipolar Gifford family – half were Unionists and the other half Fenians. Thomas MacDonagh was married to her sister, Muriel Gifford.

After Joe’s sentencing, his one big concern was to marry Grace and, for once, the British cooperated. Grace did all the legwork, getting the ring from a jeweler in Grafton Street and all the legal papers that were necessary to make it happen. The urgency of the situation made people speculate that Grace was pregnant.

Before his death sentence was pronounced Joe sent a note to Grace in which he stated: “I have no notion what they intend to do with me but I have heard a rumor that I am to be sent to England…Listen—if I live it might be possible to get the Church to marry us by proxy—there is such a thing but it is very difficult I’m told.”

“I entered Kilmainham Jail on Wednesday, May 2nd, at 6 p.m.,” Grace later wrote, “when I saw him for the first time in the prison chapel, where the marriage was gone through and no speech allowed. He was taken back to his cell, and I left the prison….I went to bed to bed at 1:30 and was awakened at 2 o’clock by a policeman, with a letter from the prison commandant – Major Lennon – asking me to visit Joseph Plunkett. I was brought there in a motor and saw my husband in his cell, the interview occupying ten minutes. During the interview, the cell was packed with officers, and a sergeant, who kept a watch in his hand and closed the interview by saying ‘Your time is now up’.…Also, his last moments with his wife were not rendered more bearable by the presence of as many soldiers and inane officers as could be crammed into his cell – we who had never had enough time to say what we wanted to each other found that in the last ten minutes we couldn’t talk at all.”

After he received the sacraments Plunkett said to the priest just before being shot: “Father, I am very happy. I am dying for the glory of God and the honor of Ireland.” He was shot between 4:00 and 4:30 a.m.

When the news broke of Grace and Joseph’s wedding the tongues of Catholic Dublin began to feverishly wag. Of course, the big question was: “Is she pregnant?”

Joe’s sister, Geraldine Plunkett Dillon, in her autobiography "All in the Blood" addresses this question. “The story which went round was that she was going to have a baby but that Joe was not the father. I was told on good authority that this story was put about by Dublin Castle.”

But, indeed, Grace was pregnant, and Geraldine relates the terrible story of her miscarriage, one of the last casualties of 1916, in this first-hand account: “I went out to Larkfield to see Grace and was told that she was upstairs in bed. When I went into her bedroom I saw a large white chamberpot full of blood and fetus. She said nothing and I said nothing.”

The romance of Joseph and Grace is told in this haunting melody, written by Seán and Frank O’Meara in 1985, here sung by 11-year-old Caoimhe Mooney:

* Do you love Irish history? Share your favorite stories with other history buffs in the IrishCentral Facebook group.

Dermot McEvoy is the author of the "The 13th Apostle: A Novel of a Dublin Family, Michael Collins, and the Irish Uprising and Irish Miscellany" (Skyhorse Publishing). He may be reached at dermotmcevoy50@gmail.com. Follow him at dermotmcevoy.com.