British Pathé footage of Dublin after The 1916 Easter Rising has been preserved by the Irish Film Institute as part of its Irish Independence Collection. 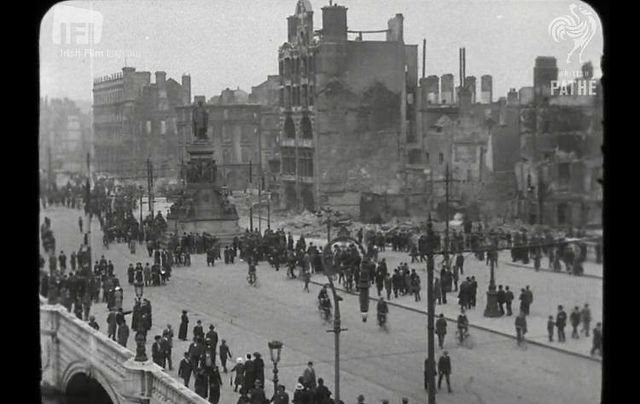 Dublin City in the aftermath of the 1916 Easter Rising. Irish Film Institute

"Dublin 1916," a brief newsreel clip from British Pathé that's been preserved as part of the Irish Film Institute, hints at the devastation caused by The Easter Rising.

The camera slowly pans from Eden Quay, looking down O’Connell Street to Bachelors Walk. The bombing of buildings is still evident as smoke can be seen billowing out broken windows and rubble, as people walk among the smoldering debris.

The footage, captured following the week-long rebellion in 1916, shows a city in ruins following seven days of skirmishes in the Irish capital.

The 1916 Easter Rising would eventually prove pivotal in Ireland's fight for independence, inspiring widespread public resistance during the Irish War of Independence between 1919 and 1921. The brutal and swift executions of 15 Irish leaders in the weeks following the Rising would provoke a wave of public fury and outrage that persisted until the signing of the Anglo-Irish Treaty in December 1921.

The video below is published with thanks to the Irish Film Institute (IFI), who IrishCentral have partnered up with to bring you a taste of what their remarkable collection entails. You can find all IrishCentral articles and videos from the IFI here.