A year of reckoning - Irish conscription during World War I

300,000 Irish men voluntarily joined the British army to fight against German imperialism but Ireland was dead set against the imposition of conscription. 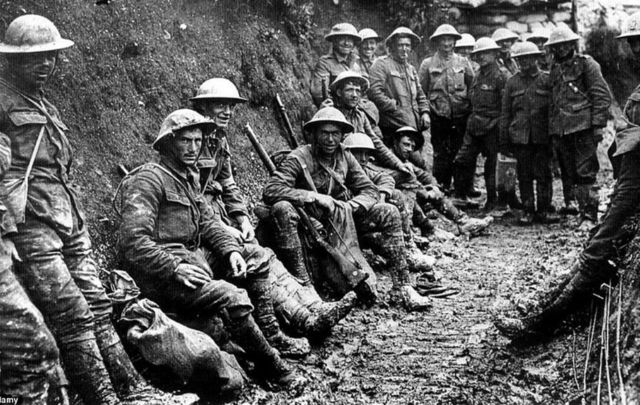 As 1918 dawned, Ireland’s revolutionary fever had waned and Germany looked on course to win the First World War. Within months, however, Ireland had regained its fighting spirit and the German military machine was struggling. By the end of the year, the allies were triumphant, the war in France was over but the War of Independence in Ireland was just beginning.

This article was originally published in the July / August 2018 print issue of Ireland of the Welcomes. Subscribe here.

The British Prime Minister Lloyd George was warned. Even the London Times newspaper called it “an act of insanity”. While as many as 300,000 Irish men voluntarily joined the British army to help the war effort against German imperialism, the country was dead set against the imposition of conscription. It was the one issue that could unite moderate nationalists, revolutionaries, labor activists, and the Catholic hierarchy. But the British army was short on troops and a German offensive in spring 1918 overran allied lines in France.

Lloyd George presumably believed he had no choice. In April 1918 he introduced the Military Service Act, paving the way for conscription to be imposed on Irish men.

The reaction in Ireland was immediate and, for once, unifying. The moderate Irish Parliamentary Party (IPP) joined forces with the upstart revolutionary party of Sinn Fein, Labour activists, and Trade Unionists to form the Irish Anti-Conscription Committee. Meanwhile, the Irish Catholic Bishops called on its flock to oppose conscription “by the most effective means at our disposal” if “consonant with the law of God”.

On 21 April, just days after the passage of the bill in Westminster, mass goers in Ireland with met at the church door and were urged to take a pledge of resistance. Later the next week the Irish labor movement organized a one-day strike which effectively paralyzed the country and saw work stoppages in Government munitions factories. There were widespread rallies with the leaders of the moderate IPP and Sinn Féin, shared the platform.

This was a watershed moment in the politics of the day. The IIP had been the dominant political force in Ireland. Its leader John Redmond had enthusiastically supported the British war effort on the promise that Ireland would be given home rule when the fighting came to an end. But Redmond was increasingly out of touch with the sentiments of many Irish people. He spent most of his time in London and when he did visit Ireland he pointedly retreated to a remote part of Wicklow.

In the aftermath of the Easter Rising, following the execution of three of its leaders, Redmond told the British House of Commons: “This outbreak, happily, seems to be over. It has been dealt with firmness, which was not only right, but it was the duty of the Government to so deal with it”

To say Redmond’s pompous response to the executions was at odds with the widespread outrage felt by many Irish people is an understatement. And his path continued to diverge with that of his compatriots throughout 1917 when Sinn Féin gained electoral ground at his party’s expense. He was eventually replaced as party leader by John Dillon, who tried to resurrect the IPP’s standing in the eyes of the Irish electorate. But standing side by side with Sinn Féin in the fight against conscription was to be the death knell for the party.

From the very start, Sinn Féin’s elected politicians had refused to take their seats in the British parliament. After the vote to impose conscription on Ireland, the IIP withdrew, leading to the awkward if not quite accurate conclusion that Sinn Féin had been right all along in its abstentionist policy.

But it was the British reaction to the unrest in Ireland which dealt the IIP the final blow. In May 1917, 73 prominent Sinn Féin leaders including the party’s founder Arthur Griffith and its rising star Éamon de Valera were arrested and accused of plotting with the Germans. There was scant evidence of any plotting, a point not lost on either the Irish or the British people. All this achieved was to crown Sinn Féin the true and fearless leaders of the fight against conscription, effectively sidelining the IPP.

The involvement of the Catholic church in the conscription issue also lent Sinn Féin a new air of respectability. Younger priests in particular were increasingly becoming involved in the Republican movement.

Meanwhile, with the arrival of US troops in France over the summer of 1918, the fortunes of the allied forces began to turn. In November, the German Kaiser Wilhelm abdicated and two days later Germany signed the armistice. After four long bloody years, the First World War was finally over.

A month later, for the first time in eight years, citizens of the United Kingdom, including the island of Ireland, headed to the polls. It was a very different electorate. Firstly women over the age of 30 with property were entitled to vote, as were men over the age of 21. In the previous election in Ireland, just 700,000 people had the vote; in 1918 that figure had risen to 1.9 million.

Sinn Féin had made the most of the outrage caused by the conscription crisis boosting its membership significantly. It’s estimated that overall membership throughout the country increased from about 66,000 at the start of the year to 112,000 by its end. The party also built an effective election machine, writing guides to forming clubs and branches, pamphlets promoting its ideology, and even sending regular notes to newspapers. With new female and younger male voters now in the electorate, messages were targeted at their interests.

The IIP on the other hand were in disarray with several members withdrawing from even standing in the forthcoming general election.

In the end, Sinn Féin won by a landslide. Outside of Ulster, which had a large Unionist majority, Sinn Féin won every seat bar three. This despite the fact that 36 of its candidates were in jail, six were on the run, and four were abroad. The IPP limped home with six seats.

Legend has it that Father Michael O’Flanagan, joint vice-president of Sinn Féin said in the aftermath of the victory: “The people have voted Sinn Féin... what we have to do now is explain what Sinn Féin is.”

That was an issue that would be dealt with the following year as the first shots rang out in the Irish War of Independence.

This article was originally published in the July / August 2018 print issue of Ireland of the Welcomes. Subscribe here.